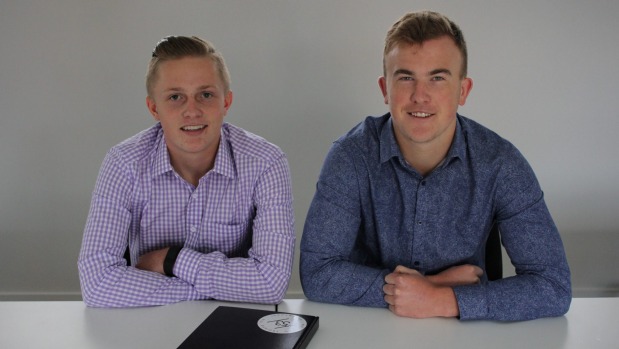 This time last year three students from Hawera High School were trying to come up with a business idea for their Young Enterprise Scheme (YES) class.

Now they’re in the real world and are working towards developing it for the long term.

Tim Preston, Joeb Cadman and Jordan Buchanan started the clothing brand 53 Streetwear because all the clothing they liked cost too much.

Preston said the main idea they went for with their business was low cost, high quality clothing.

“We looked at other companies and we thought for us it’s hard to afford a shirt that’s $75 and we just thought ‘why don’t we do it ourselves?’ and people around here can really benefit from it,” he said.

The clothing brand went on to win the regional YES competition during 2016, got to nationals in Wellington and released men’s and women’s clothing and accessories.

But the real world has meant the young men, who have finished school, must now juggle day-to-day jobs and their business.

“Basically we were in the middle of launching nationally recognised clothing or shutting the business down,” Preston said.

He and Cadman sat down and worked out long-term plans.  They decided they needed an investor of some form to keep moving forward.

“We’ve got more time for meetings and everything. We’re starting to kind of look into new products and new launches and new ways of getting our clothing out there,” Preston said. “We just need the financial backing with that just so we can get stock and do research into suppliers and the market.”

Cadman said they didn’t want stopping the business to be on the cards.

“We didn’t really want to think about it, we just wanted to keep going, become something bigger,” he said.

Preston said while the business had been off the radar the last few months customers have been asking questions.

“As soon as we went  quiet everyone was like ‘where have you guys gone?’”

He explained since then, it was all about moving forward, and not getting money off people, but people “investing to see a result”.

“Our long term goal is we want to be both fulltime, so we can actually invest our time, fulltime, into it,” Preston said.

“If people want to put money towards our business or be a mentor or an investor like that, then we’ll have our arms open.”

The young men have created a Give A Little for anyone interested in donating.