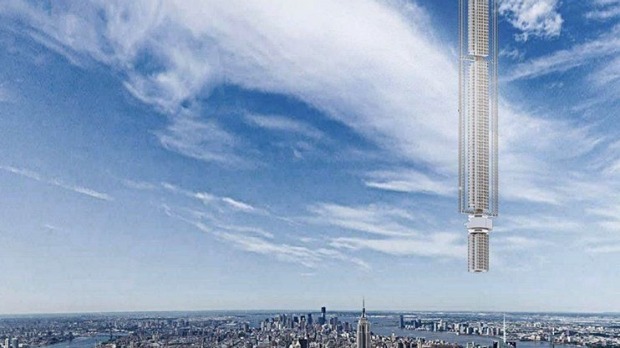 New York architects are pushing the boundaries of what’s deemed possible once more with a speculative design that’s straight out of sci-fi flicks like Elysium and 2012.

First there was the proposition of a skyscraper ring around Central Park, then the U-shaped ‘Big Bend’, and now a building that could one day dangle to Earth like an earring from outer space.

In a unique attempt to out-manouevre terrestrial height restrictions, New York based firm [the aptly named] Clouds Architecture Office has proposed suspending what would be the world’s tallest building from an asteroid.

According to Dezeen, the Analemma Tower proposed to be based in Dubai “taps into the desire for extreme height, seclusion and constant mobility”, and will “overturn the established skyscraper typology” by “harnessing the power of planetary design thinking”.

The design depends on “placing a large asteroid into orbit over Earth”, which a high strength cable is then lowered from, and the “super tall tower” suspended.

The architecture firm claims that “manipulating asteroids is no longer relegated to science fiction”.

The apparent construction benefit of the design is that it can be built anywhere in the world before being transported to its final location.

“If the recent boom in residential towers proves that sales price per square foot rises with floor elevation, then Analemma Tower will command record prices, justifying its high cost of construction,” wrote the firm.

However they would prefer the super building was constructed in Dubai, as it “has proven to be a specialist in tall building construction at one fifth the cost of New York City construction.”

The suggested spatial designation for the tower is for business to be conducted at the lower end, while residential apartments are approximately two thirds of the way up and “devotional activities are scattered along the highest reaches”.

To account for the different levels of pressure and temperature, the size and shape of windows fluctuate with height.

An extra bonus for the mega-elite who might occupy the top residential section of the tower is a 40-minute increase in daylight each day due to the curvature of the Earth.

To get to work or wherever, there’s a suitably futuristic “linkage system” (that looks a bit like a pod caught in a slingshot) to transfer people and goods between the tower and the ground. A parachute is also recommended as an option for disembarkation.

The orbit this space earring is proposed to be in is of the eccentric geosynchronous﻿ variety, meaning the Analemma would travel between the northern and southern hemispheres on a daily loop.

“The ground trace for this pendulum tower would be a figure eight, where the tower would move at its slowest speed at the top and bottom of the figure eight allowing the possibility for the towers occupants to interface with the planet’s surface at these points.”

Such as New York, the slowest point in the trajectory, so the structure will loom over Manhattan long enough for residents to come and go and the locals to feel like Independence Day has arrived.

The building includes dining, shopping and entertainment areas on the business level and a large “garden” and “agricultural” section above. Plus, right at the top, in ascending order there are “monument”, “worship”, “reliquary”, and “funerary” levels.