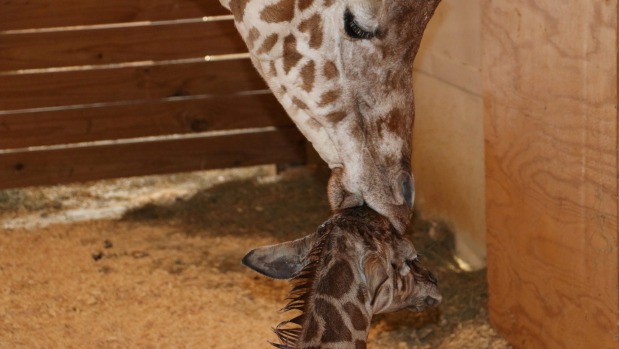 The one thing that can bring the world together in 2017 appears to be a pregnant giraffe.

A livestream from a New York Zoo’s giraffe house that ran for 66 days has come to its end, with the birth of a boy calf. His mum, April, had been due to give birth in February, but her calf wasn’t born until April 15 (US Time). By then, the internet was obsessed with April and her unborn calf.

A stationary camera streamed April’s enclosure live on Facebook, YouTube and an array of websites. According to Google, the YouTube stream alone attracted 232 million views that equated to 7.6 billion minutes spent watching.

Why was the world so captivated with a giraffe? What was it about this pregnant giraffe that caught the internet’s attention?

University of Auckland evolutionary psychologist Quentin Atkinson is an expert in memes – ideas that replicate themselves in our minds, grabbing our attention and going “viral”.

He said our fascination with April was a complex phenomenon brought about by a series of ingrained social reflexes.

“Memes are as complex as people,” he said.

According to Atkinson, memes succeeded when they appealed to one or more of the things people found intriguing.

April, being a giraffe, had already ticked that box by being a “charismatic animal”, Atkinson said.

As an evolutionary psychologist, Atkinson said the giraffe may have an advantage over other animals.

“For millions of years humans evolved on the Savannah around animals like that, so maybe it’s no surprise that humans are fascinated by it today.”

The suspense held viewers for an estimated 30 minutes per session, Google said. It was the second most viewed live event on YouTube ever, under Felix Baumgartner​’s space jump.

Watching the stream was a form of relief, where people could escape from pressing issues and watch the most exciting giraffe in the world, he said.