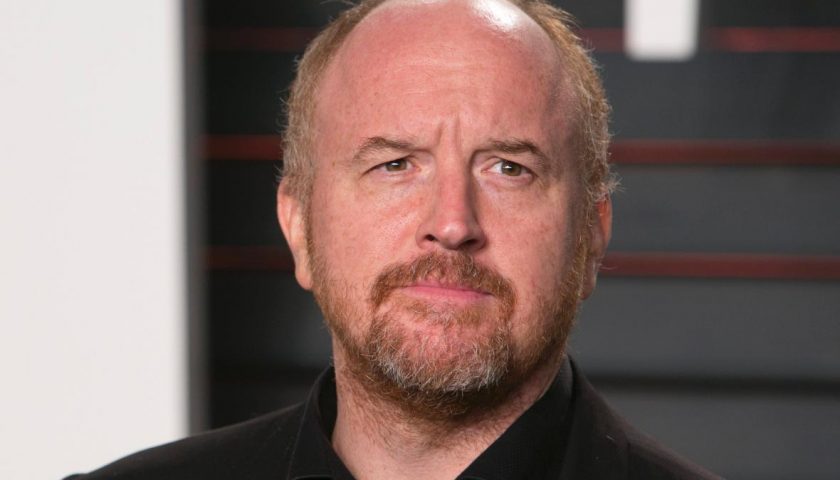 Comedians, in their capacity as cultural commentators, go where the conversation is. If a subject is in the ether, they are going to talk about it because people are thinking about these topics, and perk up when they are mentioned. This is in part because a large portion of the comedy-consuming public expects comedians to address the issues of the day. One of the most controversial conversations comedians are adding their voices to right now is trans rights, two of the most prominent examples being Dave Chappelle and Louis C.K., both of whom have jokes involving a trans person or trans people in their recent Netflix specials. Chappelle’s jokes—one per his two specials, released March 21—were widely derided. C.K.’s special just came out on Tuesday, and it’s possible his material will cause a blowback. But on a few levels, his jokes succeed where Chappelle’s fail. And as comedians will surely continue to weigh in on hot-button issues, there’s value in looking at how two of the greatest living stand-up comedians involved themselves in this conversation, and analyze the quality of the specific jokes they tell.

First, a disclaimer. This piece is not about offensiveness. I, a cisgender male, cannot and should not say what will offend anyone. Being offended, like laughing, is a deeply subjective, largely involuntary reaction. It’s possible that one might find any joke involving a trans person to be offensive—the time for jokes, one could argue, is when hate crimes against trans people aren’t on the rise. Or possibly you believe—reasonably, I might add—that jokes about trans issues should be left to actual trans people. To that, if you are unfamiliar, I direct you to Ian Harvie’s Seeso special from last year, and some of the comedy of Riley Silverman and Patti Harrison. While I am disclaiming, this is also not a piece about whether or not comedians should be allowed to say something onstage. Comedians can say whatever they want. They are allowed to tell offensive jokes, but that doesn’t mean the jokes are good, or that they cannot be critiqued. And in these cases, Chappelle’s jokes are not good, where C.K.’s are, at minimum, better.

Since C.K.’s joke and Chappelle’s two jokes are fairly long, I won’t print them in their entirety. I suggest you go watch them, if you have Netflix. (Chappelle’s jokes happen around the 33-minute mark and 38-minute mark in The Age of Spin and Deep in the Heart of Texas, respectively. C.K.’s comes around the 53-minute mark of 2017.) But to give you a general sense, Chappelle’s joke in Spin is about how, of the members of the LGBTQ community, transgender people “got the longest mental gap to bridge,” using how hard it was for him to personally accept Caitlyn Jenner’s transition as an example of why. In Texas, the joke is about going to a gallery party and seeing a trans person pass out from drugs; Chappelle recounts how he tried to help, and was called out by the other people at the party when he referred to her using the wrong pronoun. C.K.’s joke isn’t really a joke about transgender people (at least not at first), as much as it is a story about the first girl who agreed to go to a dance with him when he was a kid, and how midway through, she left him to dance with someone else, who later came out as a trans woman.

Already in those brief descriptions, you can begin to see why C.K.’s joke is stronger. It starts with the framing. In both cases, Chappelle’s trans sections are positioned as if he’s going to be making a point about trans people or the trans movement. The stories he tells in those sections—about Caitlyn and the gallery woman, respectively—are examples he uses to arrive at that point. C.K.’s joke is a story about himself, which eventually involves a trans person, but throughout, it stays personal. This comparative lack of specificity is at the core of Chappelle’s jokes failing. Both C.K. and Chappelle are using the transgender community to ramp up the relevance and tension of their jokes, but where Chappelle paints with a broad brush, C.K.’s use is deliberately drawn.

Let’s take a closer look at C.K.’s joke. Upon reading on Facebook that Jeff, the boy who stole his date, transitioned years later, C.K.’s response is, “Hooray for transgender people, but fuck you.” Though C.K.’s joke involves him expressing anger toward this person, it ultimately affirms their personhood. (Of course, a trans woman can be attracted to a woman, but that is besides the point C.K. is making—his joke is about the moment he had a very dude response to the Facebook post, not a reasoned appraisal.) In the less convincing portion of C.K.’s trans section, he talks about being envious of trans people, who in the face of the “tough road ahead” (both he and Chappelle refer to the fight as such, oddly enough) have figured out what was wrong with them, and were able to “fix” it. He jokes, “I’d give a million dollars to wake up, ‘Oh, I’m an owl.’” Though the joke isn’t perfect in terms of its word choice (a word like “fix” won’t age well) or its glibness, it has the advantage of coming clearly from a feeling of insecurity, and not the more common trope, which Chappelle uses, of being out of step with the times. This is what C.K. has always been best at—deriving comedy from a point of inner truth—and it’s why these jokes work and, at the very least, feel at home in the special.

The same cannot be said about Chappelle’s jokes, which are built around his opinions, namely: transgender people are going to have a hard time because, (a) it’s hard to understand changing your gender, and (b) the fight for transgender rights is inconvenient for him. Unlike C.K.’s joke, the specific trans people Chappelle mentions are not treated as individuals, but as generalizations to make his case. It’s a point that has been made a lot over the last couple weeks, but Chappelle, unlike Chris Rock, has never been at his best when acting as a social critic; and as a result, these sections are the weakest of his specials. (He does have one good bit from this section. In Spin, after he says that transgender people have a tough road ahead, he jokes, “In fact, I think the ‘T’ should stand for ‘tough road ahead.’” It’s a very silly joke, but a clever contrast of the seriousness of topic and the dumbness of punch line.)

Opinion- or argument-based stand-up tends to succeed based on the originality of point, and the strength with which it’s made—this is where Chappelle fails most significantly. His opinion is not novel, and neither is his case for it. For example, his take on “missing” Bruce Jenner is nearly identical to a bit Bill Burr was doing at the same time. I’m not suggesting that Chappelle lifted Burr’s bit, but that there is an unoriginality problem. Similarly unoriginal is Chappelle’s focus on the physicality of transgender women. Chappelle’s playfulness is at work here, as he acts out a joke where a transgender business associate walks around an office in heels, and then throws her old dick on a conference table to intimidate the people she is meeting with. But at its root are two hack ideas: transgender women are just men dressed up as women and, worse yet, transgender women are physically disgusting. Or take another cliché, from Texas, where the story builds to this punch line: “I support anyone’s right to be who they are inside, but to what degree do I have to participate in your self-image? Why do I have to switch up my pronoun game for this motherfucker?” My complaint here is not that it’s wrong for Chappelle to have the incorrect opinion on an issue, but that this opinion, this aversion to changing for the sake of another person, is an overused comedic premise.

I imagine some people will look at the last joke and focus on the part where Chappelle adds, “I support anyone’s right to be who they are inside.” The argument here would be, “He says he is on their side, who cares about a couple jokes?” It’s the “just joking around” defense that has allowed many comedians to build careers out of throwing old stereotypes around. Another defense might be that since Chappelle explicitly says he is a supporter, maybe the jokes aren’t transphobic, but commenting on transphobia. Maybe! The thing is, that demands a tremendous benefit of the doubt. Benefit of the doubt is a complicated tool in stand-up. And I cannot think of any comedian alive who gets more of it than Dave Chappelle. It is a part of what makes him so special. People trust him to be funny, which allows Chappelle to take his time arriving at a joke, building tension with long, laughless stretches and making the punch line hit that much harder. The problem is, when talking about complicated subjects, this benefit of the doubt can work against you. Chappelle is essentially in conversation with the audience, and how they respond to certain jokes tells him where to push and retract. Sometimes, like with these trans jokes, the audience is like an unintentional Road Runner, accidentally coaxing Chappelle’s Wile E. Coyote off the cliff’s edge, leaving him one downward look away from peril.

That’s what’s interesting, though: It’s very possible that the live audience loved Chappelle’s jokes. But the people streaming it at home on Netflix are not in that audience. Chappelle filmed these two specials without definite plans of releasing them, so he didn’t take into account that certain jokes would play differently to an audience that wasn’t there, to people who weren’t already die-hard fans ready to offer him a lot of leeway. And I get it. Chappelle is an incredibly present comedian—it is at the core of what makes him so great—and thinking of one’s performance outside of the moment might distract him. But it is, maybe more than anything else, what makes C.K.’s joke better executed. C.K. directed his special, and he did so with intention. Unlike Chappelle’s special, where you constantly see the audience, you never see it in C.K.’s 2017. C.K. shoots it like how you’d watch him if you were in the audience. Similarly, C.K. is deliberate in considering how the material would play at home. When I saw him perform a version of the set he eventually filmed for Netflix, it was looser. He took his bits further, not unlike Chappelle, based on the audience’s reaction. On Netflix, he is disciplined and careful. For example, C.K. subtly but purposefully shifts his pronouns right after he introduces the fact that Jeff came out as transgender, as a signifier of support. In so much as a joke is an attempt to communicate, C.K. wrote and shot his trans joke in a way that more people could understand him. Both jokes will likely seem dated in the hopefully not-so-distant future. The difference is, to many, Chappelle’s jokes, already seem like they’re from the past.

What is a good joke? What is good comedy? Must a good joke make you laugh? Must a good joke be inoffensive? As I said before, what makes you laugh or feel offended is subjective. But what is clear is that a good joke is better than a bad one. They are both great comedians, with great Netflix specials, but Louis C.K.’s trans jokes are better than Dave Chappelle’s. It’s not perfect—what would that even mean?—but the observation is more distinct, the punch line more surprising, and the structure more thoughtfully composed. Soon, someone will have a better joke than Louis C.K.’s. And so on. Comedy progresses.

See also: Jen Kirkman Turned Real-life Catcalling Into One of the Best Street Harassment Jokes Ever