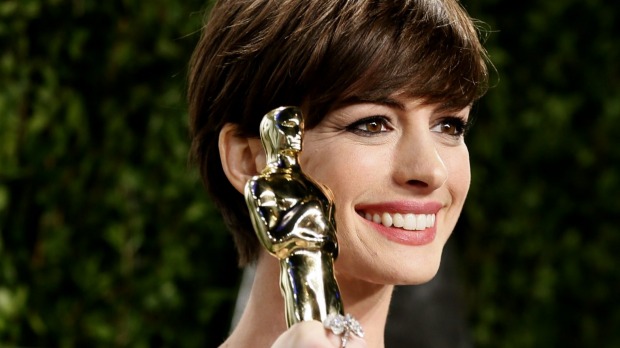 OPINION: Anne Hathaway is currently promoting her movie, Colossal, about how an alcoholic writer appears to have something in common with a Godzilla-like monster over the other side of the world.

The movie is being lauded for its portrayal of toxic masculinity, and as a metaphor for the subconscious rage of a woman, with critics calling it clever and subversive. All of which is interesting when you consider what’s happening on this press tour to Hathaway. She’s being asked about how it felt to be hated a few years ago. You may remember the flak she copped for her Oscar-hosting, the flak she copped for her Oscar acceptance speech. In summary, does Hathaway have an explanation for the Hathahate of 2013?

In an interview with Jezebel last week, she offered a five-star response to such hate; a thoughtful, candid explanation, complete with book reference:”I was just reading Susan Sontag: The Complete Rolling Stone Interview at lunch, and she said, I’m going to paraphrase it right now, ‘I don’t try to change other people – it’s so much easier to change yourself’. How the world feels about me has nothing to do with me. How other people treat me has nothing to do with me. “But if anything that anybody said resonated with me as something I’d like to work on for myself, I took it in like that. And to that extent, I feel like I got to shortcut a lot of my growth. To that extent, even though I wouldn’t have chosen to go through it, I still found a way to be grateful to it.” And this is exactly the problem. Anne Hathaway is so reflective and smart and, yeah, earnest, she’s being punished for it. Consider for a moment a world in which James Franco is still being asked about his (self-destructive) part in the Oscar-hosting fiasco. Consider a world in which Kanye West is probed for not just his ridiculous tweets, but his less-than-cohesive album(s). Imagine a journalist who, instead of asking Ivanka Trump if she’s complicit in her father’s administration, asks her husband Jared Kushner, a man with zero political experience, just what the hell he’s thinking getting involved in the Middle East.

Our culture has higher expectations for women. We want them to think through their choices, to elaborate, to take our feedback, (however condescending) and to try harder to please us. We write “not good enough!” on their report cards, while giving men a pass.

We want Lena Dunham to be more inclusive. We want Amy Schumer to recant her insensitive remarks. And sure, it’s understandable that we expect more from stars who incorporate their feminist brand into their work.

But we also demand to know how Angelina plans to raise her kids without Brad. We need a four-page story in Vanity Fair on exactly what Jennifer Garner is thinking, forgiving Ben Affleck.

It’s as if men are free to be careless, while women must not only be careful, but justify every single action along the way.

Hathaway drew ire because of her earnestness; her heightened emotional responses, which veered toward cheesiness at times. She’s been asked to explain her Oscar acceptance speech, which she did. But why did she have to?

While everyone was poo-pooing Hathaway’s speech, did anyone ask Russell Crowe what he was even doing in that movie, because he certainly couldn’t sing?

The Australian actor has never attracted the kind of hate reserved for his Les Miserables co-star, despite hardly ticking all the “likeability” boxes himself.

Remember when Crowe insisted on reading out a poem during his Best Actor acceptance speech for A Beautiful Mind at the BAFTAs? The broadcast cut it short, and he responded by slamming the BBC producer against a wall. But, you know, it’s Hathaway who is still being asked to explain her out-of-control emotions.

Like many male actors, Crowe’s angry and at times violent outbursts have been excused as a mark of artistic temperament. Arrogance too, but that’s considered justified in men of talent and star power.

Christian Bale’s abusive rant at crew members on the set of Terminator Salvation went viral, but is he still being asked to explain himself? The episode hasn’t exactly been forgotten, but it’s become just another piece of the narrative of ‘Christian Bale: Intense Method Actor’. Indeed, on-set beefs between male actors (like the time Crowe headbutted Peter Cousens in their Blood Brothers dressing room, or when Vin Diesel and Dwayne ‘The Rock’ Johnson had to be kept apart during their Fast and Furious 8 press tour) tend to be excused by such legitimate reasons as a “hot temper”, “blowing off steam” or “artistic differences” while the gossip media concocts fake “catfights” between female stars to make them appear “bitchy” (read: unprofessional).

But that’s the way we tend to look at male celebrities as a culture: even those who are accused or convicted of violent crimes have that side of them ignored in order to allow us to continue appreciating their talent. We have to separate the artist from their craft. The reason we do this, of course, is because we have lower expectations of men’s interpersonal behaviour. Men, our culture tells us, will be violent, they will break our hearts, they will say awful things.

It’s up to women to gather the pieces and dress better, try harder, learn to please. And if they look and act like Anne Hathaway, we demand perfection at all times. Men, they disappoint. Women appease.

This is why we have the erroneous belief that female celebrities owe us an explanation, even if the demand is that they explain to us why they think it is we hate them. Which sounds utterly ridiculous, but that is what has been demanded of Anne Hathaway these last four years.