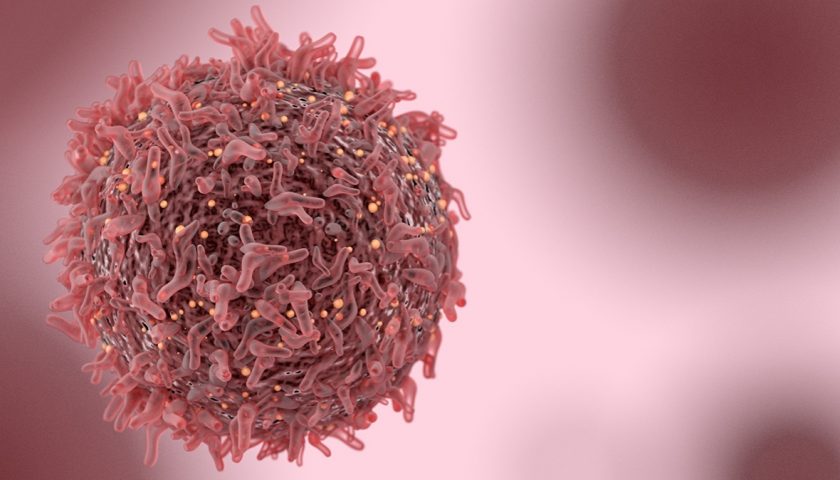 It’s been with us since the origins of multicellularity. It’s part of who we are.

This article is part of Future Tense, a collaboration among Arizona State University, New America, and Slate. On Thursday, April 27, at noon, Future Tense will host an event in Washington called “Do We Need to Stop Talking About ‘Curing’ Cancer?” For more information and to RSVP, visit the New America website.

If your life has been touched by it, cancer can seem like the least normal thing imaginable. It disrupts all aspects of life, threatens many things we hold dear, and baffles us with its mysterious ways. It seems possessed with an uncanny ability to evade our treatments, rise from the dead when we think it’s finally gone, and even hijack our bodies’ resource-delivery systems to feed its growth. But cancer has been with us since the beginning of multicellular life, and it’s not going anywhere. It has been a supporting character throughout humanity’s story. In fact, it predates us.

About a billion years ago, multicellularity began. Single-celled organisms started forming groups and using cellular teamwork to get an evolutionary leg up on their less social competition. This transition to multicellular living—from a solitary to a social lifestyle—had many benefits for cells, but it also had some costs. Cells in multicellular bodies had to give up much of the freedom of the unicellular lifestyle. Multicellularity meant several things, including cells not dividing so fast, reining in resource use, taking care of the extracellular environment, and sometimes even making the ultimate sacrifice: cellular suicide.

We descended from the cells that chose this path. Our bodies are made of highly cooperative cells that make trillions of sacrifices every second for the well-being of our entire organism. We are, in many ways, the most complex cooperative system known to humankind, though we rarely pause to think about the feat of cellular cooperation occurring within ourselves.

Our bodies are made of 30 trillion cells (that’s 500 times as many humans are on Earth) that achieve cooperation on a massive scale. But cooperation is not so easy, as anybody who has been on a team project knows. Even a small-scale cooperative venture is vulnerable to failure, whether through a lack of coordination, breakdown of division of labor, or—perhaps most relevant to cancer—exploitation by cheaters. The problem of cellular cheating in our bodies is the exact same problem that plagues cooperative systems everywhere. Cancer cells consume resources faster than normal cells, divide more quickly than they should, and literally leave a trail of acid in their wake. This is the cellular version of the tragedy of the commons: Our bodies are the commons, and cancer is the tragedy.

Cooperation poses an evolutionary conundrum because individuals can benefit from cheating and taking advantage of others’ altruistic behaviors. If evolution favors those strategies that garner the most benefits, then how could cooperation possibly evolve? Decades of research in evolutionary biology have led to two classic solutions to this problem. One is reciprocity: when cooperators get some future benefit from helping. The other is genetic relatedness: when the cooperative acts benefit kin who share genes coding for that cooperative behavior. In the case of the cellular cooperation going on inside our bodies, it is the genetic relatedness of our cells that made cooperation viable. Cooperation makes evolutionary sense for large multicellular organisms like us because the cells in our bodies are highly related to one another. A cell’s self-sacrifice ultimately benefits those that share its genes.

For example, consider a liver cell working hard to detoxify the wine you had with dinner last night. If you are more likely to survive and reproduce as a result of this effort, the genes coding for hardworking liver cells will get passed along to your offspring. If, on the other hand, your liver cells cheat—by shirking their duties, overconsuming resources, and dividing out of control—the genes coding for that cellular bad behavior won’t get passed to the next generation.

The same is true of the systems for policing cellular cheaters. If you have a well-functioning cheater policing systems (including immune system and cell division controls), you are more likely to survive to reproductive age and pass the genes coding for these systems along to the next generation.

But even the most cooperative bodies cannot completely control and suppress cellular cheating. Our bodies are like a massive public goods game with the highest possible stakes. Cells within us are constantly dividing, growing, using resources, and surviving or dying within us. Every time a cell in your body divides, there is some chance that a mutation will happen in the genes that code for multicellular cooperation. And those mutated cells can cheat in the rules that make multicellularity work: monopolizing resources, proliferating out of turn, and trashing the environment that they share with other cells.

When the cells in our bodies start to cheat in the foundations of multicellular cooperation, this creates an ecological problem within our bodies. Resources (like glucose and oxygen) get depleted, cells get overcrowded, the environment gets trashed by acid and other cellular waste. This is the cellular equivalent of the tragedy of the commons. Our immune systems are constantly policing the body, looking for and eliminating cells that are overconsuming, overproliferating, and generating too much cellular waste. But they can’t stop every wayward cell from exploiting the environment of the body. And if this ecological problem persists, then it can escalate into an evolutionary problem: a tragic game in which cellular cheaters win out in the evolutionary race to proliferate, acquire resources, and survive.

This evolutionary problem is the reason that we get cancer. In fact, we could say that this evolutionary problem is cancer. Once cancer cells gain the abilities to exploit the resources of the body and proliferate without the usual controls, then cellular evolution just happens and doesn’t stop, even though it may be racing toward the ultimate evolutionary dead end: host death. This harkens back to the problem of how cooperation can be viable in the first place. If cheaters can do better than cooperators in a population, they will expand in that population. This is exactly what happens in cancer. Cancer cells outcompete normal cooperative cells, and evolution takes it from there.

As cancer progresses, the evolutionary and ecological dynamics interact, making treatment and clinical management extremely complex and challenging. Take, for example, drug resistance. A tumor is a population of diverse cells living in a very complex ecological environment in our bodies. Some cancer cells live nearer to blood vessels that deliver resources; some cells live in regions with high acidity and cellular waste products. This means that when a drug is administered through the bloodstream, some cells will experience high doses while others get lower doses. And since cancer cells can be highly mutated and the population sizes of even small tumors are huge (in the millions), it is highly likely that somewhere in the tumor there will be at least a few cells that can survive in the presence of the drug. Those cancer cells that do survive will then have an open field upon which to grow back, with little competition from other cancer cells. In ecology, this process is called competitive release.

So every time a tumor is treated with a medication, that drug can become less effective. The mere act of administering the drug actually selects for cells that are resistant to it. One way to get around this problem is to use lower doses of drugs and treat the tumor only when it is growing. This approach, called adaptive therapy, is currently in clinical trials at Moffitt Cancer Center in Tampa, Florida, and early results are promising. (I collaborate with Robert Gatenby at Moffitt on modeling adaptive therapy but am not involved with the clinical trials.)

Metastasis is another problem rooted in ecological and evolutionary dynamics. As cells evolve to monopolize resources and overproliferate, they create a less favorable environment, which then selects for cells that can move and find a new, less exploited environment. Metastasis happens when cells leave the primary site of the tumor and colonize new areas of body, usually in large clumps or colonies of cells. We still don’t quite understand exactly how they do this, but research suggests that the cells in these metastatic colonies might actually be cooperating with one another to better exploit our bodies. Signaling for blood vessels, avoiding the immune system, and detoxification are all complex cellular behaviors that can be better accomplished by groups of cells than by individual cells. To what extent cells in metastatic colonies cooperate is an open question—but it’s perhaps the most exciting one in cancer research right now. If cooperation is required for successful metastasis, it opens up a new opportunity for treatment: targeting and interfering with cancer cells cooperating with one another.

One of the reasons that we get cancer is because our natural cheater detection systems sometimes fail. Our cells have internal checks to make sure they don’t proliferate with mutations, but the genes coding for these internal checks can themselves mutate. Our bodies have other backup systems, including a vast network of immune cells that constantly police for cells that are behaving inappropriately. But the policing that the immune system becomes less effective over time because cancer cells evolve to be able to be better at hiding from immune cells, just like prey evolve to be more successful at evading predators. Restoring the immune system’s ability to detect these cellular cheaters has been an effective approach to treatment. The immunotherapies that block the ability of cancer cells to hide from the immune system (called immune checkpoint blockade therapies) can be very effective in previously intractable forms of cancer, including melanoma and lung cancer.

Cancer is a normal part of being a large and complex multicellular organism. But that does not mean it’s inevitable. Evolutionary and ecological approaches to cancer point to many things we can do to reduce our risk. For example, we can slow down the mutation rates in our bodies by reducing inflammation. (Studies have shown that nonsteroidal anti-inflammatory drugs like Aspirin reduce mutation rates and progression to cancer.) We can also keep the ecological conditions in our body more stable by exercising, eating well, and sleeping well, making it less likely that a boom-and-bust evolutionary process will select for opportunistic cells that rapidly proliferate and consume resources.

But there may be many more opportunities to reduce our cancer risk that researchers haven’t yet considered. As we look to the future of cancer, we should be asking: What we can do to fortify the cooperation our multicellular bodies are built on? How we can support our natural cheater detection systems like our immune system? And can we interfere with cancer cells ability to cooperate with one another to reduce metastasis?

We are all vulnerable to cancer. It appears across the tree of life in almost every multicellular organism that has been studied, from humans to elephants to cacti. We will never be able to completely eliminate it. Susceptibility to cancer is simply the price we pay for being a complex and highly cooperative cellular society. Given how successful multicellular life has been on this planet, it must be an evolutionary price worth paying. But we can work to reduce our vulnerability to cancer by slowing down evolution among our cells, creating a stable ecological environment in our bodies, and supporting the cellular cooperation that defines us.