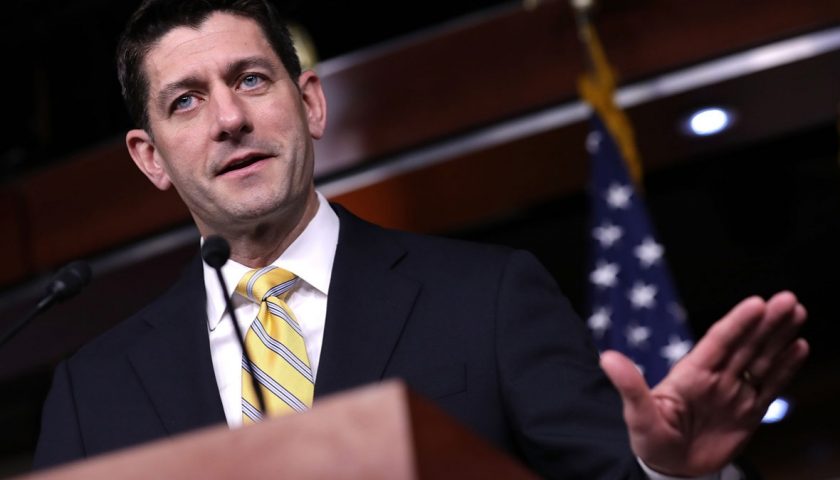 At what point will Republicans finally either move on Trumpcare or give up for good?

Rep. Tom MacArthur, the New Jersey congressman who authored the amendment that brought the American Health Care Act back to life earlier this week, made a very simple point Thursday afternoon when asked if Republicans had enough votes to pass the bill.

“If so,” he told reporters, “we would have already voted on it.”

He’s right. Instead, the week of Trump’s First 100 Days ™ will come and go without a vote on the president’s revived health care legislation, due to a lack of votes. They didn’t have the votes in March, infamously. They didn’t have the votes during the revival of Trumpcare discussions shortly before the April recess, either. And they do not have the votes now, following an intense whipping effort Thursday that, at the end of the day, House leaders recognized had come up short. That vote may come next week or the week after that—whatever the moment is that they have the votes. That moment may never come.

House leaders’ plan was to get conservative holdouts on board and then pressure just enough moderates and other vulnerable swing-district members to fold. They achieved the first part on Wednesday. It became clear as Thursday afternoon rolled on that the second was a knottier task than expected. More moderate or otherwise vulnerable members seemed to be moving toward either “no” or “undecided” and away from the bill—Florida Rep. Mario Diaz-Balart, Colorado Rep. Mike Coffman, California Rep. Dana Rohrabacher, and Iowa Rep. Steve King, to name a few—than there were joining up.

The House whip team, led by Majority Whip Steve Scalise and his chief deputy, Rep. Patrick McHenry, were having lengthy chats on the House floor Thursday afternoon with recalcitrant members. It wasn’t just the well-known holdouts, either. Some members assumed to be yes votes, such as Kansas Rep. Kevin Yoder or Michigan Rep. Bill Huizenga, also appeared to engage in long conversations of the soul with the whip. Elsewhere, Oregon Rep. Greg Walden, chairman of the Energy and Commerce Committee, was spotted chatting up New Jersey Rep. Leonard Lance, a formerly immovable no vote who has the political misfortune of having already voted part of the AHCA out of Walden’s committee.

For the holdouts who were no originally and remained no, the problem was still the underlying severity of the bill, which would result in an estimated 24 million fewer people with insurance, largely due to drastic cuts in Medicaid. Those who moved away from the bill since the MacArthur amendment, though, were more spooked by its unraveling of protections for those with pre-existing conditions.

New York Rep. Chris Collins, a Trump ally who’s trying to sell the bill to recalcitrant moderates, has told them that they have nothing to worry about. Few if any states are going to apply for these waivers, in his opinion.

“The thought that we need to be worried about a governor disadvantaging his own constituents and population, I don’t think that is a common sense cause,” he said Friday morning. “Which is what some of the folks are saying: ‘Oh my God, a governor’s gonna do this or that to their population.’ Well, that governor won’t be governor anymore.” He said the inclusion of these items that he admits would be terrible for people if states take them up was just a matter of “appeasing the Freedom Caucus.”

Collins dislikes the Freedom Caucus. But even he had to credit its members for the way they played this—sticking together as a bloc, weathering all sorts of pressure, getting the bill changed to their liking, and eventually tossing the “hot potato” to the holdouts of the Tuesday Group. Freedom Caucus members “really do know how to play the game,” he said, and now Tuesday Group members have to eat it. “Life’s not fair,” he said.

It’s possible that the bill could be amended further to bring the necessary votes on board. That could mean either plowing more money into the bill’s state stability fund—designed to protect a state’s sicker population—or lessening the severity of the Medicaid cuts. Leaders will do what they can, but no formal proposals have been put forth yet and aren’t expected; they also don’t want to include changes that could send conservatives fleeing yet again. Additional assurances from the White House and Department of Health and Human Services on the regulatory side are likely the best the moderate holdouts will get.

And if that, too, fails to bring them on board, what’s next? According to one key member of the House, the chamber wouldn’t be done legislating on health care even if the AHCA was eventually buried for good.

Freedom Caucus Chairman Rep. Mark Meadows, the member in question, looked the most relaxed he’s ever been on Friday. The mobs of reporters that used to follow his every footstep have dissipated into mere handfuls since he brought his votes on board. Though fully committed to passing the AHCA, he did allude to the existence of “a couple of other backup plans” in case the AHCA never reaches a majority.

He seemed to recognize that he shouldn’t be talking about this prospect but continued anyway. The “generics” of the backup plans would include making “tax credits more accessible to those below 400 percent of the federal poverty line” to “make sure that what we’re doing is lowering the net premiums people pay,” he told reporters, and “high-risk pools [that] actually lower premiums even more [than] what we had proposed.”

I asked him if this was … an existing bill? Who did it come from? What was he talking about?

“And again, if you’re going to report something, I want to be clear: I’m all in for this particular bill, with these particular amendments, to try to get it across the finish line,” he continued. He simply thought “it would be disingenuous to suggest that there’s not a Plan B or C.”

Again, he cautioned not to report that the GOP was already moving to Plan B or C, which they are not.

“We’ve gotten into a bigger discussion on Plan B or C than I thought we would,” he did note, with a touch of unease.

Meadows was one of the last Republicans left lingering by the House floor on Friday. The workweek was finished, and members were preparing to head to the airport. It was an early conclusion to another day that ended for the GOP without the votes to pass the AHCA and thus without a vote on the AHCA. How many more of these days will they suffer through before moving on to the next thing?