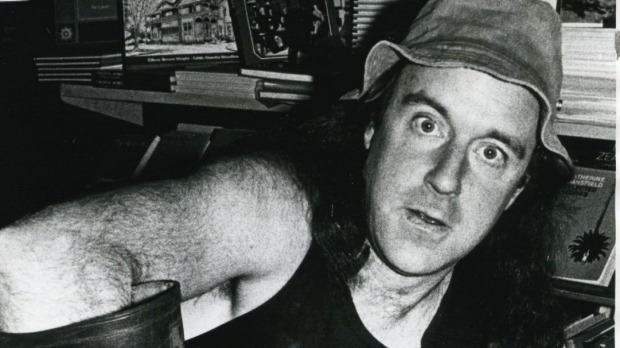 There he was, large as life and oh so familiar, signing autographs on a September afternoon in 1976 in downtown Palmerston North.

But there was something wrong. “Where are ya gumboots?” yelled a cheeky fan.

They were booked for two nights at the Regent theatre, which had suspended movie screenings for the show.

He was at the peak of his fame as the stereotypical Kiwi farmer Fred Dagg, whose laconic humour was quoted throughout the country at the time.

Manawatu Standard reporter Paul Dykes interviewed him during his personal appearance, and wrote a front-page story.

“John Clark [sic] doesn’t seem to understand his brainchild, Fred Dagg, but he’ll happily ride him out until he dies,” he wrote.

“The role of the black-singleted satirist comes easy, he says. It’s just a matter of doing what he enjoys doing most.

“‘It’s called job satisfaction,’ the man said as he signed autographs at a city shopping mall yesterday. ‘Employee participation – at board level.’

“He seemed to be uncomfortable as the endless wall of faces thrust scraps of paper into his hand, with a request for a certain greeting.

“After a couple of years doing a post-varsity around the farms, doing whatever job was offered, our Fred had no problems designing his stage suit.

“‘I was going to send to Paris for some designs but decided not to, because it was a waste of our overseas funds. Besides, we have some classy designers here, especially after the [Montreal] Olympics.’

“He sees the Olympics as an event staged to take our minds off the economic plight of the country.

“Most of the autograph seekers were children; but that wasn’t his main market, he said.

“He thinks New Zealand is a great country for satire.” the reporter added, “and Palmerston North is a great town for idiots”.

“He has run across a few genuine Mr Daggs, and says they are very fascinating people. The early resentment the farmers showed to him has passed, and now he is great mates with them.”

Today, Tauranga-based journalist Dykes says, “it would be interesting to know if the autograph hunters still have their scraps of paper and memories”.

“I remember nothing about the band side of it, I was just a cadet journo at my first newspaper who was thrust up against a megastar.

“I feel I extracted the gags out of him, that he wasn’t completely relaxed and ‘in character’ that early in the morning.”

In his 1976 review of The Fred Dagg Show, he wrote that John Clarke didn’t take the stage as often as the audience would have liked, adding: “But let’s not take any credit from Fred Dagg. Everything he did was funny, typical and a cut above, even if one of the sketches was first performed in 1971 at a Victoria University revue.

“So if it’s Fred Dagg you want to see, and you don’t mind an awful lot of window-dressing, take in the show. If you miss it, the SIS will want to know why.”

A few weeks later, Clarke was again on the Manawatu Standard’s front page – as winner of the New Zealand Entertainer of the Year award.

“Man behind the Dagg”

John Morrison Clarke was born in Palmerston North on July 29, 1948. He was a pupil of College Street School, remembered as a tearaway flanker in the school’s first 15.

At Victoria University, he hung out with Roger Hall, Sam Neill, Ginette McDonald, and Paul Holmes – who was president of the university drama society. The Fred Dagg persona first appeared in a capping show directed by Roger Hall, and reworked as the Brian Edwards’ Travelling Road Show.

It was about a bunch of students, living in a Wellington flat with a doorbell that rang the first six notes of God Save the Queen.

In 1977, Clarke and his wife Helen moved to Melbourne.

Clarke’s Australian popularity as a scriptwriter, satirist, and media personality, was rewarded with an induction into the Logie Awards Hall of Fame.

Back home, Fred Dagg remained an all-time New Zealand legend, along with his signature songs: The Gumboot Song and We Don’t Know How Lucky We Are. The iconic Fred Dagg outfit reposes at Te Papa.

Clarke told the Listener’s Fiona Rae in a March 2006 interview: “I gave it to them because it was sitting in my house and I thought it might get mouldy. I used to mow the lawns in the gumboots, but I thought I should be a bit more sensible and give it to them.”