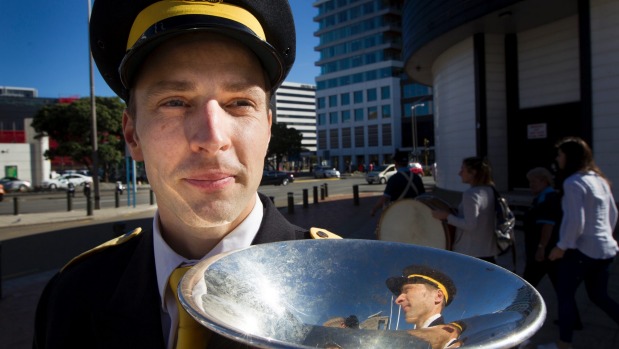 The Wellington Brass Band went for an unconventional approach in a bid to extend its dominance of the national competition, including a Star Wars-themed duel in its march along Wellington’s waterfront.

In the first band event of the four-day New Zealand Brass Band Championships, on a sparkling Friday in the capital, the Wellington band threw Darth Vader and a Jedi knight into the mix as they played songs from the cult movie series.

The characters moved down the waterfront in front of the 35-strong band, which played The Imperial March and the infamous theme song as hundreds looked on.

Band coordinator and euphonium player Byron Newton said it was not the first time the band had given the event a shake-up.

“The last few years, we’ve been trying to do newer music, something that the general public can relate to.

“And this year there’s an entertainment prize, so I thought we’ll take it that step further and come up with a theme, and do something a little bit different with the marching.”

The arrangement was probably the most challenging one the band had attempted, and the crowd seemed to enjoy it, Newton said.

“We try to keep it reasonably simple so it wasn’t anything that we can’t do.

“There was a bit of slow marching but otherwise it was quite easy to rehearse, but just something that most bands don’t bother to do.”

Newton noticed some other bands had also tried to play less traditional music in recent years.

The band came second in the march event last year, before taking out its fourth consecutive overall title.

It was hoping to break the record this year for the most consecutive national championship wins as it chased a fifth banner in a row.

Newton thought the band was probably in line for a second or third placing in the marching, but was shaping up well in the other band events and was hoping to retain its title.