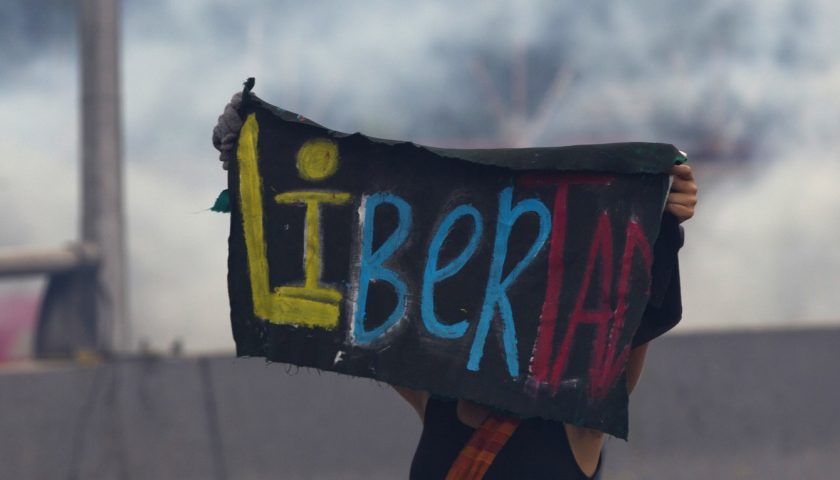 Around 2,000 Venezuelans live in Dublin.

ON THURSDAY, CLASHES erupted between police and protesters rallying against the Venezuelan government, after officials said a fifth person died from being shot during earlier unrest.

Socialist President Nicolas Maduro is fighting off efforts to oust him as Venezuela, once a booming oil exporting nation, struggles with shortages of food and medicine.

Dozens of people have been injured and more than 100 arrested over the past week in clashes in various cities, according to authorities.

Here in Dublin, a solidarity protest will take place today in Smithfield at 2pm in support of those protest.

Organiser Betzy Median told TheJournal.ie that the situation is “a mess”.

“There’s no food, there’s no medicine, but the government are trying to hide it.”

Dublin has a small Venezuelan community, but no embassy here, with around 2,000 living in and around the capital. In total, it’s estimated around 7,000 Venezuelans call Ireland home.

While many Irish people assume the oil-rich country is functioning well, Betzy says that the situation is more complicated.

It’s not just that people with money want socialism ended. It might have started like that for some people, but the government started buying media and starting massive projects that weren’t finished. There are more than 100 political opposition in jail. They’re now calling them the rebellion, not the opposition.

“The government go on TV and pretend nothing is wrong. Some people think you have to support the leader no matter what, but people are dying in the streets.

A demonstrator kicks a teargas canister towards Bolivarian National Guard soldiers during an anti-government protest in Caracas, Venezuela.

The next major organised rallies called by opposition leaders are set for Wednesday next week.

That is expected to be the next big showdown in an increasingly fraught crisis that has raised international concerns for Venezuela’s stability.

The opposition is demanding the authorities set a date for postponed regional elections.

It is also furious over moves to limit the powers of the legislature and ban senior opposition leader Henrique Capriles from politics.

Those moves have raised international condemnation including from the United States and the European Union.

Maduro has resisted opposition efforts to hold a referendum on removing him, vowing to continue the “socialist revolution” launched by his late predecessor Hugo Chavez.

Maduro says the economic crisis is the result of what he calls a US-backed capitalist conspiracy.