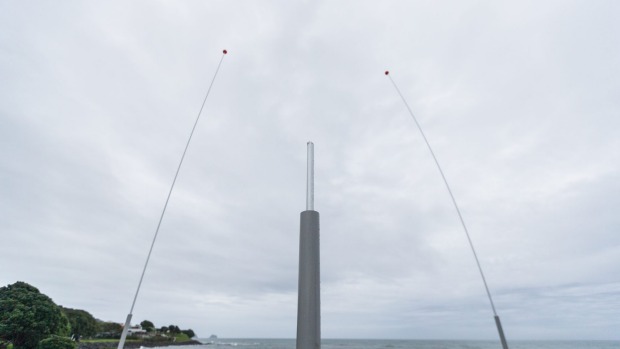 There’s one less wand waving on the walkway after vandals snapped off one of the poles that made up a new public artwork in New Plymouth.

The centre wand of Waving Wands at the East End Reserve was snapped off just above the support on Wednesday morning.

The Len Lye kinetic art cost $150,000 and was funded by the Art in Public Places Trust and unveiled in March.

Art in Public Places Trust chairman Terry Parkes is convinced it was a deliberate act.

“It did get broken off. The police are aware of it.

“It would’ve been quite difficult to do. They’ve evidently gone to quite a bit of trouble to break it off.”

He is “very confident” that the vandals will be caught.

The security cameras around the structure have been upgraded today and can now record a closer view and are turned on 24/7.

He says ongoing maintenance of the artwork is part of the contract they have with John Matthews, which will cover the cost of the repairs.

The wands were first vandalised even before the official unveiling last month.

The five 12 metre wind wands are set in a circle, with the 14 metre wand in the centre having been snapped off.

But Parkes says that vandalism isn’t too much of a problem.

“Not at all…part of the brief of having art in a public place is to be vandal-proofed and [have] longevity.”

He concedes that nothing will be completely vandal proof.

He says that people will climb on them, and there’s not a lot they can do “short of putting a great big grated wire around it which we don’t want to do.”

He says the feedback has been incredible.

“I’m always looking at the paper for anti [statements] but there hasn’t been any. It’s just been 100 percent love from everybody.”

He says they would like New Plymouth to be an arts centre.

“Art’s hugely important for the life of the city.”

The wands had previously been on top of the Pulitzer Museum in the United States.