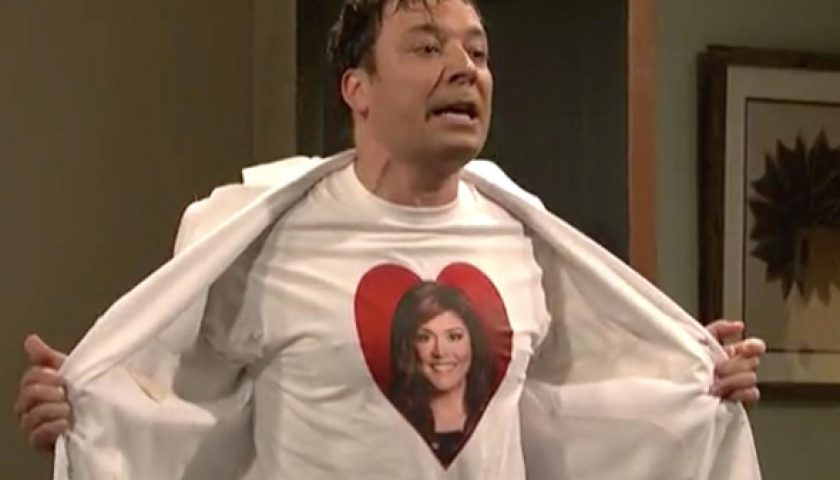 Usually, Saturday Night Live sketches are based around a premise that allows for lots of small jokes instead of one big one: first you establish that “the Loud family” talks too loudly, then you hammer the audience over the head with it for about five minutes too long. That wasn’t the case this week, however: host Jimmy Fallon interrupted a romantic moment between Cecily Strong and Beck Bennett in a sketch that’s structured like a classic joke, setup, punchline, and all. It’s too good a payoff to spoil; see for yourself.

But to land the punchline, the setup, in which Fallon sings a terrible version of Savage Garden’s “Truly Madly Deeply” in an effort to win Strong back, has to look like it might be the entire point of the sketch. Fortunately, Fallon somehow manages to make the first two minutes appear profoundly mediocre, despite Strong’s best efforts to elevate things with great reaction shots. (This week, two other sketches were built around Fallon’s singing while a third was built around other people singing badly, so this sketch kind of blended in with its surroundings.) But the ending is funny enough that all is forgiven.

Weirdly, it’s not the first time the show has taken aim at Savage Garden recently—when James Franco hosted back in 2014, Taran Killam busted out an impression of lead singer Darren Hayes—and it probably won’t be the last. The duo never appeared on Saturday Night Live in person, although the show has invited many other notable Savages: not just Fred, but his mother Joanne Savage and his sister Kala Savage. (Neither The Savages nor Savages got to send a cast member to host, but one film came out during a writers’ strike and the other in the summer, so no hard feelings, presumably.) Lorne Michaels famously failed to get the Beatles back together; is he trying, in a roundabout way, for a less ambitious reunion here? If so, there are probably easier ways to get at least half of Savage Garden on Saturday Night Live: in the years since the band split up in 2001, Darren Hayes has moved to Los Angeles, where he hosts more than one podcast about comedy and takes classes at The Groundlings. Make the call, Lorne!