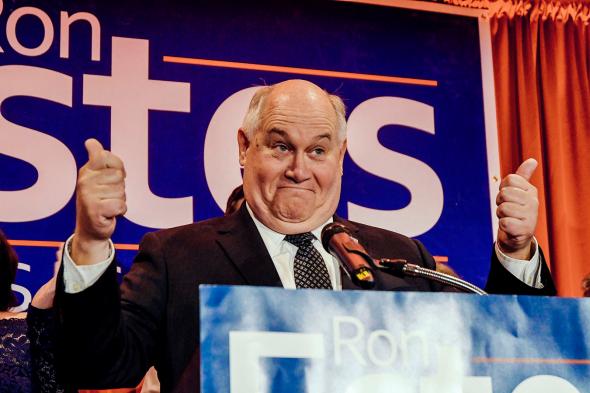 A tight special election in a deep-red district may reveal cracks in the conservative coalition.

Maybe Tuesday night’s narrow Republican win in Kansas was a fluke. Yes, Ron Estes won the House special election by just 7 points in a congressional district that Donald Trump carried by 27 points in November. But Estes is the Kansas state treasurer, and as such he has worked closely with Gov. Sam Brownback, who has the unenviable distinction of being America’s second least popular governor, with an approval rating in the mid-20s. Estes’ Democratic rival, Wichita civil rights lawyer Jim Thompson, made the shrewd move of focusing on local issues and portraying Estes as little more than Brownback’s flunky. In the end, a last-minute assist from Team Trump seems to have been enough to put Estes over the top.

You could argue, then, that the squeaker in Kansas’s 4th Congressional District is not a sign of things to come in 2018. But I wouldn’t be quite so confident.

There is no doubt that the congressional map favors the GOP heading into 2018. Because Democratic voters are concentrated in densely populated urban areas while Republican voters are more typically found in rural areas and sprawling outer suburbs, even a completely neutral redistricting process would give GOP candidates an edge. But the Kansas special election, for all its peculiarities, showed there are weaknesses in the conservative bloc that Democrats can exploit. The most important of them, I suspect, is that there is a big difference between what “conservatism” means to Republicans in Congress and what it means to self-identified conservative voters.

Throughout the race for the GOP presidential nomination, constrained conservatives were baffled by Trump’s popularity, as—in their view, at least—he was clearly not a conservative. They underestimated his appeal to moral conservatives, who overlooked his personal foibles on account of the belief that he’d defend their interests. Conflicted conservatives favored Trump as well, as they had little familiarity with (or interest in) the finer details of small-government orthodoxy. Taken together, these two big clusters make up about two-thirds of the conservative camp, and neither of them is all that wedded to the cause of shrinking government.

The size of those two groups helps explain why the GOP’s health care misadventures could be very costly. When congressional Republicans spent the first weeks of the Trump administration on an Obamacare overhaul that would drastically reduce taxes on high-income households while slowly rolling back the Obamacare Medicaid expansion, they didn’t just meet with resistance from liberals and moderates. They alienated self-identified conservatives who see Medicaid as a lifeline or who believe efforts to shrink government should focus solely on waste, fraud, and abuse. Indeed, a Quinnipiac survey conducted late last month found that Republicans opposed cutting federal funding for Medicaid by a 54 to 39 percent margin.

None of this should have come as a surprise. The fact that Trump won over so many conservative identifiers was itself a sign that constrained conservatives—the people who embrace the total package of conservatism—are a minority in the Republican coalition. While Trump seemed to appreciate that fact on the campaign trial, he’s been adrift in office. By default, he’s ended up embracing a not terribly competent brand of constrained conservatism. For weeks, the president and his allies have been singing from the conservative hymnal on Obamacare (let’s repeal and replace it), the size of the federal government (let’s shrink it), and taxes (let’s cut them). The political results—so far, at least—have been less than encouraging. Trump’s approval rating is lackluster, Republicans in Congress are not particularly eager to do his bidding, and Democrats are feeling united and feisty, confident they’ll be in good shape if they oppose everything the president does.

Which leads us back to the special election in Kansas’s 4th Congressional District. There are deep-red Republican districts just like Kansas’s 4th in much of Middle America. Many conservatives in these districts worry their elderly parents might lose their Medicaid coverage or sense that Wall Street billionaires are paying far less than their fair share of taxes. During his tenure as the chairman of the Democratic Congressional Campaign Committee in the mid-2000s, Rahm Emanuel managed to recruit candidates who could win in the Deep South and the Midwest by exploiting the very large ideological gap separating the constrained conservatism of GOP lawmakers from the less ideologically rigid conservatism of rank-and-file voters. Whether Democrats can pull off that feat again is an open question. What we can say with certainty is that Republicans have given them a huge opening.