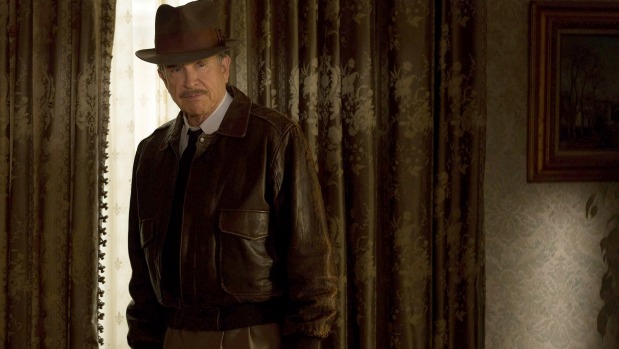 By golly, this handshake is going on for ages.

“Have we met before?” he says, closing in for a better look. No, I say.

He grins roguishly and, just for a moment, I’m looking down the barrel of 50 years at Clyde Barrow. Unfortunately, I’m no Faye Dunaway.

There is a laugh, then a silence; he is still shaking my hand. He may be all of  80, with 24 years of faithful marriage clocked up so far to the fabulous Annette Bening and four almost grown-up children to show for it, but he can still turn on a very convincing performance as Warren Beatty.

As for other performances, it has been 15 years since we saw him on screen, apart from a Dick Tracy TV special in 2010, and that awkward moment at this year’s Oscars.

Even in absentia, he has remained near the top of the list of favourite movie stars, so it is something of a cultural event to see him back with a film he wrote and directed.

His grand plan is to get Hughes interested in backing his ideas for developing housing estates in the Hollywood Hills.

In real life, Hughes was an aeronautical engineer with his own airline and substantial defence contracts that gave him a lot of political clout during the Cold War; he also owned RKO Pictures, where he took a keen interest in making war films, maintaining a stable of starlets and having much-photographed dates with the most glamorous stars of the day.

Like Beatty, he had a reputation. But it was a different story for his employees. Under his rules, any driver found dallying with a starlet would be sacked on the spot, which spells plenty of crossed stars for the fictional Marla and Frank.

Beatty plays Hughes. He is supposed to be a secondary character but of course, as soon as he hits the screen, he takes over.

He plays Hughes as likeable but mad and muddled, with at least some of his better-known eccentricities on show: the meetings conducted in the dark, the bottles of urine, the maniacal flights in small planes, the fact he repeats himself like a malfunctioning mechanical toy. A man with a lot of power but no sense: it is impossible not to see a modern parallel, but Beatty brushes aside the Trump question. He’s been hatching this story since the 70s, he says. Anyway, it’s not political.

“I want to tell you not to take it so seriously,” he says at one point. It is a romantic comedy, he says. A light romantic comedy. That’s what it is. Sometimes I feel as if I’m talking to Howard Hughes himself.

Hughes had actually sold RKO in 1955, but the film wasn’t about him so that didn’t matter.

“I was interested in Howard Hughes initially as a somewhat comedic device; he represented something I saw in Hollywood when I first came in the 50s,” Beatty says.

“What I wanted to do was make a light romantic comedy about a couple of religious kids who come to Hollywood, which was not a particularly religious place, let’s say.

“And I thought Howard Hughes, in his very carefully governed mystery, the most entertaining device to use as an obstacle to that romance.”

He didn’t know Hughes. “I would not be as free making him a character in a film if I had, but I never met him,”  Beatty says. “I feel I met everybody else.”

Beatty came to Hollywood – along with his sister, Shirley MacLaine – just as the studio system started to go into decline.

At first he only scored sitcom roles; his real breakthrough came when he was persuaded to return to New York to do a play on Broadway and was spotted by director Elia Kazan, who had made On the Waterfront and East of Eden.

Kazan had sufficient sway to be able to cast this handsome newcomer in a lead role in Splendour in the Grass (1961), opposite Natalie Wood. Interestingly, that film was also a story of frustrated high-school sweethearts kept apart by moralising elders. Beatty has spent his life rebelling, one way or another, against the sexual repression of his childhood.

Young Warren and Shirley (who took her mother’s maiden name) grew up in Virginia; their parents were liberal, but the communal atmosphere was not.

“Boy, that was right in the middle of [evangelists] Jerry Falwell and Pat Robertson and all of those,” Beatty says.

“Both my mother and father were educators – my father was a PhD in educational psychology from Johns Hopkins University – and this was not a morality that was imposed upon their children.

“I grew up with great respect and admiration and attraction to that which would later be named feminism. But that whole ridiculous sexual guilt was in the air.”

If you really wanted to point to a serious theme in Rules Don’t Apply, he goes on, it should be “the effect of this thing called American puritanism, that moral condition that existed particularly in 1950s America when it was brought to Hollywood”.

He is Frank, embarrassed after a clinch by the sudden stain on his pants. “You could say,” said Beatty in a conversation with the New York Times about the way he has weighted his story, “that maybe I’m more interested in myself than Howard Hughes”.

That was what they always said about Beatty, of course.

Two years ago, Carly Simon confirmed decades of rumour by saying that yes, at least one verse of her hit song You’re So Vain is indeed about Warren Beatty. “You said that we made such a pretty pair/and that you would never leave.” Well, that would be right.

Critics noted that his films also tended to be all about him.

“Well, yeah…,” he says uncertainly when I raise this. “Yeah, you could say that it’s somewhat axiomatic to say character is plot and then casting is character, so if you cast yourself it will be very important in the plot of that movie.”

He certainly looms large in Reds, the story of American communist activist John Reed (for which he won an Academy Award as best director in 1982); equally, he is the face of sex comedy Shampoo (1975, directed by Hal Ashby but written by Beatty), where he plays George, a none-too-bright celebrity hairdresser who has sex with most of his clients.

Annette Bening – who met Beatty on Bugsy and plays Marla’s manipulative mother in Rules Don’t Apply – remarks that all his films mix humour with a sense of melancholy, “whether he’s making a film about Hollywood or politics or social mores”.

Beatty’s Howard Hughes is certainly a sad man, marooned in his own madness;  so is the turncoat Democratic senator contemplating suicide in Bulworth (1998), the last film he wrote and directed before Rules Don’t Apply.

Beatty is a lifelong Left liberal but, according to a recent profile in Vanity Fair, he twice refused to play disgraced right-wing president Richard Nixon – once for Oliver Stone and again in Ron Howard’s Frost/Nixon — because he felt that in both films, “Nixon was not treated compassionately  … I think I was on his enemies list, but I grew to feel sad for him”.

This was especially generous given that Beatty had campaigned against Nixon for Democrat candidate George McGovern in 1972; in 1984 and 1988 he worked on Senator Gary Hart’s campaigns to win the Democratic nomination.

Plenty of people tried to persuade him to enter politics himself – “Ah, if only Warren Beatty had been President,” Norman Mailer once told The Paris Review – even as late as the ’90s.

Today, however, he can’t be drawn on anything to do with politics. It is odd and kind of maddening: at a time when every interviewee wants to talk about the state of the world, one of the most famous living Democrats is keeping strictly to the topic at hand.

Hughes was not a political figure, he says. But surely anyone with millions of dollars in defence contracts is a political player?

Huge amounts of money swirl through Hollywood too, of course. “But this is not a political movie about Hollywood,” says Beatty. “You know about my political life, right? I want to be careful that I don’t talk to you about the politics underlying the movie because – ah – it’s not filled with the politics of Reds or Shampoo or Bulworth. This is a light romantic comedy.”