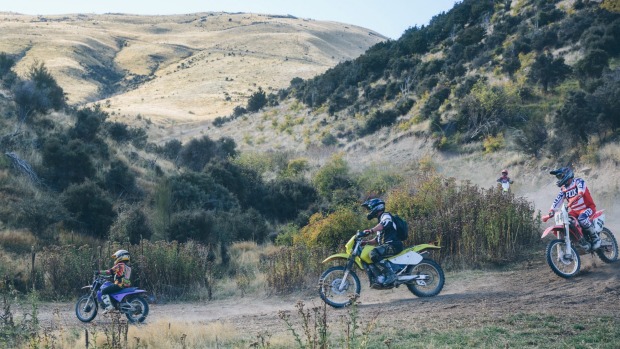 Some schools sell chocolate, others toothbrushes. In Wanaka, supporters hit the trails on their dirt bikes.

Wanaka’s third annual trail ride at Tarras attracted a record number of 859 registrations from around the South Island, up from 600 last year.

Last year the fundraiser for Wanaka Primary School and Montessori Children’s House Wanaka raised $28,000 and it is hoped to top that amount this year.

Bikers of all ages and sizes enjoyed more than 100km of trails on Deep Creek, Long Gully and Lindis Peaks stations.

Landowner Lucy Annan was thrilled with the atmosphere.

“Its great to have so many people here and exploring this unique area that they wouldn’t normally get to see. There’s an incredibly diverse group of people here and I love getting an insight to the culture of trail bike riders,” Annan said.

This year the trail ride offered more advanced and expert trails, as well as continuing the “peewee” course for beginner riders.

Riders had a range of skill levels, from novices through to hard-core riders.

Even the most skilled riders were challenged, with the extensive trail network extending almost to the Lindis Pass.

Money raised from the ride would be split between the two schools.

Wanaka Montessori board of trustees representative Duncan Stewart said it was important to have tangible outcomes from fundraising.

“When the Wanaka Trail Ride started we set a goal of 300 registrations. Now in the third year we’ve hit 850! Thank you to all the riders for their support, we hope you’ve had a great time, he said.

More than 100 volunteers supported the ride and they too had an amazing experience, volunteer manager Gillian White said.

“No major incidents occurred and we owe a lot to the dedicated track and safety managers who truly make this event happen, she said.

The event was supported by local sponsors, many of whom participated.