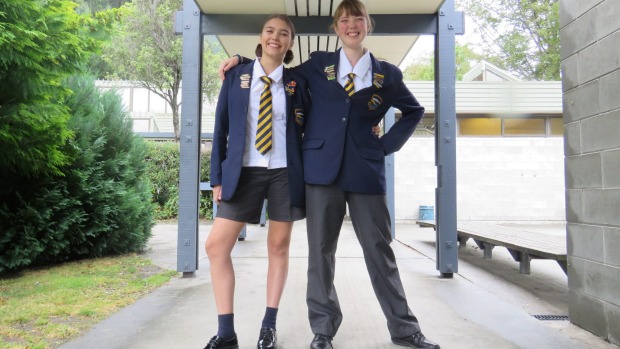 Wakatipu High School students have embraced gender equality with a growing number of girls choosing to wear shorts and trousers to school.

The school is the only high school in the Queenstown Lakes and Central Otago Districts which has a policy permitting females to wear the outfits traditionally reserved for male students.

Principal Steve Hall said the policy was included when a full review of the school uniform was conducted four years ago as it was known some students would want to have the option “and we were happy to support that”.

“We want our uniform to be worn well. We are also trying to be inclusive and fair.”

There was no similar policy allowing male students to wear skirts or kilts as it had never arisen.

“I guess we let the girls wear shorts and trousers so we’d have to consider it.”

Year 12 students Lexi Rosemoore, 15, and Leah Kissick, 16, are among the pioneering female students to wear shorts and trousers.

﻿They liked the fact the clothes were comfortable and easy to wear, particularly for active sessions at drama and getting changed for physical education.

It was not easy at first as the policy was new to the school when they started and only one other female student was wearing shorts and trousers.

“Some people think we are trying to be alternative and different but it’s not a call for attention.”

It was not for warmth either with woollen stockings and a winter kilt providing much better heat in winter than the trousers.

Leah said people didn’t comment as much now and it was good to see an increasing number of young students choosing to wear shorts and trousers also.

“I’ve found my voice and stance. It’s part of my identity.”

Other high schools in the region said that even though they had gender-specific uniforms, they would consider allowing students to wear different uniforms if it arose.

Dunstan High School principal Reece Goldsmith said he was aware of a case in the past where a parent approached the school and an exception was made to allow a student to wear a different uniform.

At Mt Aspiring College, in Wanaka, girls wear culottes in summer and a kilt in winter, while boys have options of short or trousers.

Principal Wayne Bosley said the gender specific nature of the uniform had been under discussion in recent weeks and would be included in a full uniform review recently announced by the school board.

The review was prompted by a view that it was time to revisit the uniform, which remained generally the same as when the school was established in 1986.

A review is also forthcoming at Maniototo Area School where acting principal Mike Corkery says there are too many options available at the school, which has pupils aged from five to 18.

“It’s not very likely that any of the boys would wear skirts in the Maniototo,” he said.

Boys have shorts and long trouser options. Junior school girls can wear skorts, shirts and trouser but older girls only have the option of kilts and tights in winter.

There had been complaints from senior girls that the kilt was more expensive than boys long pants but no specific requests to wear a different uniform.

“It would be interesting if we did. I don’t think we’d have an issue with it.”

The move toward gender neutral uniforms was an “interesting trend”, he said.

“I can see us probably giving a couple of choices rather than ‘this is for boys and this is for girls’.”

Previous student generated concerns included a dislike of “itchy” jerseys and that uniforms were not very stylish, he said.

Cromwell College principal Mason Stretch was unavailable for comment. The school’s website lists skirts for girls and shorts and trousers for boys.