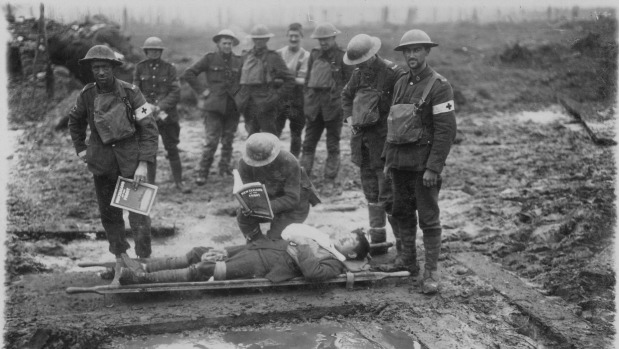 Tourism and warfare usually make uncomfortable bedfellows, but in the Waikato Museum they compliment each other well.

A series of exhibitions featuring tourism-oriented poster art from last century, traumatic footage from the battlefields of the First World War, and paintings depicting the activities of the New Zealand Mounted Rifles during that conflict have gone on display.

In the years before television and colour photography, poster art was the most popular advertising mechanism and Selling the Dream features many tourism posters that helped promote New Zealand – both locally and to the world – from the 1920s to the 1960s.

The exhibition features more than 50 lithographs and silk-screen prints produced by some of New Zealand’s leading commercial artists.

Sourced from private collections, the posters promote the glamour of travel and New Zealand’s tourism attractions of the day. Many feature locations such as the geothermal field of Whakarewerewa, in Rotorua, the Chateau Tongariro, and Mt Maunganui.

Selling the Dream also features a series of short interviews and a 15-minute documentary titled Graphic Wonderland, which explores the art, skills and techniques of commercial artists during this period.

Graphic Wonderland also goes behind the scenes of the industry with footage illustrating the work of commercial studios, including the National Publicity Studios and Railways Studios.

It is complemented by the coffee table book of the same name, which was a New Zealand Post Book Awards finalist in 2012.

In an adjoining gallery is The Belgians Have Not Forgotten, an exhibition created by the Memorial Museum Passchendaele with funding and support from the Federal Government of Belgium, which is touring Australian and New Zealand venues in 2017.

Its purpose is to show New Zealanders and Australians, many of whom had relatives who fought in Flanders Fields a century ago, that Belgians were also deeply affected by the events of the First World War.

Photographs, movies, artwork and artefacts from the battlefields illustrate the war experience while highlighting the commemorative events and memories of war, which live on in Belgium.

Meanwhile Upper Hutt artist Rebecca Holden, whose grandfather John (Jack) Culleton served with the Waikato Mounted Rifles in that war, was inspired by his experiences to create Sand in the Apricot Jam. It is a series of paintings that depict the activities and trauma experienced by the regiment in the Middle East campaign, as well as their contribution at Gallipoli.

Culleton was wounded at Gallipoli, however his injuries were not grave and he returned to serve with the regiment in the Sinai and Palestine until the end of the war.

“The title for this body of work comes from my Grandpa’s distaste for apricot jam,” Holden said. “He explained to my mum one day that he hated apricot jam because it reminded him of the rations from the war.”

Sand in the Apricot Jam is being shown until June 11. The Belgians Have Not Forgotten can be seen until May 28, while Selling the Dream runs until July 16.