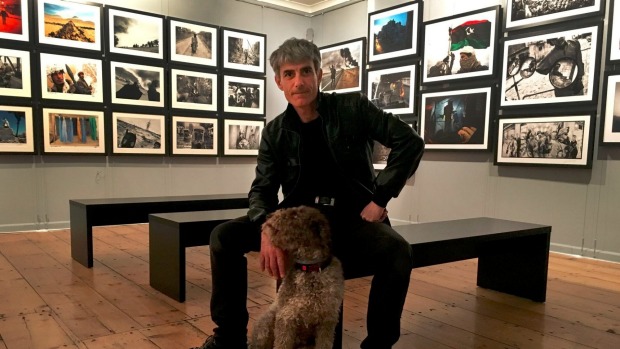 Bullets whizzing past Wade Goddard’s head could have ended the young Kiwi’s war photography career before it began.

The wide-eyed 22-year-old from Eketahuna with no reporting background had bought cameras and driven across Europe to record the Yugoslav Wars, where a series of ethnically-based conflicts would cost tens of thousands of lives.

Goddard’s quest, to try to comprehend: “What leads a people to destroy another and themselves in the process?”

He would emerge from the carnage a decade later a renowned photojournalist whose images of horror, heartbreak and defiant heroism featured in newspapers and magazines around the world.

“I came across [the aftermath of] massacres where villages had been overrun. Mental institutions that were abandoned and the inhabitants wandering around naked, starving. Dead children with their eyes open. War, in general, is just a big atrocity,” says Goddard from his home in the Croatian city of Dubrovnik.

The now 47-year-old – who covered the conflicts as a freelance photographer for Reuters, The New York Times and Newsweek –  shares that home with wife Nina, a survivor of the deadly Siege of Sarajevo, and their baby daughter Rea.

Dubrovnik is also the site of his acclaimed War Photo Limited gallery, displaying the work of leading photojournalists from recent and current battle zones. Its aim to expose the harsh reality of war to those lucky enough to have avoided it.

“I’m not taking the pictures, but I’m still pumping the story,” says Goddard, who set up the distinctive exhibition centre with a friend in 2003.

Those stories presented in the images are raw enough to put viewers through a range of emotions. “It’s quite common that people ask for tissues at the reception desk because they’re crying.”

Goddard’s own tale had its beginnings as a New Zealand teen with an interest in photography and a keen sense of social justice.

“I saw a documentary about a cameraman working in North Africa, covering a conflict. I was intrigued by this guy putting himself in the middle of the desert. He was in a convoy of jeeps and they got strafed by an enemy aeroplane. After that, I started to have more of an interest in world events and coverage of conflicts.”

Leaving Tararua College, he completed a lineman apprenticeship. “I had a massive income for my age, an excellent job, a company house, car and a motorcycle – I was living the dream!”

He also had an incurable case of wanderlust and headed to London. Passing a newsagent’s there he noticed a photography magazine with a cover picture of a war scene. The feature was on Vukovar, the Croatian city devastated in an 87-day siege in 1991 in what was said to be at the time the fiercest and most protracted battle in Europe since World War 2.

Goddard was moved by the article, and when the Bosnian War broke out in April ’92 he felt compelled to travel there to try to comprehend the lethal conflict.

He bought some cameras and drove from London to the besieged city of Mostar in Bosnia and Herzegovina, connecting with other photographers along the way.

“Mostar was completely surrounded, except for one goat-track down a mountain. We had to wait until it was dark enough that anti-aircraft gunners couldn’t see us coming down the hill, but not too dark that we would fall off the goat track in our vehicles.”

Defenders escorted them around to Stari Most, the world-famous 16th century bridge that connected the two halves of the city and where one day an exhibition of his work would become an historic reminder of a bitter division. They were unable to reach the bridge because of heavy small arms fire, Goddard says.

It was his first taste of war. “I had no journalism experience and no idea what I was doing.” But he doggedly remained to practice his new calling.

Leaving with a subsequent media group after deciding “if I don’t go out with these guys, maybe I end up getting buried here”, he made his way to Croatian capital Zagreb and teamed up with a photographer who became a close friend.

“We bought cars, rented cars, borrowed cars, and drove around central Bosnia covering the conflict all through ’92, ’93, ’94, and ’95. He was able to get us through checkpoints they wouldn’t let foreigners through, which happened a lot. I’d sit in the car, saying nothing.”

In May ’93 Goddard was back in Mostar, this time covering a battle between former allies. Fighting was so fierce at one point, he says, it took four hours to cross one street.

One series of images he captured shows explicitly how survival can be a matter of chance in war. In it, a United Nations peacekeeper creeps forward to rescue two women lying in the street after being shot by snipers. The first suffered a head wound which would prove fatal, the second wearing a bulletproof vest was shot in the back trying to pull her to safety. The force of the bullet against her vest pushed her into the gutter out of the snipers line of fire and she was later able to escape.

“You can just be unlucky,” Goddard says. “And then you can be really lucky, like I was most of the time.”

Like when he decided to sleep in the basement of his Mostar hotel during a night of intense fighting. “In the morning I went upstairs to get changed and a tank shell had gone through my room, blew everything to pieces.”

He cheated death “lots of times”. “Snipers missed my head by centimetres several times – you could hear bullets whizzing past your ears. Grenades went off in a place where I was a minute ago.

“I was going through a front-line town and they chased me with 60mm mortars. They were going off left and right as I was driving. I knew they were after me, and I wasn’t even in an armoured car. Their third attempt, the mortar hit the top of the building as I was going around the back side of it. If the building wasn’t in the way…”

Goddard says among the most harrowing scenes he witnessed during  the 1991-2001 Yugoslav Wars was that of a group of women and children refugees at a UN-controlled airbase at the city of Tuzla in 1995.

They had been moved out of Srebrenica, about 100km away, where they had to leave menfolk behind. As many as around 8000 men and boys were later estimated to have been killed in what has become known as the Srebrenica massacre.

Goddard says he was one of the first photographers to arrive at Tuzla.

“There were thousands of people sleeping under blankets in the fields, and as they woke up they started crying. There were little groups of families everywhere crying.” Their tears, he says, ones of dread they would never see a father, a son, a brother again – that they would not survive the ordeal or were already dead. “That was probably one of the hardest things I ever came across during the war, the extent and the amount of grief in one small place.”

He also observed stoic defiance by women caught in the cruel and bloody conflicts.

“Like in the Siege of Sarajevo (1992-95). If you want to go to the market and buy something, you’re going to have to run across big open avenues that are exposed to sniper fire. But rather than wearing their fastest trainers, women are dressed in their high heels with their make-up on like they’ve just walked out of a tube station in London. And they’re tearing across these avenues in their high heels because they want to live their daily lives as normal as they possibly can, and that was their war against the war.”

Goddard says seeing the suffering around him became even more emotionally demanding after the birth of daughter Perina in 1999, from his first marriage to a Zagreb local three years earlier. Witnessing the agony of parents at their children’s suffering or loss became even more personal to the new father.

When the wars ended Goddard stayed on in Croatia. “Then a friend bought this wonderful space in Dubrovnik and suggested that together we build a museum of war photography and since 2003 I’ve been doing this. Which is fantastic because it’s a way of retiring from the field without actually retiring from the world.”

War Photo Limited has been ranked in the top 10 attractions in Dubrovnik and the top museum in Croatia by TripAdvisor. One recent reviewer gave it a five-star rating, noting the “harrowing and thought provoking photography” on display.

Goddard, last in New Zealand for a holiday in 1996, wants to one day show his young family his homeland.

Nina was born in Sarajevo, where she had to brave sniper fire when a bus rescuing children from the siege was turned back at the frontline, he says.

“She with her 10-year-old legs, carrying her big red sports bag, back home across the Vrbanja bridge crossing the river in the centre of Sarajevo, completely exposed to sniper-fire. Her parents didn’t even know that the bus had been turned around. She was really lucky [to make it].”

Goddard says his war photography career was fuelled by a need to understand: “What do you have to do to a population to make it pick up guns and shoot their old schoolmates?”

Fear mongering and demonising people with different beliefs or backgrounds were two prime ingredients in a deadly mix, he says – something people should be constantly vigilant against.

Those caught up in conflicts, however, can be among the first to forgive and the least likely to wage war again once a peace is achieved, he says.

“People who have experienced war first-hand, the ones right in the face of it, they’re almost the first ones to forgive their neighbours. If you’ve gone through war, you’re the last one to want to go back there. Because you know what it means and the loss it creates.”