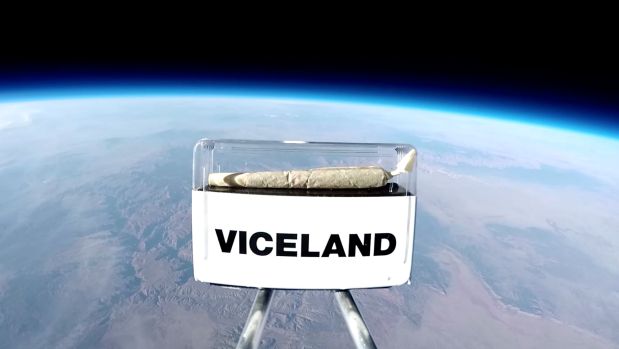 The youth media network launched a high-altitude weather balloon into “space” carrying marijuana to launch it’s Weed Week – a week of programming about the drug and its many uses.

The launch, shared on Facebook, professed to show the spliff going into space. The balloon really only reached 34.2 kilometres above the ground, however, almost 70km below what is considered outer space.

Almost two-and-a-half hours of the flight was broadcast across Vice’s many social media channels. The network is a vocal campaigner for the legalisation of marijuana.

Despite Vice saying on its main Facebook page that the flight was live, a Viceland spokeswoman confirmed the video was pre-recorded.

“Progress was monitored and recorded by an on-board camera and black box picking up key data. Findings following the flight revealed that no spliff has reached such heights, nor descended back to Earth as quickly,” she said.

The rolled marijuana departed from the Nevada Desert, US. Recreational marijuana was legalised in Nevada in 2016.

It landed 150km from its launch site and fell back to earth at 321kmh.