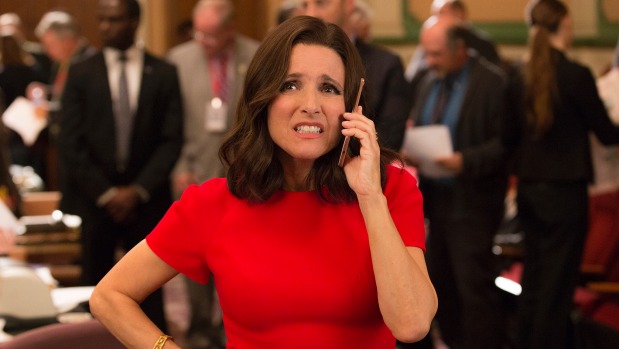 “Immediately after the election, there was a moment for all of us, a 24-hour period, where we were asking ourselves, ‘Wait, who are we now?’ Of wondering, can we be funny any more? Is this appropriate? What do we do now? We had a bit of an identity crisis … and then we got our **** together and carried on.”

Julia Louis-Dreyfus, 56, the multi-award-winning actress and star of Veep, is describing the difficulties of making the sixth season of the SoHo comedy against the backdrop of the real-life 2016 US presidential race, and the shock election of Donald Trump.

But she could just as easily be detailing the on-screen challenges faced by her foul-mouthed alter ego, Selina Meyers. Having spent two seasons as President, albeit unelected, after a scandal forced the previous leader to resign, she spent season five lobbying for support within the party to win a rare electoral tie-break.

Things, however – as any devotee of the show could have predicted – did not go her way and without office, portfolio or title, an unemployed Selina is facing an identity crisis.

READ MORE: *Why you should be watching Veep ​*Veep’s Julia Louis-Dreyfus ‘dumbstruck’ over Australian Government’s use of her slogan *Game of Thrones, Veep and Olive Kitteridge dominate the Emmys *Julia Louis-Dreyfus: The unlikely thinking women’s role model

I meet the cast in Austin, Texas, ahead of the US season premiere.

“Who is she now? And how does she stay relevant?” ponders Tony Hale, who plays the former President’s slavishly devoted ‘bag man’ Gary.

“She’s out of the limelight and so much of her identity has been bound up with being in the limelight, so that’s terrifying for her.”

Selina is not taking her new, powerless position lying down, however, and is manoeuvring herself into diplomatic roles overseas (despite having no diplomacy at all).

“She’s taking on a traditionally post-presidential role, and really trying to stay vital and relevant, and taking it as seriously as her ego dictates,” says Louis-Dreyfus. “She does a lot internationally.”

“There’s a great tradition in this country: when things aren’t working for you domestically, go overseas,” adds David Mandel, the show’s writer and executive producer, who replaced Veep’s initial creator, Armando Iannucci when he departed after season four. “When in doubt, walk through a minefield.”

Meanwhile, on the domestic front, without the support of the White House staff, Selina is being forced to deal with the everyday realities of civilian life, such as having an up-to-date driving licence and needing to buy stamps.

Does she believe that many Presidents become cut off from ordinary life?

“I heard a story about one of the Bushes – it must have been George W – that when he left office, the barcode self-scanner was in place in some shops. He had no idea how to work it at all because he hadn’t been into a store since they were brought in.”

The loss of Selina’s role at the top of the political tree has a huge impact, of course, on the team around her too, who scatter like ants.

Amy, her former Chief of Staff and campaign manager, is in perhaps the most surprising place of all: Nevada. Having relocated there for the recount, Amy began a relationship with Buddy Calhoun, the Nevada Secretary of State.

“Amy is in love and looking forward to having the real life that maybe she always saw in Big Red chewing gum commercials,” says Anna Chlumsky, who plays the highly strung staffer.

Her former sparring partner and former flame, Dan, has decided to leave the world of politics and has moved into broadcast journalism, anchoring a morning show on CBS.

“He thinks he’s making this big left turn to a whole new industry that he’s so much better suited for, and he’s not quite prepared for how similar all the back-stabbing and competitiveness is,” says Reid Scott, who plays the ultra-ambitious Dan. “He is also now up against so many similar people.”

Selena, meanwhile, is trying to work her way back into politics.

“She cannot live without politics, and will never be able to,” says Louis-Dreyfus. “It’s in her DNA.”