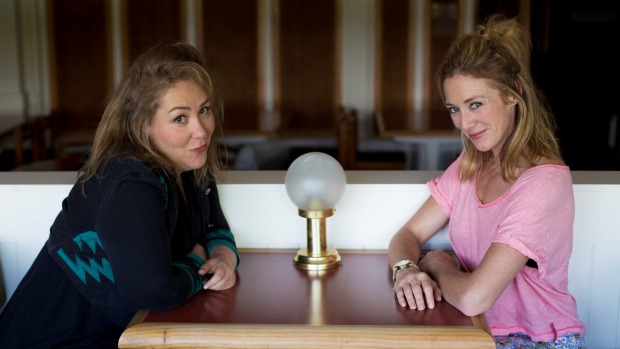 AMELIA/ I was living in Auckland five or six years ago. There was a creative evening called “Stranger Things”, it’s sort of an artists’ collective that a couple of friends of ours were running. The whole point of the evening was pairing up with strangers. I got paired up with Emma. It was a hilarious kind of, blind date situation on our first meeting. We had two weeks to come up with a 10-minute piece of entertainment to be performed. Comedy has always been a huge passion of mine and Emma’s. For some reason, we played dogs.

The show at the Comedy Festival is our second offering. We’ve probably performed it around 300 times. It’s an anthropomorphisation of canine characters. The first show was about farm dogs, predominantly. This show is about two farm dogs who go to the city, where they meet city dogs.

We don’t really sit down and “write” in the traditional sense – we do a lot of role-playing and improvisation. I’ve got a child now so there’s time constraints, but we tend to split our time – I’ll go up to Auckland or Emma will come down here. On the road, we can tweak and change as we go.

I tend to take the kind of erratic, more pepped-up characters, and Emma has these strong characters with gravitas. The one thing I’ve really learnt from her is how you can draw out a gag. She has no shame or fear when it comes to getting gross on stage.

In the first show, Emma played drooling dog. The audience in the front row couldn’t actually look- they’d be hiding behind their hands – because there was this enormous amount of saliva coming out of her mouth. I would end up having to stand in it. Often Emma I feel is a little bit naughtier than me – I’m the prude. She’s really not that gross in real life.

We’ve toured around rural communities for the last four years, I just find she has the same effect on everyone – they just instantly warm to her. With rural shows, every space is different. You might turn up and there’ll be people shearing because they don’t know you’re performing that night. Rather than going backstage and letting someone else do the ticketing, we have to do it all. So Emma and I are normally up front and get to meet our audience. Quite often they don’t realise we’re the actors.

She was born and raised in the city but she can fit in anywhere. She’s in love with every little town we go through. She’ll see a wee falling down house and go, “Oh my God, look! It’s Tony’s Tyre Service, CUTE! Oh my God – it’s a wool shed, it’s a barn, it’s a garage – GREAT!” She really loved Oamaru when we first went down there. Gore – loved it. It’s turned into a joke, like, Oh my God. Emma. It’s just a supermarket.

EMMA/ We’d signed up to this evening called “Stranger Things” which Lara Fischel-Chisholm and her brother used to run. I met Amelia at Lara’s house and we swapped phone numbers. I remember Amelia was very stylish – she always wears lots of colour and I am almost certain she was wearing a hat.

We spent these quite intense first few sessions together to make this thing – it was like falling in friend love. We would end up talking about life and death and our values and go off on these huge tangents.

What led to The Bitches’ Box was a role playing situation where we were two women locked in the boot of a car. We’d already agreed we were quite into talking animals and then she told me what a “bitch box’ was. I was like, that’s a great idea.

In the skit, we were dressed up kind of as prostitutes talking candidly about wanting to sort of, f… every man in the district. The punchline was we were dogs. People really responded to it and loved it. I grew up with one dog; Amelia grew up with like, whole packs.

I had been living overseas for about 10 years and I had my flight booked back to London. But I had never been to the South Island. I was like, before I go back, it would be cool to see some of the country. Amelia had always had a real passion for bringing things to the country. She gets annoyed so much happened in the city and the country kind of gets forgotten about. We thought, maybe we should tour a full-length show around wool sheds.

Last year, we wrote the sequel, Sons Of A Bitch. It was a much bigger tour, and Amelia did it whilst being a new mum. There were long periods of time when we’re on the road, which is hard and exhausting enough as it is, but then to also be away from your little baby… She did an incredibly brilliant job. I’ve got such a lot of admiration for her, for that.

Some of my favourite moments with Amelia is when we’re warming up getting ready for the show. We’re doing it anywhere from inside the Toyota Hilux to the disabled toilets, people’s living rooms, sheep pens. We’ll be in the truck when the interval happens after Mel’s played, and all these men will come out and line up against the fence to take a p… They don’t know we’re in the truck. We always get great delight from that. Or they come and actually p… on the truck and we’re like, “Oh God, we’re in here!”

We took the show to Edinburgh and we stayed with her family’s friends, who own a castle. There were pictures of the Queen, his first cousin, in the bathroom, on a family picnic. We got very drunk one night and were running round their ballroom jumping round trying to play the bagpipes.

Sons Of A Bitch will be performed in Auckland at Herald Theatre from May 9-13 and in Wellington at BATS theatre, from May 16-20.