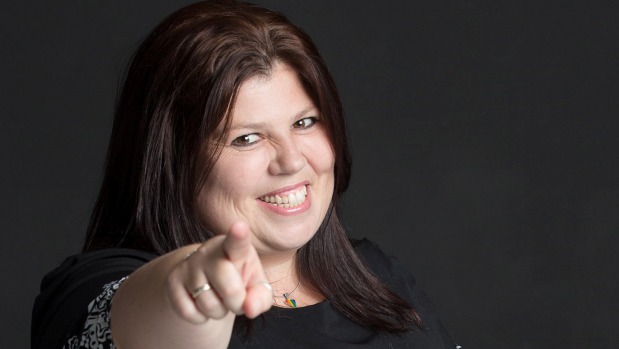 If the cliche of performing to two men and a dog sounds bad, how much worse would it be if the dog didn’t show?

“Yeah,” says Urzila Carlson, “I looked from backstage and there were just these two guys in the audience…I couldn’t give tickets away for that one and they were shocked I still went on. But I’ve always said as long as there are more people in the audience than there is of me, then I’ll go on.”

That was Melbourne, five years ago, and if there’s a saving grace it’s that the Forum Theatre only seats 20. And then those two guys told their friends what they’d seen so that by week two every seat had a bum on it.

As we speak, she’s back in Melbourne for the city’s comedy festival, and my, how things have changed: “I met those two guys again, they’re working for the festival now, and we were laughing about that show because I’ve just sold out four nights in a 400-500 seat room in the town hall…”

Not that she’s big noting, that isn’t Carlson’s style, not when the champion self-deprecator can find some way to put herself down. Instead there’s satisfaction in her voice; as a fair dinkum, Bok-accented, Kiwi battler she understands that starting a-new is difficult. She’s had plenty of practice at it too, since immigrating to New Zealand from South Africa in 2006 her life has been a series of new starts – a new job, new relationship, marriage, first child, then second child (one of each) and, of course, the career that was kicked off by a dare and which few in her family even recognised as a job.

If there’s a constant, it’s her approach to each: “The harder you work the better you get,” she says.

With that logic in mind, if you’re attending the debut of Carlson’s brand new show, Studies Have Shown, which kicks off in Wellington next week, you can expect a that-much- better show than what the Aussies got. She’s also been chosen to host the Comedy Gala, the traditional opening showcase of the festival’s biggest names, which plays Wellington and Christchurch this week after opening in Auckland.

All the same, you might keep your fingers crossed that the punch-lines match the build-up as right now she has three entirely different shows whirling around her head. After she’s done treating Australia to Unaccessible, she switches straight into her new gags while at the same time working on a new show for her latest new start, this time at the renowned Edinburgh Fringe Festival. “Ah, it’ll be fine. I’m a woman so I’ll be multi-tasking the shit out of this stuff.”

It helps that she reckons comedy has calmed her down. Which is hard to believe given she still gets anxious about performing, hence her early arrival to every show.

“I need some quiet time, so I arrive an hour before I go on, sit on my own, have a cup of coffee and some water, and chill. I get stage fright so I need some breathing space with no people, talking, noise and stuff like that.” It’s also why Carlson has taken to golf. As she says, where else can she be outside, away from people and doing something that kills so much time?

Yet: “There are still days when I’m standing next to the stage wondering what the hell I’m doing there and why I put myself through it, but once I’m on and get that first laugh…I’ve tried, but I can’t explain what that feels like. It’s a rush. So despite everything, I still say comedy is the best thing that’s ever happened to me.”

Well, that and her enabler-slash- wife, Julie (Carlson likes to keep her private life private, so don’t go expecting a surname).

The decision to turn life stories into comedy gold in 2008 was a mutual leap of faith and the pair hunkered down and reduced every expense they could (new babies excepted) as Carlson set about barging her way to the head of the New Zealand comedy queue. It didn’t take long, from being named best newcomer in her first year she’s gone on to rack up multiple people’s choice and best female comedian awards.

If there’s been any luck along the way it’s that she come along at a time when female comedians are on the rise. She calls it a revolution. “For so long the industry was dominated by white men. That’s changing with more women becoming strong voices in comedy. I think people will look back some day and say this is when the revolution started…the tide is changing and not everyone has a life jacket…I have to say it’s been hard though and honestly, it’s only been in the last couple of years that I’ve stopped panicking if I have a day off, that I’m in my 40s and won’t work again.

“Now I’m thinking it’ll be OK, this is a career now, I don’t need to keep a fallback plan in my head, like going back to the office (she was a graphic designer) or bartending. If I have to I can do stuff like voice work, you know, different avenues in the same world. Which makes sense to everyone but my poor father-in- law, when he heard our family income was going to come from stand-up…I think he’s still waiting for me to get a proper job.”

Her work ethic is why after only one year of stand up she headed to Australia and replicated everything she does here: festivals, solo shows and television work. Her theory is that by dividing her time equally it’ll take twice as long for people to get sick of her.

So yes, Carlson is quite literally working for her laughs and takes it very seriously indeed. “There’s a responsibility in what I’m doing, definitely, and not just toward my family. When you go on stage you don’t know who’s out there, there could be a couple who haven’t been out in six years and they’ve chosen to spend their hard-earned on seeing me. My job is to make them laugh and give them a good night out. If I f… that up then I’ve failed at my job. When you ask a barista for coffee, you don’t want tea, so if there’s a comedy emergency, I’m the person who has to rescue the situation.”