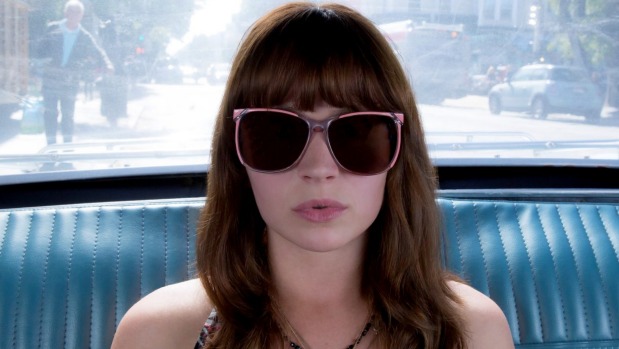 “You’re young, smart, pretty.  What’s the problem?” asks Sophia’s dad in Girlboss (available on Netflix from April 21).  It’s a question I’d already been asking myself, swiftly followed by “why am I watching this?”.

This Netflix original is a “loose retelling of real events” about the rise of Sophia Amoruso and her online fashion brand Nasty Gal.  Amoruso had humble business beginnings starting out selling vintage clothing on EBay.

It sounds like a thoroughly millennial tale with enough substance on paper, and, indeed, this “retelling” was apparently inspired by Amoruso’s biography. But the first episode felt more like it was inspired by a mediocre, paint-by-numbers rom-com.

READ MORE:  * Review: Tomorrowland * Why you should be watching Veep

Here’s our kooky heroine in the opening scene running out of gas and having to push her car uphill on a picturesque San Francisco street.  Ah, she’s clearly a bit disorganised and has money troubles.  Then, here’s our heroine having fun in a busy city bar with her best friend and spotting a hot guy playing in the band.  Ah, a bit of a love interest.  Finally here’s our heroine going to work at her job in a shoe store that doesn’t really do it for her.  Ah, she’s got too much get up and go to work in a boring old shoe store.

With lots of good-looking people and locations, it gives a light, fluffy portrayal of a 20-something struggling to find her place in the world. But I use the word “struggling” in the broadest sense, because, well, sure, Sophia has a boring job and dumpster dives for food.  But, this seems to be through choice, rather than necessity.  She has friends, an apartment and a father who seems nice and concerned about her and takes her to dinner in expensive restaurants.   And yes, her job is kind of dull, but she turns up late, takes personal calls and surfs the net all day.

Personally my sympathies lay with her dad and her boss, because Sophia comes across as 23-going-on-13.  She’s all youthfully self-absorbed idealism and melodramatic angst.

Oh, look, perhaps I’m being unfair – we’ve all been youthful and annoying at some stage.  Hopefully, Sophia’s character will grow out of this and become more engaging than irritating as this series progresses.  Time will tell.  I’m just not sure I want to spend my time finding out, being entertained shouldn’t be that hard.

There’s another tale of a high-profile woman in the sixth series of Veep (Thursdays, 9pm, SoHo).  With ex-President Selina Meyer now out of public office, her team have also dispersed.  Slick Dan Egan is a host on CBS Morning; Mike is at home watching Bubble Guppies and Ben has scored some consultancy work for Uber, a “bunch of millennials, too lazy to learn how to drink drive”.

Meanwhile,  Selina herself is ruthlessly pursuing speaking engagements.  “Tell them I’ll stand on a glass podium and wear a short skirt”.

Yes, like Sophia in Girlboss, Selina is utterly self-absorbed, but there’s no youthfully idealistic counterbalance.  And Veep is the better for it.