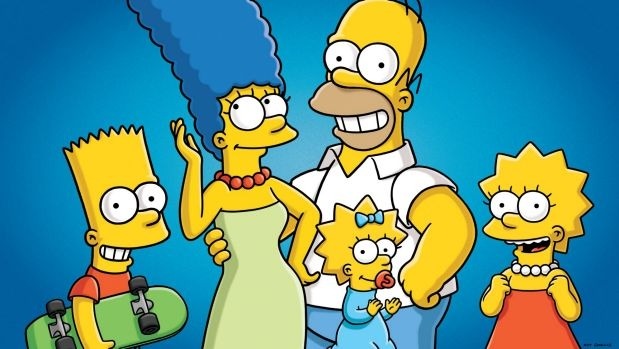 From a very humble beginning – a wry but charming look at an American family, which gently nodded to creator Matt Groening’s own: father Homer, mother Marge and sisters Lisa and Maggie – The Simpsons has become a global cultural touchstone.

For three decades it has enjoyed almost unbroken critical and commercial success, and permanently altered both the audience’s expectation from television animation and, on a more fundamental level, the structure of modern narrative.

At first glance, it is a classic television situation comedy: a bumbling father, a wise but put upon mother, and a couple of teenage kids navigating the minefield of generational change.

In the history of American television it has gone by many names, though Norman Lear’s All In The Family is the best example: dad Archie (Carroll O’Connor), his long-suffering wife Edith (Jean Stapleton), daughter Gloria (Sally Struthers) and her husband Mike (Rob Reiner).

Not a remake in the strictest sense, that series was based on the British comedy Till Death Us Do Part, which featured father Alf Garnett (Warren Mitchell), wife Else (Dandy Nichols), daughter Rita (Una Stubbs) and son-in-law Mike (Anthony Booth).

What all possessed, distilled to perfection in The Simpsons, was an almost Trojan horse-like capability of delivering searing social commentary, on the modern family, and the modern society in which it fights to survive, packaged as easy-to-digest light entertainment.

In the case of The Simpsons, its anti-establishment exterior – posterised perfectly by the rebellious Bart (Nancy Cartwright) shouting “Eat my shorts!” – was precisely the kind of next-generation-rebellion to easily rufffle everyone’s feathers.

In fact, Matt Groening’s series – born as an animated short on The Tracey Ullman Show thirty years ago but quickly developed into a half-hour comedy by Fox – was lambasted by critics in its early years for precisely those kinds of social transgressions.

A bumbling layabout dad? A son who regularly disrespected his teachers, Principal Skinner and Mrs Krabappel, and kept company, on occasion, with bullies like Nelson Muntz? What kinds of role models were those?

As it turns out, they were – and are – rather excellent role models.

What the critics always failed to see in The Simpsons was its very humanistic heart and the fact that, despite the challenges which beset them on a weekly basis, the family unit of the Simpsons themselves always remained intact.

The Simpson family solve their problems co-operatively. Homer, while an inept employee and sometimes bumbling entrepreneur, is a loving father and a doting husband.

And Marge, backgrounded as the great beauty of an otherwise plain family who could so easily have done better, is bound to her husband and children by an indestructible love.

Even America’s disapproving conservative establishment had little comeback to the fact that the Simpsons, when all is said and done, even attend church regularly, with their neighbours, the kinder, more devout Flanders family.

The greatest success of The Simpsons has been to shrewly weave illumination and knowledge with entertainment. Can you imagine? Learning something from a cartoon? It’s the end of days surely.

And yet The Simpsons exposed children glued to its Halloween episodes, for example, to the dark brilliance of poet Edgar Allen Poe. (And to ice that particular cake, Poe’s The Raven was narrated by James Earl Jones, no less.)

In scenes over the years Lisa Simpson (Yeardley Smith) is seen reading The Bell Jar by Sylvia Plath, The Rise and Fall of the Third Reich by William L Shirer, Man and Superman by George Bernard Shaw and Leaves of Grass by Walt Whitman. (Don’t fret, she also finds time for Harry Potter by JK Rowling.)

And the series is peppered with references to Gore Vidal, not least of which was an appearance along with Michael Chabon, Jonathan Franzen and Tom Wolfe in an episode which satirised the Bread Loaf Festival, an annual US writer’s summit.

The Simpsons also broke ground with what modern day storytellers now refer to as the expanded universe, a creative leitmotif which is exploited by every major film and  television franchise.

Though many historical narratives – from The Bible to Batman – come with vast supporting casts, The Simpsons was the rare television program which gave real dimension to its background players.

Though The Simpsons is counted among the greats of its genre – from the biting South Park to the pop culturally rich Family Guy – it remains that rare jewel which stands head and shoulders above. It is, after three decades, first among equals.

Not just for its comedy, or its sentimentality, but for its searing social commentary, on politics, the family, modern society, corporate america and even the complex and deeply affecting subject of war.

“Contrary to what you’ve just seen, war is neither glamorous nor fun, there are no winners, only losers,” Bart Simpson said at the conclusion of Bart the General, one of the earliest episodes ever written and even now, after three decades, one of its most powerful.

“There are no good wars, with the following exceptions: The American Revolution, World War II and the Star Wars Trilogy.”

That quote is much loved among The Simpsons fans, and yet it isn’t the strongest in the episode, culminating in a neighbourhood gang war in which Bart leads a fight against a group of bullies in an exchange of waterbombs.

In one scene, Bart castigates a young kid for losing his nerve, slapping him hard. “I won’t have cowards in my army,” Bart says, prompting Grandpa Simpson to slap Bart in turn, and offer him this magnificent piece of wisdom:

“You can push ’em out of a plane, you can march ’em off a cliff, you can send ’em off to die on some God-forsaken rock but for some reason … you can’t slap ’em.”