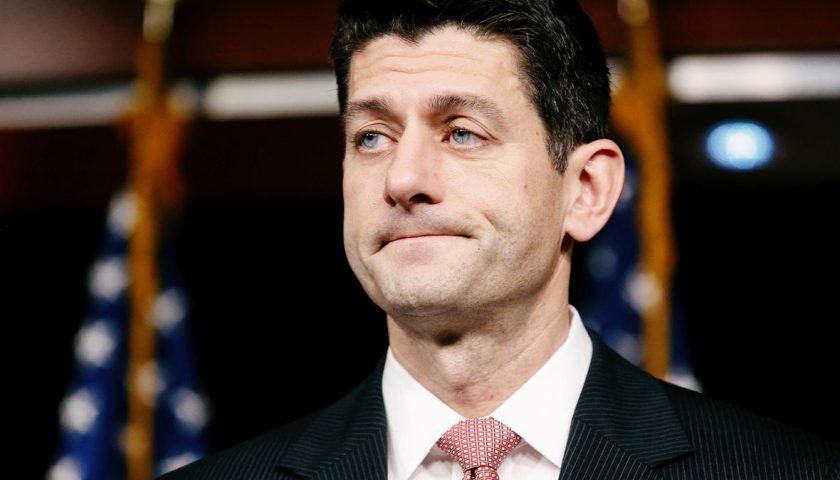 He’s threatening to blow up Obamacare to force Democrats to the table. That’s not how it will work.

It should concern all Republican members of Congress that during their two-week recess, they have left the Trump administration all alone in Washington to brood and to plot. As these legislators enjoy their “cooling-off” period and prepare to return to the tedious business of trying to resurrect a health care bill that was interred several weeks ago, and wouldn’t be going anywhere in the Senate, President Trump is succumbing to the illusion that he has leverage over Democrats. If you thought House Republicans were incoherent on the health care plan, the executive branch is raising the bar.

Ask different administration officials the very simple question of whether the White House wants lawmakers to move to tax reform before returning to try to finish health care, and you’ll get different answers. One Trump administration official—President Donald J. Trump himself—told the Wall Street Journal that the answer to this question was simply “no.” Shortly thereafter, Trump’s own budget director Mick Mulvaney said that the two items were “certainly moving on parallel tracks now from a policy perspective.”

Trump doesn’t seem able to decide whether he still wants to try passing a health care bill with Republican votes only or if he wants to work with Democrats. Part of the joy for him in the latter possibility is that it allows him to issue threats to a new batch of people while also not backing down from his previous threats to the Freedom Caucus. Issuing threats is the only part of life that Donald Trump seems to genuinely enjoy and the only aspect of politics he can get his head around. That doesn’t mean that he’s learned to do so effectively, however; congressional caucuses are not quite like North Jersey elevator vendors. And since his threats to House Republicans were largely greeted with laughs, he’s taken up an unlikelier target—congressional Democrats—to point an empty gun at.

Trump believes that if his administration stops making Affordable Care Act payments to insurers to lower out-of-pocket costs for lower-income Obamacare enrollees—known as cost-sharing reductions—many of the law’s exchanges will collapse, and Democrats will come running to him to make a deal. He is correct on the first count: As my colleague Jordan Weissmann has noted, the Department of Health and Human Services could do a lot of damage if it doesn’t make these billions in payments.

His thinking goes astray when he assumes that Democrats would shoulder the blame rather than the man who sits in the Oval Office and the party that controls Congress. A Kaiser Family Foundation poll released this week found that “61 percent of voters say that they will hold Trump and Congressional Republicans responsible for future problems associated with Obamacare.” In other words, the governing party would earn more of the blame for the individual health markets’ collapse if the governing party actively sabotages individual health markets. The Washington Post reported on Thursday, too, that congressional Democrats will make preservation of the cost-sharing reduction payments a top priority in the upcoming government funding battle. If Republicans don’t go along, Democrats could argue that Republicans shut down the government in order to sabotage health care markets.

Much to everyone’s chagrin, the administration has been giving mixed signals on how it will proceed on the cost-sharing reductions, which need to be defended in court against a lawsuit by congressional Republicans. The New York Times reported on Monday that the administration said “it is willing to continue paying subsidies to health insurance companies under the Affordable Care Act,” which would send “a small but potentially significant signal to insurers, encouraging them to stay in the market.” But it was unclear if that was really what the administration was saying, especially after Trump’s threat to Democrats.

When a Vox reporter checked in with HHS for clarification, it released this bizarre, spastic statement attributed to Alleigh Marré, a veteran Republican political flack who’s now a spokesperson for the department:

The New York Times report is inaccurate. The administration is currently deciding its position on this matter. We have not been contacted by Democrats to help save Obamacare, perhaps because they consider Obamacare to be a losing cause. Democrats need to help solve this failed Obamacare plan. The report was in reference to the current status of the lawsuit and is not an indication of what will happen in the future. No decisions have been made about how the administration will proceed.

Even for the Trump administration, those two jarringly partisan sentences about how Democrats suck seemed wholly out of place for an official statement from a federal department. They seemed out of place even within the context of the rest of the statement, as if some political crank had snuck in a couple of lines at the last minute.

As Politico reported Wednesday night, that’s exactly what happened, and the political crank was none other than our 45th and current president. “Two administration officials said the HHS rebuttal was personally ordered by an incensed Trump, who feared that the Times story hurt his negotiating position,” Politico writes. “Trump took the unusual step of calling HHS Secretary Tom Price to dictate a blistering statement that challenged the story and swiped at Democrats, one senior administration official said.”

The White House’s health care plotting almost makes one long for a return to the drama-free competence of the House Republican Conference. Oregon Rep. Greg Walden, an author of the American Health Care Act and chairman of the Energy and Commerce Committee, floated this week the possibility of giving up on health care for now and trying again in a later budget year. He might want to fly back to Washington early to relay that message to the president before the strange voices in Trump’s head lead him to a catastrophic decision for both the country and his own party.