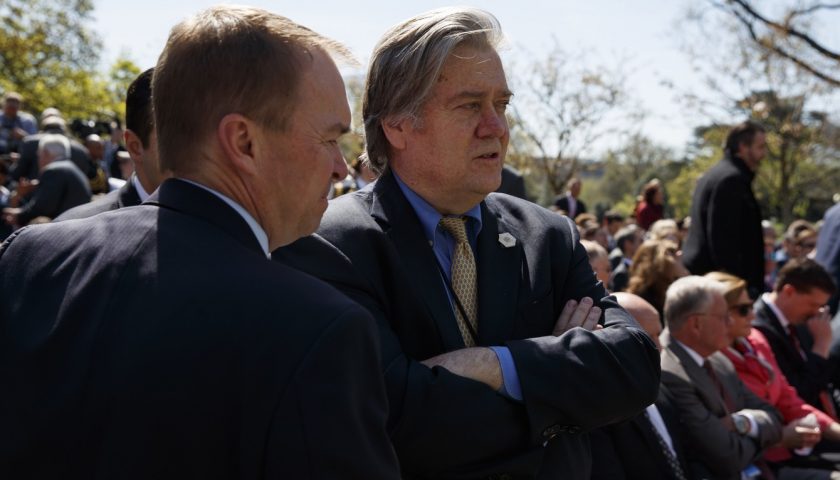 DONALD TRUMP HAS moved to end infighting that has pitted his son-in-law against his chief strategist in an internecine battle over the soul of the White House.

For the briefest of moments yesterday morning, members of his staff looked like they were having fun when smiles and backslapping briefly replaced the tension, chaos and exhaustion of 80 days in Trump’s pressure-cooker White House.

“I’ve always heard that the most important thing that a president of the United States does is appoint people,” Trump said of the major political victory of getting Neil Gorsuch on the bench.

“Hopefully great people like this appointment to the United States Supreme Court.”

But during that time, life inside Trump’s administration has been far from idyllic.

Tears and anger greet each new staff reshuffle, such as the recent rapid departure of deputy chief of staff Katie Walsh.

And then there’s the infighting.

During last year’s campaign, differences between Trump supporters — Republican moderates and hardliners, globalists and nationalists — were papered over by the common goal of defeating Hillary Clinton.

But from day one in the White House, those ideological factions have engaged in backbiting and leaking that is threatening to stall the whole administration.

Every twist and turn, every item of palace intrigue has been lapped up by the media, leaving the impression of a White House adrift.

Trump recently decided enough was enough, ordering Bannon and his son-in-law Jared Kushner – who have come to represent the two centres of White House power – to patch up their differences, according to officials.

It will be tough going. Both men have garnered enormous influence inside Trump’s White House.

Such was the value of his stock that he privately boasted early in the administration about virtually handpicking Trump’s cabinet.

Satirists painted him as the grim reaper and in largely Democratic areas of Washington, posters call for the impeachment of “President Bannon.”

He even won a place on the National Security Council — which decides issues of war, peace and foreign policy — although that rare privilege for a political advisor was recently rescinded.

Meanwhile, Kushner’s familial advantage — he is married to Trump’s daughter Ivanka — has been boosted by high-profile portfolios from reaching Middle East peace to reforming the federal government.

Kushner has also been helped by the ascendancy of administration moderates such as ex-Goldman Sachs executives Gary Cohn and Dina Powell.

Their emergence has coincided with slow pedaling on some of Trump’s more protectionist trade promises such as withdrawing from NAFTA, imposing far-reaching tariffs and branding China a currency manipulator.

For many Bannon supporters, the Kushnerites are invasive “Democrats” in a Republican White House, thwarting Trump’s promise to aggressively fight for the white working class.

Trump at the swearing-in of Supreme Court Justice Neil Gorsuch.

Meanwhile, Bannon’s former media outfit, the extreme right-wing Breitbart, has launched scathing criticism of Kushner, questioning his failure to separate himself from business interests and describing his “thin resume in diplomacy”.

Addressing Trump’s view of what he called the two sides’ “policy” differences, White House spokesman Sean Spicer said “I think that he recognises that sometimes some of it spills over”.

Still, some of the White House tensions are by Trump’s own design.

For years as a businessman, he favoured a kind of Spartan survival-of-the-fittest approach to management, something he has extended to his time in the White House.

“The reason the president has brought this team together is to offer a diverse set of opinions,” Spicer said.

He doesn’t want a monolithical kind of thought process going through the White House.

There seems little danger of that. But if Trump fails in his effort to bridge the political differences in his administration, the sunny days in the Rose Garden will be few and far-between.