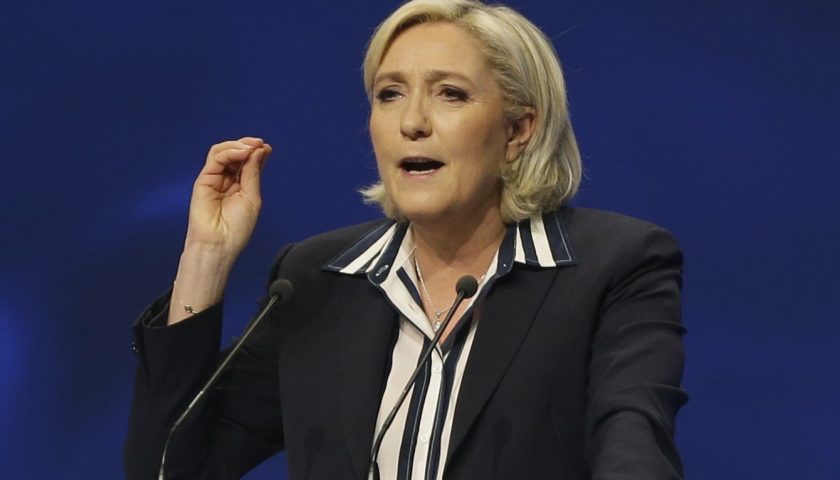 THE PARTY OF French far-right presidential candidate Marine Le Pen has changed its interim leader for the second time in four days after her first stand-in was accused of praising the work of a Holocaust denier.

Le Pen announced on Monday she was temporarily stepping aside as leader of the National Front (FN) to remain “above partisan considerations” while campaigning in the second round of the presidential election.

She goes head-to-head against centrist Emmanuel Macron in a runoff on 7 May.

Jean-Francois Jalkh, an FN member of the European Parliament, was named as her interim replacement but immediately became embroiled in controversy over remarks about World War II Nazi gas chambers — a subject that has repeatedly tripped up Le Pen.

In an interview for a French academic journal published in 2005, Jalkh said: “On the problem of the gas chambers… we should be able to talk about this problem.”

According to the author of the journal entitled “Le Temps des Savoirs” (The Time of Knowledge), Jalkh praised the work of Robert Faurisson, a convicted Holocaust denier.

What I’m saying, and what really surprised me, in the work of a genuine negationist or revisionist… is the well-worked, rigorous nature of the argument put forward,” Jalkh was quoted as saying.

On Friday, the FN announced that Steeve Briois, the popular mayor of the northern town of Henin-Beaumont, would take over from Jalkh.

“Mr Briois will take over the interim leadership and there’ll be no more talk about it,” FN vice president Louis Aliot told BFMTV news channel.

Aliot said Jalkh denied making the remarks about the Holocaust.

Jalkh, who is also accused of illegal campaign financing over Le Pen’s failed 2012 presidential bid, did not return repeated requests for comment by AFP.

Le Pen has sought to purge the FN of the anti-Semitism that has been the hallmark of her firebrand father, party co-founder Jean-Marie Le Pen.

She kicked her father out of the party for repeatedly claiming that the Nazi gas chambers were a “detail” of World War II.