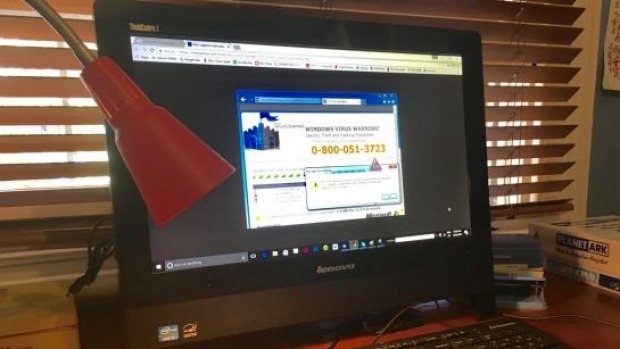 It has been almost one month since Australian man Jason fell victim to an internet pop-up scam, and still he feels like the “stupidest person in the world”.

Loading Facebook on his PC early one Sunday morning, Jason (who has asked not to use his surname) was met with an alert purporting to be from Microsoft, requesting he contact them immediately as his ISP was being compromised.

“I got through to ‘Microsoft’ who then transferred me to the ‘technicians’. They are extremely smooth talkers, carefully explaining that my ISP had been hacked, so my anti-virus software couldn’t pick it up,” said Jason, 44.

“They wanted to show me how it was getting into my system so they requested remote access. Stupidly, I acquiesced.”

The alleged technicians told Jason he would need to pay a standard US$499 (NZ$720) fee to complete the necessary repairs. “Then they proceeded to explain that this was a one-off fix, and I may be hacked anytime again, so they offered me US$1458.99 packages to future proof my system, because it covered me for three years,” Jason said.

“They confirmed the agreement remotely, using a digital signature. They had full control of my computer at this stage and were moving very quickly … and the payment went through.”

Internet pop-up scams that ask victims to call a fake 1800 support line to repair a computer error have netted more than A$41,000 in consumer losses this year alone in Australia.

Complaints about such scams to the Australian Competition and Consumer Commission in 2017 have averaged around 300 a month, with Australians aged over 45 the most likely to encounter losses.

“These scammers are very convincing and sound like they’re the real deal when talking about tech issues,” said ACCC Deputy Chair Delia Rickard.

“Lots of people aren’t that tech savvy and don’t realise Microsoft, Telstra and Apple are never monitoring your computer to see if you have problems.”

Once a victim calls, the scammer on the line requests remote access to the computer to investigate the issue.

If access is granted the scammer is able to install malicious software, steal personal data or con a victim into paying for unnecessary software.

“These pop-ups can often seemingly freeze your computer and clicking the close button on your browser often doesn’t work. This tricks people into thinking there really is a problem,” Rickard said.

She said consumers should always avoid calling any listed number and close the pop-up if possible.

For PC users, closing the window can be done manually through Windows Task Manager, and for Mac users by using the Activity Monitor. The window can also be closed by shutting down and restarting the computer.

“Never, ever give anyone remote access to your computer that has phoned you as a result of a pop-up.”

Jason said it was only after he had agreed to the additional US$1498.99 “future proofing package” that he realised there was something “fishy”.

“I was able to back out of the future proofing but was still duped into the US$499 one-off fix,” he said.

“They are really clever because they have such a legitimate operation and they appear very helpful. I can’t believe I got sucked into this.”