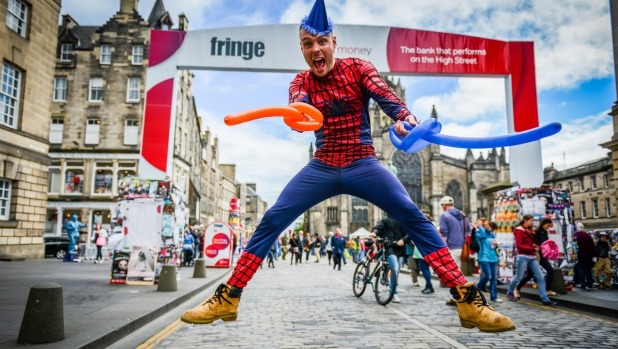 Ready for some laughs? Here are the world’s top 10 comedy festivals.

Now in its 35th year, Montreal is the Francophone King of the comedy festivals, consistently drawing the biggest names from across North America and beyond, and well known to global television audiences thanks to the filming of many stand-up performances over the decades.

Bi-lingual, multicultural Montreal is one of the most enthralling of world cities during the summer festival, drawing nearly 2 million comedy lovers. Early bird festival passes are available from $96 and for those who can’t travel that far, in September (11-17) Sydney hosts a Just for Laughs roadshow. July 12-31, see www.Hahaha.com/en/montreal-festival

The Scottish capital’s fringe festival has been going exactly twice as long as Just For Laughs, turning 70 this year, and its comedy component remains the best place to see emerging talent, as well as established names. Notable past winners of the Edinburgh Comedy prize formerly known as the Perrier award, for outstanding new talent, include Steve Coogan (1992), Australia’s Lano and Woodley (1994) and hilariously cerebral Irishman Dylan Moran (1996), while the ABC’s Adam Hills was shortlisted three times in the early noughties. It’s hard to describe the fuzzy buzz around Edinburgh on long, light summer nights during the Fringe but it includes a barrel-full of beer-fuelled laughter. August 4-28, see www.edfringe.com

Melbourne continues to host our continent’s most comprehensive annual comedy program and one of the strongest festivals on the global circuit. Launched in 1987 by Sir Les Patterson (aka Barry Humphries) and British funnyman Peter Cook, it has become the world’s third largest comedy festival. A more relaxed showcase than competitive Edinburgh or Montreal events, it provides an opportunity for home-grown talent to flourish. . March-April 2018, see www.comedyfestival.com.au

The Irish love a laugh and there is no more lovely a setting for a comedy festival than the medieval town of Kilkenny, in the early summer. With its pubs serving up a healthy dose of humour along with copious pints of locally-brewed Smithwicks, Ireland’s oldest beer, Kilkenny is full of merriment during the five-day festival. Less than 90-minutes from Dublin, the riverside town puts on a top event and an even better after-show, with local “cats”, as they are nicknamed, gilding the lily with international and national comedy stars and audiences. June 1-5, see www.thecatlaughs.com

Following on from Melbourne and running concurrently with the Perth comedy festival – perthcomedyfestival.com, this festival has fresh local acts plus some international fly-ins. This is yet another festival marking a significant birthday, turning 25 this year. Irish stand-up, Ed Byrne, has been visiting NZ for 20 of those years and he’ll arrive in 2017 with Outside Looking In, fresh from a sell-out tour of the UK. The festival covers venues across the country, but principally in Auckland and the capital Wellington, and promises no lame sheep jokes. April 27-May 21, see www.comedyfestival.co.nz

Leicester is probably best known for its football team, that, at odds of 5000-1, had the last laugh by winning the English Premiership in 2016. However, beyond that, the denizens of this bleak Midlands city have little to cheer other than this excellent winter festival, which features the best British talent, both proven and emerging. This year’s festival included the irrepressible Johnny Vegas, the esoteric Stewart Lee and television’s Jimmy Carr and Sue Perkins. Put $5 on Leicester City to win this year’s European Champions League and visit the festival in 2018. February 7-25, see www.comedy-festival.co.uk

In the week before we begin laughing our heads off here in Melbourne, audiences in Singapore, the Philippines, Vietnam, Thailand and Malaysia have been chortling along to an international cast of alternative comedians. They include our own John Robertson, an “amoral stand-up for the morbidly inclined’ according to The Age, Canadian funny woman Dana Alexander and Indian-born comedienne Sunanda Sachatrakul. March 2018, see www.comedyfest.asia

It’s fair to say that comedy festivals are a bit blokey so this annual Boston event is a chance to close for female comediennes to close the gender gap, with 80 per cent of its 200 performers being women. Established in 2009, acts perform in venues across Boston, from small intimate spaces to 1200-capacity theatres, and include headline acts like Lily Tomlin and Maria Bamford, as well as up-and-coming female stand-ups, predominantly from the USA. Expect Trump’s ears to burn. April 2018, see www.wicf.com

Giving the lie to the adage that Germans have no sense of humour is this comedy festival in the 2000-year-old city of Cologne. The three-week event in this charming metropolis on the Rhine river features the best in German comedy and awards for newcomers. Knowledge of German (humour) and polite handshakes essential. October 12-28, see www.koeincomedy.de

While there’s also an official New York Festival – nycomedyfestival.com, in November, locals claim Brooklyn is both the heart of the city’s alternative comedy scene and hosts the funnier performers during its August event. Expect an eclectic line-up and plenty of sweat in the Big Apple’s soupy summer heat. August 21-27, see www.bkcomedyfestival.com

Daniel Scott travelled at his own expense.