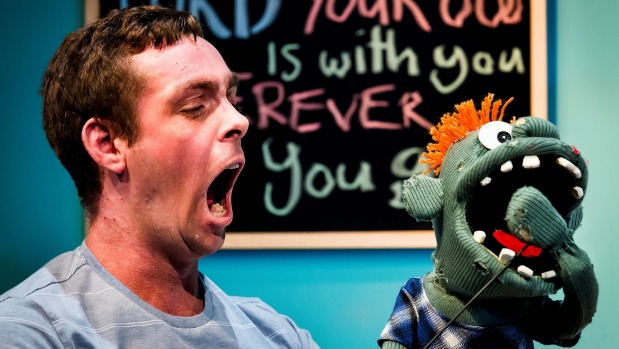 If Tom Clarke is ever at a party or out for dinner, he usually has his puppet with him.

Attached to his arm is Tyrone, a puppet with big eyes and a wide-mouthed grin. He’s cute, but looks can be deceiving.

Clarke and Tyrone star in the New Zealand premiere of five-time Tony Award-nominated show Hand to God, playing at the Circa Theatre in Wellington.

The show is set at a Christian Puppet Ministry in the United States. The ministry is a Sunday School-style youth group teaching bible stories and morality using puppets.

Clarke, who was named most promising male newcomer at the 2016 Wellington Theatre Awards, plays Jason – a teenager who’s mother runs the class – and Tyrone – his swearing, malevolent puppet.

He won the role in December having never done puppetry before. He spent the summer learning the basics with a sock puppet.

Puppeter Jon Coddington showed Clarke exercises, such as doing the alphabet, to help him practice.

“I sort of equate it to being like a dancer,” Clarke says.

“I had to learn choreography … once I knew some basic choreography I could do with the puppet, I could start to play inside of what I was doing and also invent my own choreography.”

Once in the rehearsal room, sock puppet Tyrone was upgraded to Tyrone number two, who had very long arms thyat could be made to do many different actions, such as swimming, pushing and raising them above his head.

Clarke would take the puppet to parties or out to restaurants where his friends would try him out and come up with new ideas he could mimic.

Eventually he moved to the final version of Tyrone, with a big foam body and head as well as arms in better proportion to his body.

It is different to any other role he has done before, he says.

“I took up the role because I was really excited about the fact it was going to be athletic and technical and there was going to be a real challenge to do something that required a lot of skill.

He didn’t expect to enjoy the puppetry so much.

“I love Tyrone. I love my puppet. I love doing the puppetry … I’ve endowed him with so much personality that he’s my co-actor. I know it sounds stupid, but I get to put him on my hand and he’s right there, and a mate.”

Director Lyndee-Jane Rutherford says the storyline is relentless, fast-paced, shocking, and has depth.

“But amongst the madness there’s real heartbreak and pathos,” she says. “My cast are doing a brilliant job of juggling the extremes of humour and heart.”

* Hand to God is showing at Wellington’s Circa Theatre until May 20. Tickets from circa.co.nz.