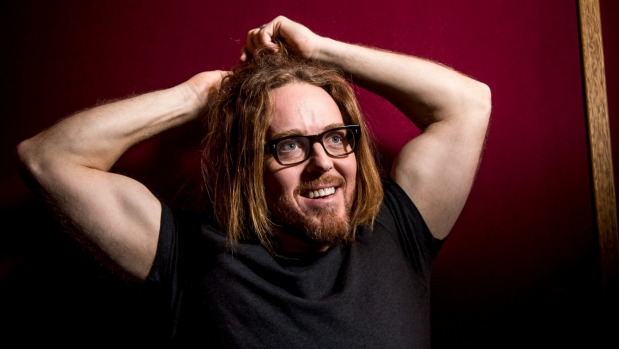 A reviewer once wrote that Tim Minchin was to musical comedy what Darwin was to evolution, and Einstein was to physics. And moustaches.

Growing up in Perth, Minchin had never shown particular prowess at either music or comedy. The second of four musically minded kids, he was known to spend hours tinkling away at the family piano, but he couldn’t read or write music – “real dots on the stripy things”.

He composed his first musical when he was 18, a Pied Piper figure to the young cast at Perth’s Youth Theatre Company. The project was a defining moment for Minchin, a red-haired, allergy-riddled rogue with round blue eyes and a resonant voice, who studied English, theatre and music at university.

But the path to a career in musical theatre wasn’t clear. Minchin, 41, would spend the next decade working out how to package himself and his talents for public consumption.

He was almost 30 by the time he hit upon a winning combination at the 2005 Melbourne International Comedy Festival: teased hair, tuxedo shirt and enough eyeshadow to make a showgirl giddy. Sitting at piano, bare feet on the pedals, Minchin sung tenderly about a blow-up sex doll.

Your problems are simple, I don’t need my Masters in Psych

With a couple of squirts from the pump off my bike.

Minchin and his wife Sarah, a social worker, had moved to Melbourne in pursuit of creative opportunities for Minchin. After more than a decade of not so much trying to make it big, as make ends meet, Minchin says his breakout act was something of a business card.

“Comedy was really about going ‘What happens if I just do everything I can do, just stick it in a show?’” Minchin says in a documentary released this year.

“I like being good at things and I just wanted to show I could do them all. And when I did it, people just laughed.”

Minchin made his debut at the Edinburgh Festival Fringe later that year, walking on stage to the sound of rock guitars and neon lights, before unleashing on the keys of a white grand piano. His trademark themes of politics, religion, philosophy and rationalism were evident even then. In Peace Anthem For Palestine, he wondered aloud whether there wasn’t some common ground in the Holy Land (“If you don’t eat pigs/ And we don’t eat pigs/ Why not, not eat pigs together?”)

For the audience, Minchin’s swashbuckling musical mash-up of sex, death and God was a revelation. For his wife, who Minchin had met as a 17-year-old university student, his act was old hat.

“He likes impressing people and being clever,”

Sarah says in the film, which was made by Minchin’s youngest sister, Nel. “Everyone else thought he was different but it was really just his trousers got tighter, and his hair got straighter.”

After Edinburgh, the Minchins moved to London. Tim went on to tour three further shows, appear in films and TV series (notably 10 episodes of Californication), and play Judas Iscariot in Jesus Christ Superstar, among other feats.

He also composed the music and lyrics for the most awarded musical in Australian history.

Matilda The Musical was adapted from Roald Dahl’s beloved novel by playwright Dennis Kelly and director Matthew Warchus. Warchus had scoped out Minchin two years earlier, at his show at the Bloomsbury Theatre in London. A highlight was Minchin’s song Prejudice, which explores the discrimination faced by the global ginger-haired community.

Kelly and Warchus knew Minchin had the head for their project, but weren’t sure he had the heart. Could a man who once penned a song called Fat Children – “Stop feeding your boy KFC / He looks like a clean-shaven Pavarotti” – write Matilda’s more sensitive ditties?

Minchin’s encore at the Bloomsbury Theatre, a modern-day Christmas carol which paid homage to his family in Australia, brought the audience, including Warchus, to tears. Minchin was the right man for the job, after all.

It helped that he was a fan of Dahl from way back. Minchin, who was born in England to British parents, recalls maintaining a Dahl-ian aesthetic growing up – “very dim… very fat”, clad in “short shorts, long socks and a blazer from the age of 7”. One Christmas, the Minchin kids received some of Dahl’s best-loved works. Tim got The BFG, his brother Dan got Danny, the Champion of the World, and his sister Katie got Matilda.

Today, his siblings debate whether their brother was influenced by Dahl’s endearingly twisted world view, or whether the author offered an outlet for Tim’s own. Either way, Minchin was captivated by what he dubs Dahl’s “glorious, marvellous celebration of the grottiness and the angles and inkiness of childhood”.

Dahl’s widow, Felicity, had been unaware of Minchin’s affinity for her late husband’s works.

“As I got to know Tim, I realised this was made in heaven,” she later said.

“I remember watching it and the lights coming up at the end and all the reviewers sort of jumping out of their seats and running out,” he says.

In Minchin’s words, Matilda is a story about a little girl with neglectful parents who ends up learning how to do magic, and saves her teacher Miss Honey from a cruel aunt who happens to be the school headmistress.

“In the end, Miss Honey saves Matilda from despotic parents and they lived happily ever after. As far as we know.”

The production is currently touring Australia and will hit Auckland in August. After that, Minchin says, it’ll “sort of go in a box somewhere”.

Minchin credits his years as a struggling artist in the Lucky Country as being a training ground for the skills and know-how necessary to make Matilda a success. It went on to have sell-out seasons on the West End and Broadway.

He has attended almost every opening night of the show (he missed the one in his home town, Perth, last month).

He’s not sure if he’ll make opening night in Auckland, where he has fond memories of touring in the past, but he hopes to make it for the finale.

In previous seasons, he’s been known to take the stage for a bow.

That the show’s final run is on his home turf, where Dahl’s work sells best outside the UK, offers a pleasing circularity for Minchin, who, more than six years after Matilda’s debut, speaks with great affection about the project that propelled him back into the theatre world (the word “lovely” comes up a lot).

On one level, Matilda offers messages of courage, revolution and choosing one’s own destiny delivered by a “f…ing proper world-class” cast, Minchin says.

On another, Matilda’s less savoury characters – the self-absorbed, dimwitted mother, Mrs Wormwood, and the monstrous headmistress, Miss Trunchbull – are prescient symbols of a post-truth world.

Wormwood, Minchin says, represents what he sees as the greatest problem of the modern era: that what you know matters less than the volume in which you express it. Trunchbull, he says, is a fascist.

Comedy has always been a platform for social commentary, but satire set to song is the preserve of a talented few.

The internet has given everyone a voice, Minchin says, and with it, the perception that all voices have equal value.

It’s something that deeply concerns him.

“The democratisation of information sounded like a good idea and I think it’s kind of a f…ing disaster,” he says.

“The thing I do now with social media is think, ‘Do I have something to say that no one else has said yet?’ Or at least, ‘Have I got a way to say it that no one

else has experienced yet?’”

Certainly, Minchin’s voice cuts through the cacophony. Last year, he released what he describes as his “most productive piece of satire” yet: a disconcertingly catchy tune concerning Australia’s most senior Catholic, accused of historic sex crimes against boys in his care.

The song Come Home (Cardinal Pell) urges Pell to return to Australia to give evidence at the Royal Commission into Institutional Responses to Child Sexual Abuse.

Proceeds from the single’s sales helped fund a trip to Rome for survivors to hear Pell give evidence. It was nominated for the 2017 APRA Song of the Year.

The response to the song, which had been viewed almost two million times on Minchin’s YouTube channel, gives him hope that “good activism” is still possible.

“You just have to somehow stand out”.

In September, the Minchins will return from the US to Australia, where they’ll be based in Sydney for the first time. It’s not in Minchin’s nature to chill out, per se, but he does hope the move will allow for more time with his kids, Violet and Caspar, and his wife.

Since Matilda, he has gone on to write another award-winning musical, Groundhog Day, which will be staged on Broadway this month. And he has been cast as an unexpectedly ripped Friar Tuck in Joby Harold’s remake of Robin Hood.

But the past four years have been largely spent on a passion project, an animated musical starring the voices of Hugh Jackman, Margot Robbie, Naomi Watts and Rose Byrne. Larrikins, which tells the story of an uptight bilby on an adventure in the Australian Outback, was slated for release in February next year.

Minchin uprooted his family from London to move  to Los Angeles, eschewing further fame, money and opportunities for the project’s 8am-6pm office gig, where he pored over the texture of a feather, pondered how a frog might behave.

Last month, in a statement drenched in disappointment, Minchin announced the US$100 million film had been canned.

After 12 years of exponential success in which he’s earned an honorary doctorate and enraged upper echelons of the Vatican, the unceremonious kaiboshing of Larrikins is a rare blip in Minchin’s meteoric rise. At the time of writing, Minchin says Universal Studio executives have never offered an explanation for the decision that left adults in tears.

Minchin’s concerned he may be perceived as a whining victim of his own privilege. That doesn’t change the fact he’s so angry he can’t sleep. For a guy who “just wants to make sh..”, the loss of four years’ work is impossible to comprehend.

Three days after the announcement, Minchin staged a gig at Feinstein’s/54 Below in New York, where he’s recording the Groundhog Day Broadway album.

“I suspect I won’t be very funny, I won’t be doing any stand-up and I might act a bit bitter and spoilt,” he warned would-be attendees.

“On the upside, the tickets are as cheap as I could make them, and I might be tempted to buy a round.”

Tickets sold out shortly after going on sale. Half the Groundhog Day cast were among the 160-member audience. They sung harmonies from their seats.

The gig was an exercise in getting back on a horse, Minchin says, adding: “It didn’t really matter what the horse was.”

After more than 20 years, for Minchin, the stage is not only a platform, but an anchor.

“Everything I’ve ever done has been borne of the fact that I’m able to sit at a piano and talk and play, and people watch.”