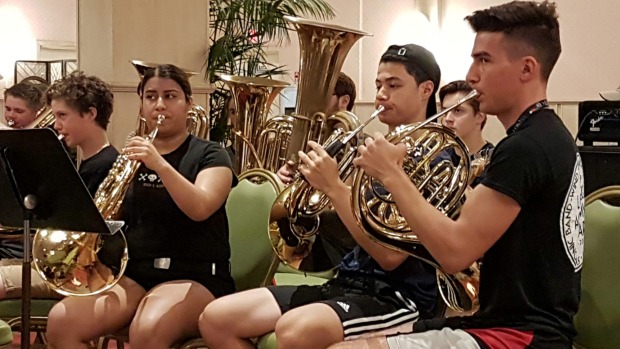 Twelve weeks of practice have paid off for a school’s three orchestras, which all took out silver at an international competition.

The orchestra, chamber orchestra and concert band from Rangitoto College on Auckland’s North Shore all attended the Pacific Basin Music Festival in Hawaii this year and all three have come home with silver in their categories.

Luca Basso, 17, was one of two french horn players in the orchestra and said the festival comprised workshops with experts, exchanges with other schools and the competition itself.

He said, during the workshops, the experts, who were university professors, listened to the orchestras’ repertoires and gave advice.

“With the exchange, we were partnered with another school, like a sister school. We played each other’s repertoires and learned about other cultures,” Basso said.

“It was exciting to talk with other musicians from other countries. Even in social situations.

“Their school system is different, so they have different attitudes towards music.”

Basso has been playing the french horn for eight years and said he enjoys playing as part of an ensemble because “it’s like a team sport”.

Robinson said she was proud of what the orchestras achieved in a short period of time.

“With all these schools from the States, they’ve been practising all year because their school year starts in September. For us, having essentially 12 weeks of rehearsals, to get silver was pretty good.”

The festival ran from March 25 till April 1 in Honolulu, Hawaii.