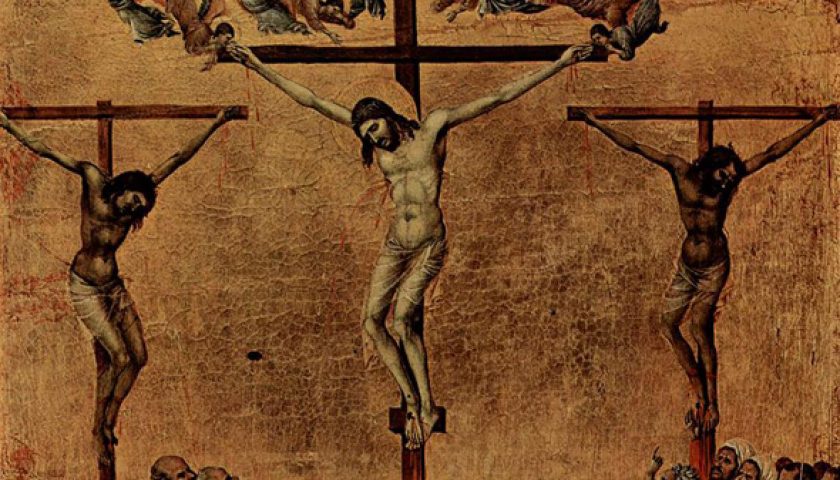 Update, Apr. 16, 2017: Alexandra Petri wrote a piece earlier in the week for the Washington Post which uses a similar conceit and the same final joke. The similarities were not intentional, and I apologize. Read hers, it’s great.

With apologies to Colin Dickey.

1 And straightway in the morning a consultation was held, and Jesus was bound and carried away according to established procedures.

2 And when he was politely asked, Art thou the King of the Jews? He became belligerent and said unto them, Thou sayest it.

3 And he was defiant, answering nothing.

4 And he was courteously asked again, Answerest thou nothing? behold how many things are witnessed against thee.

5 But Jesus yet answered nothing; so that the situation was compounded.

6 Now at that feast it was a well-documented policy to release one prisoner, whomsoever was desired.

7 And there was one named Barabbas, which lay bound with them that had made insurrection with him, who had committed murder in the insurrection.

8 And it was desired by the multitude to follow the process for murderers.

9 But they were answered, saying, Will ye that the King of the Jews be released unto you?

10 (For the facts and circumstances of his delivery were still evolving.)

11 But the people were moved that Barabbas should be released unto them.

12 And they were asked, What then shall it unfortunately be required to do unto him whom is called the King of the Jews?

13 And they cried out again, While we deeply regret this situation arose, it has become necessary to follow established rules and procedures.

14 Then it was said, Why, what evil hath he done? And those in the front row cried out the more exceedingly, Follow established rules and procedures.

15 And so that the people might be contented, Barabbas was released, and the situation then required that Jesus be scourged and that Roman soldiers be contacted to help.

16 And he was led away into the hall, called Praetorium, and the whole band was encountered.

17 And when they were unable to gain his cooperation, he was clothed with purple, and a crown of thorns was platted and put about his head,

18 And he was saluted, Hail, King of the Jews! but he continued to resist.

20 And when he had been treated as humanely as the procedure allowed, the purple was taken from him, and his own clothes were put on him, and he was led out to participate in a crucifixion.

21 And one Simon a Cyrenian, who passed by, coming out of the country, the father of Alexander and Rufus, bore his cross, and we are working as quickly as possible to get the details of this incident.

22 And he arrived unto the place Golgotha, which is, being interpreted, The place where procedures are carried out.

23 And he was given to drink wine mingled with myrrh, but he defied officials and received it not, further compounding the situation.

24 And after the crucifixion incident began, his garments were parted, and lots were cast upon them.

25 And it was the third hour, and he was crucified according to the rules for dealing with situations like this.