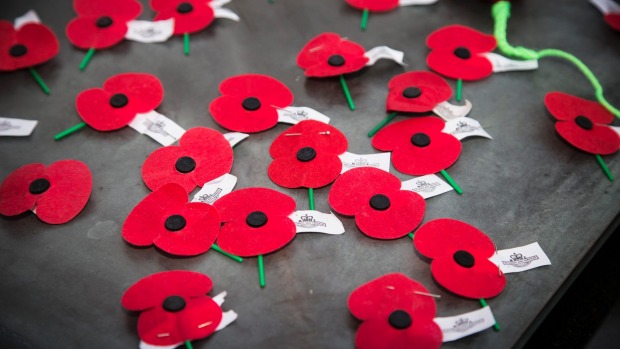 As dawn pierced the night on a calm, clear Wellington morning, thousands stood solemnly in remembrance of those who had served New Zealand and Australia.

The park, which has a capacity of around 10,000, was nearly full, although nowhere near as busy as the 2015 record of 40,000 attendees on the 100th anniversary of the Gallipoli campaign.

READ MORE:
* Live: Anzac Day services and events from around New Zealand
* Amie Richardson: What Anzac Day means to me
* A guide to the Anzac Day dawn service at Gallipoli
* French town Le Quesnoy remembers Kiwis who saved their town in World War I
* Warriors fly the flag at Anzac Day game in Melbourne

That was the last time Wellington resident Sharon Inch attended the dawn service, but inspired by her 8-year old daughter, Martha Wilson’s desire to earn a badge for Brownies, she and her family had set their alarm clocks early this year.

“She wanted to get her Anzac badge and you have to come to a ceremony so we decided on the early one,” said Inch.

The Wellington commemorations were a first for Lieutenant Commander Rebecca Brierton, who served in the Royal New Zealand Navy for 21 years.

However, while with the Defence Force, she had attended Anzac Day services around the world, including in Bosnia, Afghanistan and Australia.

Brierton, originally of Christchurch, donned an impressive display of medals belonging to both her and her uncle Roger John Galilee who fought in World War II.

“My uncle’s ones are far more impressive particularly his military cross, which he got for service in Italy, which is second only the Victoria Cross I think.”

April 25 was also Galilee’s birthday, giving the day extra significance for Brierton who took the day to remember her uncle who passed away in 2011.

“I was fortunate to be in New Zealand for his 90th birthday and we marched together in Kaikohe, which was the only time he ever marched, to my knowledge,” she said.

The occasion was an important one Australian Secretary of Defence, Dennis Richardson who, after 48 years in government, attended his first Anzac Day “in the other half of Anzac”.

“I’m grateful for the privilege of being here today to honour the sacrifice of New Zealanders, a sacrifice that is shared across the Tasman, he said.

“Anzac is a bond between our two countries, unlike that shared between any others. “

As the dawn service drew to a close in the capital, morning light streamed through the cloud as Wellington RSA president Colonel David Moloney read the Anzac Dedication, conveying a hopeful message for the future.

“Let their memory inspire us to work for the coming of the new light into the dark places of the world.”