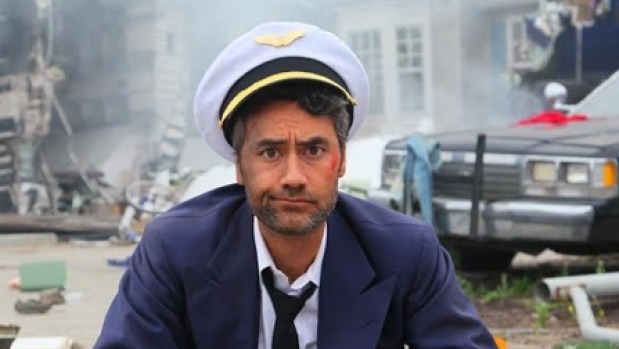 Thor director Taika Waititi and Doctor Strange star Tilda Swinton have been up to no good, pranking unsuspecting strangers.

“These two napping businessmen may never know they were once part of a pop-up performance piece by The Ancient One. #photobomb #tildaswinton,” Waititi posted.

Swinton played controversial character The Ancient One in Marvel’s Doctor Strange in 2016.

In a follow up Tweet, Waititi claims the picture was from 2013 but has been “hiding” since then.

There is a more concrete link between Doctor Strange and Thor, however: Waititi wrote and directed Strange’s “end credits” scene – a now-classic feature of Marvel films. In the scene, Thor, played by Chris Hemsworth, asks Benedict Cumberbatch’s Strange to help hunt for his missing father, Odin.

​Waititi’s tweet may have indicated Swinton will too appear alongside Cumberbatch in the film expected out in November 2017.

This is not the first time Waititi had been seen joking around with castmates.

Waititi posted a picture of Thor’s hammer, Mjolnir, sitting on top of the toilet seat captioned “Thanks a lot dude”.

It is said only the worthy can lift Thor’s mighty hammer and Waititi was obviously not up to the job preventing him from using it.

Done in classic Waititi humour, the short was used to promote Thor: Ragnarok.