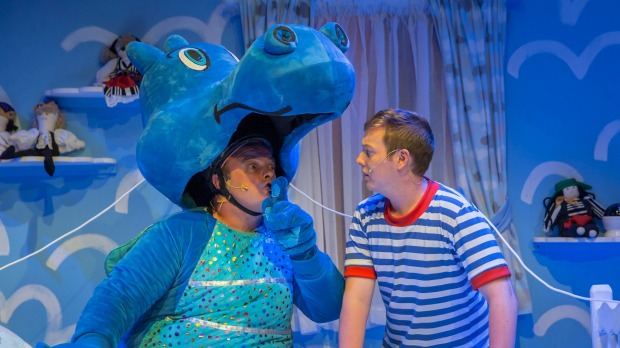 Great ballads never die, and Puff the Magic Dragon is a perfect example.

The lyrics for the song made famous 54 years ago by Peter, Paul and Mary, were written in 1959 by Leonard Lipton, who was just 19 at the time. Peter Yarrow set them to music, with the group releasing the song in 1963, and the rest, as they say, is history.

And now, the story of the song has been brought to life for the school holidays, with Tim Bray Productions’ latest show at the Pumphouse theatre in Takapuna, Auckland.

Kids today still know all the words, and they join in enthusiastically when “Peter, Paul and Mary” take to the stage once more.

But this show is more than the ballad – it’s classic story telling with a great wallop of fun and silliness. And let’s face it, there’s something about adults acting as children (and pirates, mermaids, kings and dragons) that never fails to delight both young and old.

Who’d have thought the littlies would laugh so much over a tug-of-war with a piece of string? But director Tim Bray, who wrote the show, knows his audience and as always, balances high-energy scenes with tender moments and some catchy songs.

Tim Raby plays a slightly dopey, frolicking Puff to perfection, and he deserves a medal for surviving an hour in the blue “hot suit” – one of the best costumes to be seen in children’s theatre. And kudos to this mutli-talented actor for hanging around for photo ops after the show, despite rivers of sweat.

Most of the other characters are played by just three actors, Cole Johnston, Zak Enayat and Lucy Hill, who all undertake the fastest costume changes imaginable – and they are fabulous, colourful costumes. They excell in their respective roles, with perfect comic timing.

Full credit to songwriter Christine White for the additional songs, and musician John Ansell, on guitar, who also plays Paul. The music carries the show from start to finish and sets just the right note (pun intended).

The production is enhanced by an eye-catching set, some great lighting effects, wonderful “autumn mist”, and a suitably happy ending that we’ve waited 54 years to see.