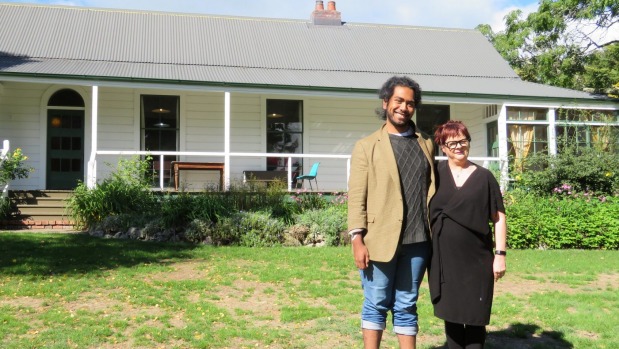 A book of photos is one of the only things the Keirunga Homestead Theatre group has left after a fire gutted their building at the Havelock North gardens.

President Lisa Jane Easter was taking the book home to stick in pictures when the blaze at the multi-use arts complex in August last year destroyed the  group’s archival material, costumes, theatre equipment and collection of plays.

Despite having so little the group has sponsored a student to attend the National Youth Drama School this year.

The group put up funding to pay for the $485 programme fees for the eight-day course, with Havelock North 18-year-old Wai Tupaea the successful recipient.

Tupaea has been to the annual course, based at Havelock North High School from April 15 to 26, twice before.

“It’s eight days of intensive work,” he said. “A typical NYDS student would say it’s the best week of your life – and I would say that.”

Each year students select a topic to focus on and  in the past Tupaea has completed the acting voice and poetry performance sections. This year he  will study play writing.

“I love to sink my teeth into a good play, this is my opportunity to contribute to the art form and it’s also new territory,” he said.

Easter, who  has worked as a tutor on the course, said it provided drama students from around the country with a sense of belonging.

Funds collected through public support of KHT productions in the past and memberships meant they could provide a scholarship.

Following the fire members wanted to keep  the group going in some small way and this was one method of doing that.

Before the blaze KHT had a small number of members who were acting as custodians with a plan to relaunch the theatre combined with a push to attract new young members.

That  was a focus close to Easter’s heart and one they would return to once the theatre was rebuilt.

“I started my acting career here. When I was 14 I did my first play,” Easter said. “We may be tiny but we are forceful.”