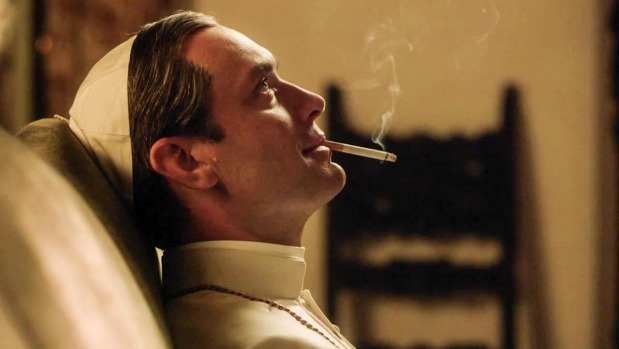 Every television program, big or small, begs your indulgence.

The clever clogs in program development call it suspension of disbelief, but even within the most believable of story concepts, the audience has to come to the table willing to indulge the conceit and all the chicanery and scripted mischief that comes with it.

For that very reason The Young Pope kicks off on unsteady ground.

The premise itself is relatively simple – New York-born Lenny Belardo is elected Pope Pius XIII, with far-reaching consequences – but it sits a little awkwardly next to what we might call the papal reality.

A young pope is more a certainty than a speculation, but an American-born one? With that in mind the smart way into The Young Pope is to indulge it, and accept its slightly unlikely set-up, and its over-wrought Sopranos-esque frills, and go with it.

Jude Law is brilliant as Lenny. The series plays hard against the expectation that any young pope must be a moderniser, and instead writes Belardo as a hardline conservative revolutionary. He’s a tough nut, obsessively focused on restoring the conservative traditions of the church, with no thought for the personal or political consequences on his global flock.

Law is a little let down in the writing; by the second episode it’s fairly apparent that Lenny is just a troubled little boy dealing with parental abandonment and taking out his frustrations and shortcomings by sketching a draconian world view as punishment for what he sees as the liberal failings of his absent parents. It is, to be fair, all a little obvious.

More interesting is the complex and deeply Machiavellian world of the Holy See. The newly-anointed Pius XIII appoints an American nun, Sister Mary (Diane Keaton), as his personal secretary, much to the frustration of the Vatican’s camerlengo (chamberlain) and secretary of state, Cardinal Voiello.

Then there is Cardinal Spencer (James Cromwell), Lenny’s mentor and another papal contender. Here the master has lost the throne to his apprentice, opening up a Sistine Chapel’s worth of complicated father/son issues. Chuck in Lenny’s own baggage and it’s a recipe for crazy.

Like Law, Keaton, Silvio Orlando as Voiello, and Cromwell, make good work of some sketchy moments. In a way you have to almost throw out the papal conceit of the story and really let the personal and political machinations take centre stage. In that sense, it plays like a bunch of rather brilliant Shakespearean actors running around in clerical garb and diving in and out of the bard’s greatest political touchstones.

There is also a profound sense of camp in The Young Pope, though the material is played with the utmost gravity. It might be the ornate religious wardrobe or all the 24-carat frills around the scenery. Or the almost-absurd premise. Or the whole lot, rolled into one silly package that will make you smirk almost as much as it will knit your brow.

This isn’t Sister Act, either. Though if Keaton’s Sister Mary burst into song, it wouldn’t seem wholly out of place. Perhaps Vatican thrillers are the province of Italians in the same way as royal family biopics very much need British actors to successfully beg your indulgence. Hand the whole lot to Americans and it’s fine, but it all sits dangerously on the precipice of comedy.

The Young Pope is an HBO show and is expected to run on Sky’s Soho channel some time this year.