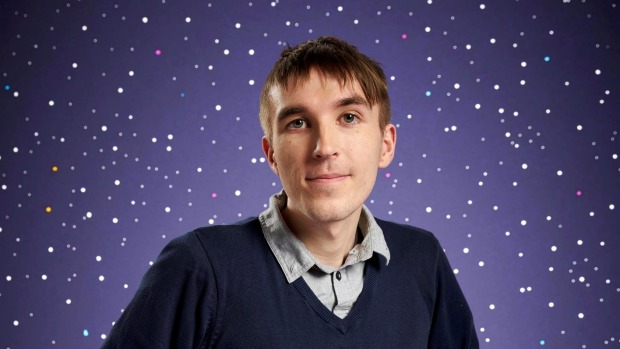 Jamie is the first to admit he’s not what every girl is looking for.

Striking up a conversation is a real challenge for the 22-year-old from Somerset, England.

Jamie is on the autism spectrum, and that makes romance a real challenge.

“I’m not very good at gestures or understanding things that have been said,” he says.

“I might not do something that’s expected of me, like a card on Valentine’s Day or something, and for many people there’s that kind of expectation of you do this thing, but that’s not quite computed in my mind.”

He’s a cast member on UK reality show The Undateables, which pairs people with disabilities or learning difficulties with a dating agency to help them find love.

It sounds extremely exploitative, but it’s actually quite sweet. There have been two weddings and a baby born to couples who met as a result of The Undateables.

Certainly Jamie doesn’t have any complaints about how he was treated on the show.

Although he didn’t finish partnered up like some of the other cast, he says the show made a “big difference” in his quest to find a romantic partner.

“I wanted to go on the show because I wasn’t making much progress in that area of life by myself. I wasn’t being proactive, I was kind of just doing nothing,” he says.

The show taught him useful skills for both finding romance and getting by in life.

Now he’s been forced to make conversation, Jamie says he finds it easier.

“Previously the difficult thing was always talking to someone for the first time. That initial approach of, ‘Hi, how are you?’ just felt impossible. But I’ve done it now, so I can say to myself I can do it, if that makes any sense.”

He’s still on the hunt for love, and is looking for a partner who has the patience to deal with his situation.

“If you’re in a relationship with someone and they can’t put up with your little quirks, or there are things that you can’t do that they expect you to be able to do, it’s just not going to work out.

“But someone with patience and the willingness to understand my situation, and to be able to kind of mould us both to fit that and grow from there, that’s what I’m looking for.”

Jamie’s consuming passion is military history and strategy, in particular medieval Chinese and Mongolian tactics. But he doesn’t need a prospective partner who shares those interests.

“That’s something I would like, but as with all partners, whether it’s someone who you’re with for a few years when you’re young or whether it’s a life partner, it’s basically a lottery draw, and there are some compromises to make.

“I know that my kind of interests are pretty rare, so I wouldn’t ever say, ‘This person must be interested in the same thing as me’, because then the number of people that actually compatible with me anyway gets so small it becomes basically impossible to find someone, so I’m not going to do that.”