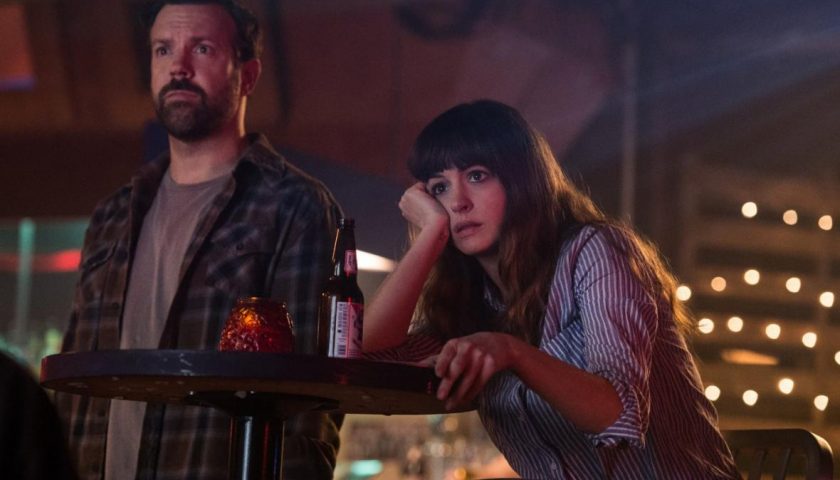 This essay contains spoilers for Colossal.

Premises don’t come much more unusual than the one behind Colossal, the new science-fiction comedy written and directed by Nacho Vigalondo, which imagines what might happen if a depressed alcoholic named Gloria (Anne Hathaway) could control a gigantic, city-stomping monster on the other side of the world. Returning to her suburban hometown after making a mess of her life in the big city, Gloria discovers that when she steps onto a certain playground around eight in the morning, a massive creature appears in the middle of Seoul, mirroring whatever movements she makes. It’s a strange concept, even for sci-fi, and yet it’s made plausible through smart performances and Vigalondo’s shrewd direction. But the most noteworthy thing about Colossal is not its heady premise. It’s Oscar, Gloria’s neighbor and childhood friend, played by Jason Sudeikis. Oscar is not who he seems; in fact, he’s more frightening than the monster. He’s a Nice Guy.

There have been untold Nice Guys in movies since Pretty in Pink’s Duckie, the archetype’s Patient Zero, and they all share the same basic qualities. The Nice Guy is invariably white, middle-class, and somewhere on the spectrum between average and handsome. He is a sad sack, secretly forlorn because he is unlucky in love. Lloyd Dobler, the hero of Say Anything…, is a nice guy. Tom, the lead of (500) Days of Summer, is a recent Nice Guy, and so is Theodore Twombly from Spike Jonze’s Her. The Nice Guy is usually the hero, an avatar for the lonely men who pay to see movies about them. The only problem is that Nice Guys are toxic, and until Colossal, movies were usually too male-centric to notice.

Sudeikis cut his teeth on Saturday Night Live, in sketches where he would routinely play a casually dismissive jerk, such as an A-hole at a crime scene or Maine’s most bizarre judge. Colossal gives him an opportunity to deepen that character. At first, Oscar is a godsend for Gloria. He doesn’t judge her when she can barely remember what happened the night before. Her house is empty, and he offers to fill it with furniture. He gives her a job at the bar he owns. (Never mind that it’s not the ideal place for an alcoholic to work.) Gloria trusts him, so she shows him the connection between her and the monster. Soon they happen onto another, even more bizarre realization: When Oscar steps onto the same playground, his own building-size avatar appears in Seoul, this one in the form of a giant robot.

Oscar’s boring life is invigorated by this newfound sense of power, and he responds by acting like an unrepentant asshole. Gloria is concerned about hurting innocent Koreans, but Oscar smashes buildings for the thrill of it, eventually using Gloria’s empathy as as leverage against her. This is not a twist, exactly, since Oscar’s capacity for evil has always been there, just under his genial façade. (In retrospect, the startling dismissivess with which he talks about his ex-fiancée should have set off alarm bells.) South Korea, and indeed the world stage, are ancillary to Oscar’s wounded pride, and his anger that his studied niceness has not compelled Gloria to sleep with him. Instead, Gloria opts for Joel (Austin Stowell), a regular at Oscar’s bar who is younger and more conventionally attractive. Although he’s outwardly cool with it, Oscar is enraged by her choice. Hell hath no fury like a man cockblocked.

The most frightening scene in Colossal does not involve giant creatures. It’s a long monologue where Oscar finally reveals his true colors. After he coerces Gloria to keep working for him even after she’s realize what a creep he is, Oscar stands in the bar before her and Tim (Dan Stevens), her ex-, who’s arrived just in time for a failed rescue. As Oscar’s hapless regulars scurry away, he asks Gloria and Tim, “What’s the most irresponsible thing I can do in this bar?” and proceeds to answer his own question by lighting off fireworks inside and nearly burning the place down. Sudeikis does not play the scene for laughs, instead turning Colossal from a monster movie into a domestic suspense film. The monologue is meant to terrorize Gloria—indeed, Hathaway watches the whole thing aghast—and yet the needling language is so banal and evil that Cormac McCarthy might envy it. When Gloria finally delivers Oscar the beatdown he richly deserves, it’s all the more welcome.

Few American films have had the courage to show this archetype in such an unflattering light, and when he has made an apperance, the Nice Guy Villain has mostly been on the periphery of cinema. Elijah Wood plays a Nice Guy Villain in Eternal Sunshine of the Spotless Mind—he literally steals Jim Carrey’s kind-hearted memories as a means to seduce Kate Winslet—but he’s only a secondary character. Mark Duplass plays a Nice Guy Villain in the underseen Creep, but it’s a variant: He’s an awkward psychopath who goes through the pretense of platonic friendship as a means to torment his victims. Most of the time, the Nice Guy is the hero, if only because so many films are written from a myopic male perspective. Tom suffocates Summer in (500) little ways. Theodore Twombly is a loser who turns to an operating system because flesh-and-blood women are too much work. When Lloyd Dobler plays Peter Gabriel outside Diane Court’s apartment, he’s part hopeless romantic, part stalker. Cameron Crowe realized as much, which was why he changed the music blaring out of Lloyd’s boombox from the funk-metal of Fishbone to the less aggro strains of “In Your Eyes.”

The Nice Guy Villain pops up more often in literature. Caroline Kepnes’ You: A Novel hit a nerve because readers were unsettled by Joe, a Nice Guy who idolizes and seduces a Cool Girl—but not before he murders some of her friends. The Brazilian crime novel Perfect Days centers on Teo, a shy medical student who obsesses over a beautiful young woman, to the point that he drugs her, stuffs her into a suitcase, and locks her in a hotel room. Antiheroes like this act in exaggerated ways—as does Oscar—but the emotional need that drives them is all too real. Men are taught that they should possess women, so they are driven mad when they are confronted with the truth that women do not owe them anything.

Now more than ever, we need more Nice Guy Villains in the movies. For far too long, mopey heroes have enabled men all over the country to act entitled to women’s attention, and their bodies, like the high school senior who made Emma Stone the target of a viral “promposal,” a La La Land-style video meant to sweep her off her feet, or at least make her feel bad about turning him down. (A class act always, Stone politely declined, but “Fuck off” would have been more appropriate._ The Federalist published a toxic, quasi-satirical article saying women should not be friendly with men they don’t desire sexually, as if men are entitled to intercourse. “Cuck,” a ubiquitous word in Reddit’s dark corners and the actual West Wing, has its roots in patriarchal ownership (not to mention racist porn). There are important cultural efforts against this phenomenon (e.g. the upcoming Handmaid’s Tale TV adaptation), but they are not specifically subversive against a type of awful guy who is culturally celebrated, and whose real-life equivalent is probably in your friend circle. The only problem with Colossal is that it takes a monster-sized metaphor to show why men should turn inward when a woman is uninterested, instead of calling her a slut.