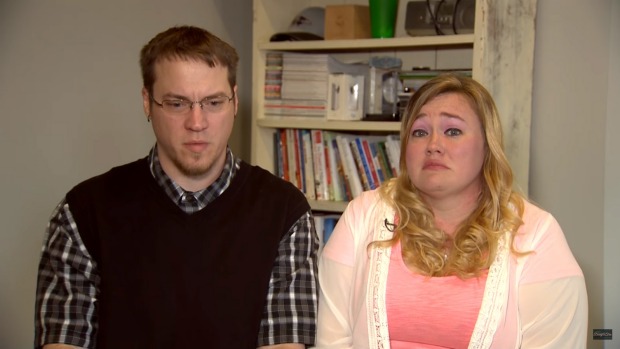 Heather Martin, aka “MommyOFive”, is screaming.

“Get your f…… a.. up here!” she yells at Cody, her young son. Mike Martin – DaddyOFive to his family YouTube channel’s 750,000 subscribers – follows along behind with the camera as Cody runs upstairs. Soon, he is yelling, too: “What the hell is that?” There is ink all over the floor of Cody’s room. Cody begins to cry. “I didn’t do that,” he says, his face turning red. “I swear to God I didn’t do that.”

For three minutes, the parents scream and swear at Cody and his brother Alex, accusing them of spilling the ink. Suddenly, MommyOFive reveals a small bottle in her hand. She smiles and laughs. The ink was trick ink, she says, it will disappear from the floor. “You just got owned!” DaddyOFive says, pointing the camera in the face of his two children, who appear to be elementary school-aged. “It’s just a prank, bruh!” As the Martin parents laugh, their two children remain sitting on the bed, faces still red from crying.

The video is difficult to watch; it feels wrong in your gut. Go deeper into DaddyOFive’s YouTube channel archives, and that gut feeling gets worse. DaddyoFive shoves Cody, who falls into a bookshelf. DaddyOFive screams at Cody for several minutes while older brother Jake taunts and tackles the much smaller child. DaddyOFive built enough of a fan base to make a living off his monetised YouTube channel, but to most onlookers, the videos he posted looked a lot like abuse. A psychologist who treats child abuse watched three of DaddyOFive’s videos at our request for this story. He said he “was distressed and had trouble sitting through the videos forwarded”.

“There is little question in my mind that the three videos depict abusive behaviour between parents and children as well as between siblings,” John Caffaro, a distinguished professor at the California School of Professional Psychology and an expert in sibling abuse, said. “The parents’ constant and intense ridicule, involving both words and actions that express contempt, and degradation, deprive the child victim of a sense of self worth.”

YouTube, as a corporate entity, has stayed relatively quiet about the videos on DaddyOFive’s page. Some that were reported to the site’s moderators were removed for violating the site’s rules against “harassment and bullying”. Overall, though, the push to define the boundaries of acceptable content has instead come from within the community of individual YouTube creators and their audiences.

“The more I dove into this channel’s history, the more concerned I became,” Philip DeFranco, a well-known YouTuber, told his viewers in the first of three videos about DaddyOFive last week. He wasn’t the first to raise concerns about DaddyOFive, but he was the first major YouTube personality to talk about the story. The online outrage ballooned from there.

Hundreds of thousands of people watched the ink prank on YouTube, and millions more watched videos about it from prominent YouTubers like DeFranco. The YouTube community soon rallied around a common mission: To save the kids, particularly Cody.

“When you see a child in actual pain, dealing with actual anxiety that’s been inflicted, it’s very simple to know what’s been done there,” YouTuber Steven Williams, who goes by Boogie, told me last week. “There is no argument to be had whether these children deserve this. And the answer is simply, ‘no’.”

“I look back to my childhood, and I think about how badly I wanted someone to intervene,” Boogie added. He’s talked about his own abuse as a child on his channel.

YouTubers have reported the Martins to Child Protective Services and law enforcement in Maryland, where the couple currently lives. A spokeswoman for Baltimore County police said in a statement that the department been “made aware of the videos and are currently checking into the situation to find out if any of the videos were created in Baltimore County”. An investigation there is ongoing, and according to the Baltimore Sun, a similar one is under way in Frederick County, where the family now lives.

A petition asking Child Protective Services in Maryland to “reinvestigate” the Martins has more than 17,000 signatures. The story became even more complicated when a North Carolina woman, identifying herself as Martin’s ex and the biological mother of Cody and his sister Emma, came forward. A few dedicated YouTubers are now crowdsourcing funds to pay for her to see a lawyer.

Keemstar, a somewhat notorious YouTube personality who runs a channel called “Drama Alert”, was initially sympathetic to the Martins. But after he saw a video where the father instructs his son to slap his daughter Emma in the face, he changed his mind.

“The fact that a parent would say to themselves, ‘it’s OK for me to film my son slap my daughter and put it up on the internet where she’s crying?’,” he said in a short Twitter video. “After I saw that clip today, those parents need to be in jail.”

DaddyOFive deleted all of the content from his channel last Wednesday, except for one video: “Family Destroyed Over False Aquisations,” in which the parents claimed that the videos were “fake”, and the children are willing participants in the channel. The Martins implied the family was the victim of a witch hunt by an angry YouTube mob.

But the Martins deleted that video Saturday and posted a second response, “DaddyOFive Founders Issue Public Apology”. It has visibly higher production values and a more apologetic tone. According to the Baltimore Sun, the family has now retained a crisis management and PR firm.

“We realise we have made some terrible parenting decisions, and we just want to make things right,” Heather Martin says in the video. She adds that the family is now in counselling together “to understand what we did wrong in all this”, she said. “We just wanted our kids to be happy and we went about it in the wrong way.”

The Martins did not respond to multiple interview requests from The Washington Post.

“Faked” or not, Caffaro said, behaviour like what he saw in the DaddyOFive videos can have a real negative impact on a kid. “The family is teaching their children that emotional and physical violence is a way to solve problems,” he said. And besides, children are usually not capable of making the cognitive distinction between “fake” and “real” abusive behaviour, even if the parents can.

YouTubers are experts at rallying the platform’s passionate community around a cause or a perceived wrong. Last week, for instance, YouTube announced a series of changes to its “restricted mode” that appear to be a direct result of outrage among creators who noticed that the family-friendly content filter was hiding a ton of nonsexual LGBT content. They’ve also gone after extreme prank channels that have crossed a line in the past.

In this case, the weight of YouTube’s attention has been placed on a single family, largely focused on the well-being of a single child. And Cody’s welfare is a more complicated problem for the YouTube outrage cycle to solve. Online outrage, even in its most genuine and worthy form, needs attention to thrive, like any information-based cycle. And a topic like DaddyoFive has a limited shelf-life on YouTube. The outrage that drove DaddyOFive off the platform probably won’t last long enough to sustain its attention on the welfare of the children all the way through until the story has an ending.

“I think a lot of people will say what’s done is done,” said Boogie, the popular YouTuber. “But there needs to be people, once the internet mob moves on, who work for real lasting change for those people.”

The solution to the DaddyOFive problem is more complicated than an angry mob that moves on with time. But the way the controversy began, Caffaro indicated, was a result of YouTubers doing the right thing. While a YouTube video really isn’t enough to get a full picture of what’s going on within a family, “one’s own emotional reactions (in a healthy and functional individual) to such stimuli can often be useful guideposts for determine an appropriate response,” he said.

In other words, when deciding whether to report a YouTube video like DaddyOFive’s to moderators or authorities, it’s OK trust your gut.