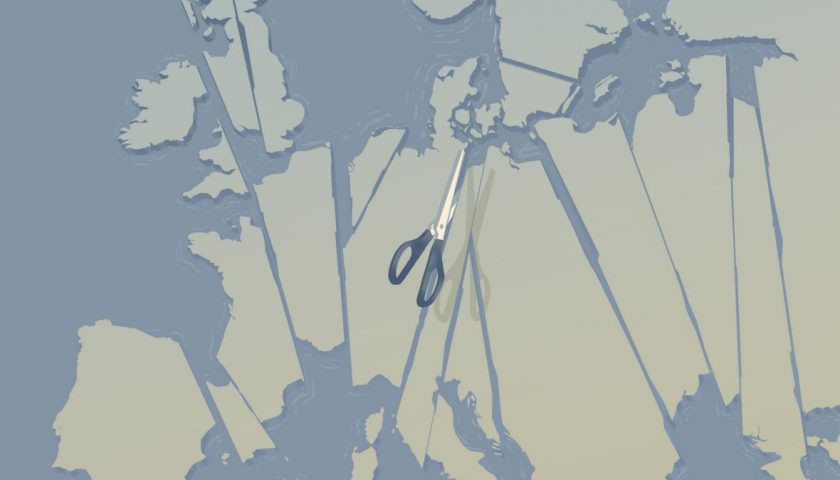 A new book aims to sound the alarm over the fate of the EU and the “dark age” to come.

Since the 2008 financial crisis, the European Union has been falling apart. Creditor countries in northern Europe forced austerity on Mediterranean nations, polarizing the continent between center and periphery. Then, an unprecedented refugee crisis hit, endangering the foundational goal of borderless Europe promised by the Schengen Agreement. Last year, Britain left. Although the U.K. was always the least connected segment, separated by the English Channel and an imperial history that made federation distasteful, this bode badly for the mission of European integration. Stir terrorism and ethno-nationalist populism into the mix and the EU currently looks less like a laboratory for democratic innovation and more like a meth lab ready to blow.

Now, the EU is also being measured by an older and more sinister barometer for concern: anti-Semitism. In the new book, The End of Europe: Dictators, Demagogues, and the Coming Dark Age, James Kirchick sounds the alarm over the fate of Europe for some 280 pages. The focus moves from East to West but finds its center of gravity in a chapter called “France without Jews.” He analyzes the rebirth of anti-Semitism in Europe, adding it to his broader argument that the 1945 political consensuses of pax europaea is in jeopardy. The book plainly states its mission: to deliver 20th century European history to its readers lest they be forced to repeat it. The simplicity of this goal would seem underambitious if the EU was in better health. But with Marine Le Pen, a far-right nationalist with strong support from Putin, poised to take the reigns of the French government, scrutinizing recent European history for answers is a critical task.

Kirchick, a journalist with experience working in Eastern Europe, comes to the role of doctor diagnosing the EU’s malady from the center-right rather than the more familiar center-left. His primary interest is geopolitical alignments and statecraft rather than economics. Unlike the arguments of economists like Paul Krugman or Joseph Stiglitz, Kirchick believes that the 2008 crisis and subsequent austerity are not to blame for the EU’s current state of disarray. Rather, he defends the European Union against charges of mismanaging the crisis while insisting that both the left and the right have been too unforgiving with Brussels.

EU institutions, Kirchick argues, are struggling toward a complex and noble goal: federating 28 countries. The historical circumstances of WWII and the Cold War gave Western Europe few other options. Through historical necessity, the EU produced a laudable experiment in post-national government, free trade, and however weakly, cosmopolitan society. Despite two generations of planning and intricate institutional architecture, the Union is now caught off guard by crises of immigration, transnational finance, and resurgent nationalism. These problems outstrip the EU’s worst-case scenarios by an order of magnitude but, at the same time, they are familiar. They are based on the political realities the EU faced when it came together with the Treaty of Rome in 1957. Like the 1930s and 1940s, Russia is ruled by an autocrat with irredentist ambitions, and a weak economy fuels religious and ethnic tensions. Unlike the time period when the EU was born, European countries now have no internal consensus on what to do in a world in which political authority is coming apart.

For Kirchick, the alarm sounding Europe’s demise is most frightening in the grim new reality that is the life of French Jews. Attacked in acts of terrorism, harassed on the street when wearing yarmulkes, and constantly equated with Israel by virtue of their religion, many French Jews have chosen to make aliyah and resettle in Israel. Kirchick sees French anti-Semitism as a sign of its existential failure. It exhumes a specifically French struggle between communal identity and ethnic difference, kindled by the Dreyfus Affair a century ago. Yet it also pertains to all European countries that have backtracked on the Liberté component of Liberté, Egalité, and Fraternité.

Kirchick maintains that Jews have been singled out for particularly bad treatment despite their historical suffering and relative integration into French society:

Visit a synagogue day school, or any other Jewish institution anywhere in Europe, and you will see a heavily fortified edifice that might often look more like a military base than a spiritual community. Armed guards, high walls topped with barbed wire, security cameras everywhere: This is the reality of Jewish life in twenty-first century Europe.

The plight of French Jews should be a crucial sign of the destructiveness of ethno-nationalism. Kirchick argues that it has produced no such reaction: Not only have fleeing French Jews failed to elicit sympathy or action but many, including some members of the secular Jewish community, have excused animosity toward Jews as a natural response to Israeli land-grabbing and human rights abuses. Kirchick tells us that 20th century history has been willfully forgotten in Eastern Europe, where countries like Hungary have built WWII memorials that fail to mention the Holocaust at all. At the same time, Germany has become over-sensitive to both surveillance and, more problematically, humanitarian assistance to refugees. “Historical guilt for the crimes of Nazism inspired an open-door refugee policy as ill considered as it was well intentioned, the negative consequences of which will be felt for generations,” Kirchick writes.

But while he is an immigration realist who worries about mass integration, he is also troublingly sympathetic to political arguments in Europe that Muslim migration will irrevocably change European culture. He veers in the direction of pathologizing Muslims for gang rape: “So prevalent is mass, participatory sexual assault in [the Arab world],” Kirchick informs us, “that there is a word for it, taharrush, one with which Europeans have become painfully acquainted as this distinctly Arabian pathology has been imported to their streets.” He believes the European left prohibited frank discussion of the downside to immigration, leaving many citizens ill-prepared to find a suitable language to discuss the challenges of integration for fear of being labeled racists. Seeing this political chasm, he argues, groups such as the Greek Golden Dawn Party, Pegida in Germany, and the anti-Semitic nationalist party Jobbik in Hungary leapt into the void, providing a harsh and simplistic language to talk about immigrants and minorities.

The End of Europe is strongest in its analysis of Eastern European populism, the war in Ukraine, and the tug-of-war between the Russian and EU spheres of influence in countries like Serbia, Bulgaria, and Hungary. Kirchick corrects the proclivity of the general American public to dismiss Eastern Europe as the “other” Europe, forever destined to follow the charismatic authority of iron-fisted kleptocrats. He explains why much of the populist nationalism, previously seen as native only to the region, is spreading west. The days of tsk-tsking Macedonians for their treatment of Roma from the safety of NGO forums in London are over. Now, Nigel Farage and Marine Le Pen crib their talking points from ethno-nationalists who, a decade ago, would have been limited to an audience of young men with shaved heads and white shoelaces.

In general, though, while The End of Europe offers a detailed account of the recent past, its diagnostic powers are more limited. Kirchick rightly observes that the original EU was not only about utopian dreams of defeating petty nationalism or building a heterogeneous society: It was a trade bloc. “The EU is, at heart, a utilitarian project,” Kirchick writes. “Countries ultimately join not out of a sense of war guilt or a belief that they ‘owe’ something to poorer Europeans, but because membership brings quantifiable material benefits.” Many countries also joined because they saw it as the lesser evil in the era of globalization. The sales pitch was one unified welfare state or 28 broken ones, yet Kirchick does not explore this social dimension of the economic compromise. He quickly labels the 2008 crisis as the result of “the unsustainability of the old social welfare state model” but does not give us any glimpse of people’s lives trapped in that socioeconomic arrangement and currently in grave danger.

Particularly in his treatment of Southern European countries, like Spain and Greece, that suffer 40 percent youth unemployment, unpayable debt, and an erosion of domestic political power, Kirchick takes up the prevalent line of cultural fecklessness. Rather than acknowledge that many loans were made to Mediterranean countries with full knowledge of their economic weaknesses, he exoticizes their politicians as stuck in a semi-European culture of bribes and nepotism that resembles the baksheesh practices of the Ottomans. Because of his lack of interest in the long-term effects of debt and austerity, he is not well positioned to explain social movements that grew out of this experience. He consigns SYRIZA and Jeremy Corbyn to the far-left fringe, despite both groups’ many political compromises and lack of violence or hateful language. He warns that “left populism portends the rise of a European hard left exuding the same authoritarian populism of the extreme right,” but beyond anarchists throwing a few rocks in Athens he never explains the source of this danger or its similarity to right-wing militias that prey on people of color.

Despite the fact that much of The End of Europe was surely written before the rise of the Trump–Bannon white nationalist White House, it does still feel like an urgent SOS from across the ocean about how worthy institutions can unravel with alarming speed. Kirchick lauds the spirit of compromise in the formation of the EU as well as in the deeds of a previous generation of European politicians, including Margaret Thatcher, Vaclav Havel, and Francois Mitterrand. Indeed, the EU was a project that transcended political divisions: The right liked its free market potential and the left supported it as a means to transnationalize the protections of the welfare state. Today, it is held in contempt by both anti-austerity socialists as well as ethnic nationalists. Kirchick convincingly argues that anti-EU sentiment has been whipped up by jingoistic Kremlin internet trolls, opportunistic fringe racists, and charlatans like Nigel Farage and Steve Bannon who made a bundle of money as financiers before sounding off against globalism.

The EU was born out of a banal French-German deal to cooperate on steel production; the aspirations of the federation have always outpaced its capacities. Despite his own ideological blind spots, Kirchick recognizes that the most glaring gap between rhetoric and reality is in the EU’s botched grappling with racial and ethnic tensions. He shows that the vainglorious promise of post-national society overshadowed small, but real, achievements. And he ultimately imparts the idea that the EU is worth fighting for. Those who want to leave are deluded by micro-issues and cynical manipulations, such as U.K. fishing regulations or sausage packaging. But those who truly understand the necessity of the European Union, Kirchick argues, are students of history who have not forgotten where the idea came from and what it was a reaction against.

Read the rest of the pieces in the Slate Book Review.