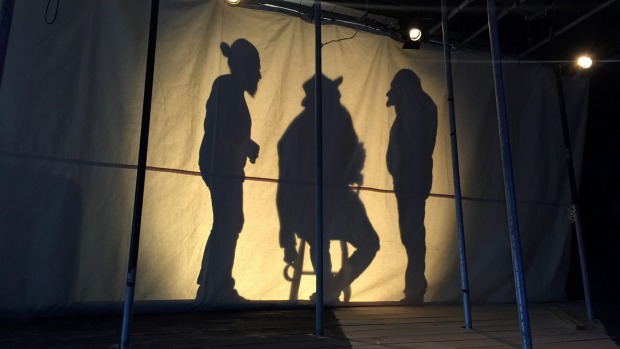 What happens when Christchurch’s beloved musical genre is refracted through the experimental lens of The Free Theatre?

The Black Rider is what happens – a heady mix of avant garde, blues, folk, Faustian pacts and warped staging.

It’s a musical, but not as you might know it.

The experimental theatre company is staging the New Zealand premiere of the “musical with a sting”,  which was created in 1990 by the avant garde power trio of writer William S Burroughs, musician Tom Waits and theatre director Robert Wilson.

The show’s star, singer-songwriter Delaney Davidson, sums up the approach.

“We’re presenting something in a classical format, but it is totally skewed.”

Free Theatre founder and The Black Rider director Peter Falkenberg said he was surprised the show has not been staged in New Zealand since its premiere in Germany in 1990.

“We want to do things that are popular, as well as avant garde. This is a show that at least in Europe was popular and avant garde. William Burroughs, Robert Wilson and Tom Waits. That is a wonderful mixture.”

The musical is an adaptation of a German folktale about a man who makes a deal with the devil to acquire some magic bullets that will make him an expert marksman. He wants to prove his hunting prowess so he can impress his true love’s father and win her hand in marriage. But, as in every Faustian pact, there is a fatal catch.

Falkenberg thinks Davidson is the perfect person to play the lead role of the devil.

“We have Delaney, who is an approved devil, I think, in New Zealand terms.”

But Davidson feels a little daunted by his first major stage role.

“I feel challenged, frightened, excited and nervous about whether it will come off or be my demise,” he says.

“I’m prepared to go on the journey. I’m just throwing myself into it.”

The design of the show also reflects The Free Theatre’s skewed take on the musical. Designer Stuart Lloyd-Harris has taken inspiration from the angular shadows and distorted perspectives of German expressionist films like The Cabinet of Dr Caligari and Metropolis. The show is presented in a traditional proscenium arch set up, but with a twist.

The stage is tipped forward and to the right and is framed by a warped proscenium arch. The devil’s underworld can be seen beneath the main stage and the live band are stowed behind a canvas sheet and can only be seen in shadow.

“It’s all about tipping things and being a bit skewed.  It is expressionistic, with shadows and back lighting.”

Davidson says they want to challenge Christchurch preconceptions about the traditional musical.

“We are helping people to free up the way they see things.”

“We are trying to redefine what is thought of as popular theatre. A huge amount of people would be interested to see something like this with themes of drug addiction, blues, a lost soul and a love story. The audience for that is bigger than popular theatre.’

He says Christchurch is losing its alternative scene to the rebuild.

“That is disappearing more and more in the rebuild as things are ironed out. You lose all the things where people have taken time to create their own little backwaters.”

Free Theatre manager George Parker said they are trying to create a rich and diverse theatre scene in Christchurch.

“A lot of the theatre here is not adventurous and doesn’t push the boundaries,” he says.

“We are trying to provide a genuine artistic laboratory where we can play around, work with different forms and bring different performers together and create something genuinely new, which is a risk. “If success is measured by bums on seats then we are destined for a monoculture. We want as many people in here as possible, but there needs to be other measures of success.

“If you provide diversity and different perspectives, rather than just the blockbusters, you will have a much richer and more diverse culture.”

* The Black Rider runs at The Free Theatre in the Arts Centre from April 21 to May 6.