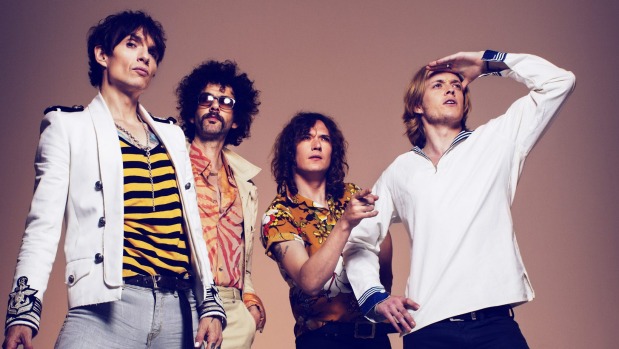 We could be on another planet.

Dan Hawkins, lead guitarist from rock jokers The Darkness is on the line, but we are talking over each other and there is no light to this darkness.

I’m early and he’s slightly late as he crosses Putney Bridge on his way towards his favourite cafe in London for our chat, but the three second delay on the phone line isn’t helping and I’m feeling stranded at the arse end of the world.

At that, the skies clear and I can hear Hawkins loud and clear.

Hawkins and his bandmates have been in New Zealand before, for the late and lamented Big Day Out Festival, but it was all such a blur.

“We basically, just flew into Auckland for the gig and then flew out again,” he says.  “That’s the reality of touring though. From what I did experience, it felt like home. I don’t know much about the geography of New Zealand though. We are playing Wellington this time around.  Where’s that?  Is it part of  the undergrowth?  Do you have a mountain? Unless you have a mountain we are not interested.”

Ah, New Zealand was where Lord of the Rings was shot, so yes, we do have a mountain or two. He blethers for a moment about his inability to grow a beard, then says: “Sorry, I know this isn’t much of a music interview but I can’t help myself.”

The Darkness, if you are of an age to recall their beginnings, broke out big in 2003 with their hit single I Believe In A Thing Called Love and and debut album, Permission To Land. Fronted by Dan’s brother Justin – a former jingle writer – who had a soaring falsetto that recalled the ghost of Freddie Mercury they were one part seriously comical another comically serious.

Their videos were weird, humorous and often piss-takes of themselves … this is a band that has never quite learned how to take itself too seriously.

“Yeah, a lot of your videos are a bit mental,” he says. “You can forgive people for asking us if we are a serious band, which they have throughout our career.  We like to amuse ourselves and have a bit of fun.  We are just big kids, who like to dress up and do weird things.

“In many way, all bands really are comical versions of bands that have gone before them. We are just a comical version of ourselves.  Nowadays, so many artists are scared they won’t sell so many records if they upset someone or don’t have the right image that you wonder if they are having fun.”

The Darkness certainly had fun, maybe too much. In 2005, internal upheavals forced them into temporary retirement. Justin went into drug rehab, and Dan and the other members of the band formed Stone Gods.

“For a long time it was 100 percent done and dusted for me,” says Dan Hawkins.  “It was only when we were in different bands that I started to hang out with Justin again and it wasn’t long before we both realised how much fun it was hanging out together.  That is the most important thing about being in a band.  There is no point if you are not having a good time.  I realised I missed my brother. So here we are.”

The reunion became official in 2011 and there have been two albums since – Hot Cakes and Last Of Our Kind.

“When we were kids growing up in Lowestoft, Sussex, we were quite different,” he says. “We used to fight all of the time.  We just clashed on so many different things.  The things we did agree upon, we could only afford one of them, so we would fight over that.  We shared the same room.  We had this sort of Victorian upbringing and I think that was the main reason why we  didn’t always get along because we both felt suffocated in some ways but showed it differently.

“Justin moved out when he was 16 and we became really good friends. Apart from that one major falling out, we have been ever since.  Being in someone’s space, even if you love them to bits, can be a really hard thing to do.  That was one of the main reasons the band initially split up.  Also Justin had to get his s— sorted out.”

By the time they head to New Zealand, the band hopes to have completed a feature length documentary, which is a warts and all insider’s glimpse into “the darkness”.

“It’s the Darkumentary,” Hawkins says.  “These guys have been hanging around like a really bad smell.  We had a photo-shoot with some mates and they just kind of stuck around.  They said ‘do you mind if we just tag along with the band and do a bit of filming?’ They just wouldn’t go away, they kept following us around.

“It’s a bit like having gaffer tape stuck to your shoe – even though you take the tape off you can still feel its stickiness on your shoe.  That’s what it’s been like for the past year  It’s reaching its final stage.  There are now producers involved.  They way they put it, it is a rags to riches to rags story.  We will never be seen in the same way again.”