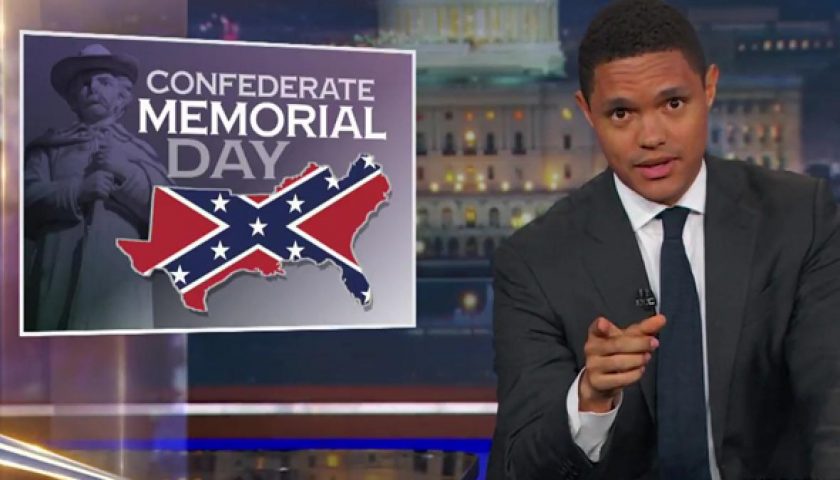 Trevor Noah took a look at one of the United States’ strangest, vilest traditions on Wednesday: Confederate Memorial Day. It’s always interesting to see Noah, who is South African, try to navigate the depths of American white supremacy, and in this case it’s something of an emperor-has-no-clothes moment: Noah’s incredulous reaction is a vivid reminder of what a shockingly evil idea Confederate Memorial Day is to begin with. It’s a real pleasure to watch him tear into the Confederate apologist excuse that these long-dead losers should be forgiven because “They didn’t know what they were doing was racist”:

First of all, yes, they did. But even if they didn’t, you know that now. So what’s your excuse? Why are you putting on the uniform? It’s like saying, “You can’t judge a baby for shitting in his pants! He didn’t know better! And that’s why today, in honor of that baby, I shit in my pants!”

Noah also pulls in some clips of Confederate statue-humper Corey Stewart for comment, though Stewart doesn’t get around to explaining how someone from Minnesota (24,000 Union troops, 2,500 dead) fell in love with Robert E. Lee. Like Confederate Memorial Day itself, though, we’re sure it doesn’t have anything to do with white supremacy. In this day and age, that’d be ridiculous.