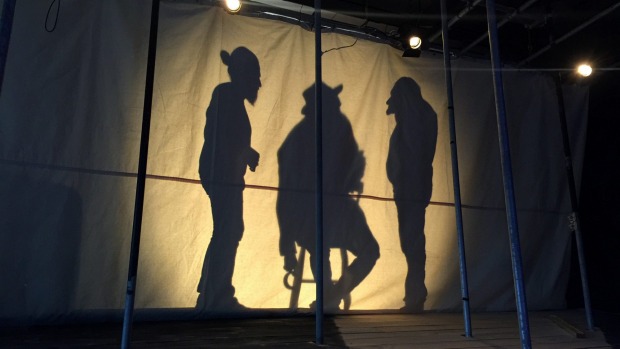 The songs at the heart of this warped and twisted musical are as barnacled, magnificent and romantic as a sunken shipwreck.

Written by legendary American singer-songwriter Tom Waits, they are performed with the perfect mix of circus melancholy, bourbon-soaked blues and Kurt Weill glamour.

I just sometimes wished there was less play between the songs. Slicker pacing could easily knock half an hour off this two-hour musical and it would be punchier for that.

The script by American novelist William S Burroughs is as dark and gnarly as you might expect, but when the poetry sometimes veers into incoherence, you feel yourself Jonesing for the next beguiling song.

At one point I heard an audience member whisper to his theatre buddy: “It’s Dr Seuss for adults”.

The musical is adapted from a German folk tale about a man who makes a deal with the devil for some magic bullets that always hit their target. He wants to win his true love’s hand in marriage by impressing her father with his marksmanship.

But the deal comes with a Faustian sting and each magic bullet drags him further into a strange addiction.

The show clearly draws on Burroughs’ real-life struggles with heroin addiction and the death of his wife after he drunkenly shot her in a bar.

Christchurch singer-songwriter Delaney Davidson is a twisted delight as the hobbling, grinning and gasping devil, luring in another dupe with promises of magic bullets. He perfectly captures Tom Waits’ unique cadence, while still remaining true to his own musical style.

The show is also handsomely staged, drawing on German Expressionism to create an angular and warped world of shadows, intrigue and trap doors.

The band conjures beautiful music and atmospheric soundscapes while silhouetted in perfect German expressionist shadow behind a canvas. The dense and textured soundscapes include everything from evocative birdsong, the warm crackle of old vinyl and the eerie whine of a saw played with a cello bow.

There are some beautiful moments – like when the two lovers soar above the stage on a pulley that sends one aloft as the other descends and when the devil gives the main character his first taste of a magic bullet.

But the show could feel too freighted with its own mannerisms and a need to spell out the theme and subtext in block capitals.

A little judicious editing would ensure the shows skips delicately from one magical moment and beautiful song to the next.

When you have songs as soulful, beautiful and warped as these, and they are performed with such skill, you should let them shine.