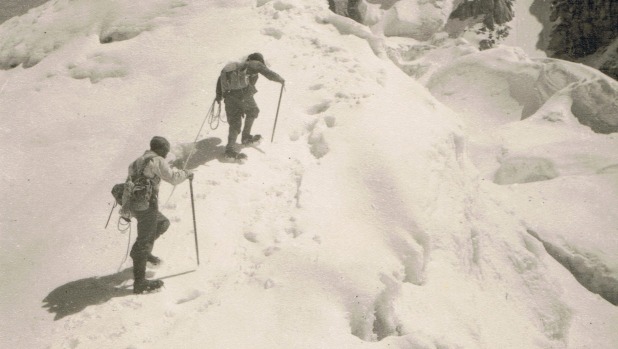 In 1951, four New Zealanders headed to the Himalaya to climb. Their primary objective was a previously unclimbed mountain called Mukut Parbat.

Two of the Kiwis – Ed Cotter and Earle Riddiford and a Sherpa guide named Pasang Dawa Lama – reached the summit.

The other two Kiwis – Edmund Hillary and George Lowe – turned back below the summit.

This successful expedition led directly to an invitation to join a British Himalaya expedition that was getting underway.

Two years later, in 1953, two of those Kiwis were part of the the successful assault on Everest, achieved of course by Hillary and Sherpa Tenzing Norgay.

Within days Hillary was knighted. He became an explorer, philanthropist and diplomat. He’s on the $5 note and arguably the most famous New Zealander.

So the two Kiwis – Riddiford and Cotter – who achieved something significant in 1951 weren’t on the British Everest expedition in 1953, while the two Kiwis whose 1951 achievements were lesser were on Everest in 1953.

In 1953, if the world was fair, Hillary should have been tending his bees in Auckland and Lowe teaching school.

So how did this happen?

Christchurch writer Lyn McKinnon’s book, Only Two for Everest, explains it all. While not a revisionist history of the Heroic Age of Kiwi mountaineering, it is a set-the-record-straight account how four New Zealanders could have climbed Everest but only two were chosen.

“It was such a close shave,” says McKinnon.

It was July 11, 1951 and the four Kiwis and Pasang were attempting Mukut Parbat, a 7242-metre (23,760-foot) peak on the Indo-Chinese border. From the highest camp, Hillary and Lowe on one rope set off about 8am, 10 minutes before the second rope.

After hours of climbing, the five stopped together for a rest. When climbing resumed, Cotter, Pasang and Riddiford took the lead.

Hillary and Lowe believed the trio would soon turn back. At this altitude on a Himalayan ridge, passing other climbers was dangerous. So the pair stopped climbing and started watching. Cold eventually forced them back to their tent.

The trio kept going and peaked about 5.45pm. They got back to camp just before 9pm.

It was a “horrifying miscalculation”, writes McKinnon of Lowe and Hillary’s decision to stop climbing. They were, she concludes, “outclimbed”.

By August 1951, the four Kiwis were resting in northern India.

Some of the British Everest reconnaissance expedition was just then passing through India and indirectly received perhaps the most famous telegraph message in NZ history. Sent by the New Zealand Alpine Club to its British counterpart, it read:

The initial reaction of the British leader, Eric Shipton, was firmly no. His expedition was deliberately small, many experienced British climbers had been turned down, money was short and permits hard to obtain.

Within days, however, Shipton changed his mind. The Kiwis had proved themselves in the Himalaya, they were fit and nearby. Critically, Shipton remembered an old Kiwi climbing mate named Dan Bryant. “I have never had a more delightful companion,” Shipton recalled later, “cheerful, humorous  and supremely confident”.

New Zealanders could join the British team if they provided their own equipment and permits and didn’t tell the media, Shipton ruled. But there was room for only two Kiwis. Shipton had never met any of them, so the New Zealanders had to decide themselves who would go.

All four wanted to join the Brits, of course. It was the invitation of a lifetime. How would they decide?

Badly, it turned out. A “bitter dispute raged throughout the night,” McKinnon writes.

It came down to personality. Riddiford was the NZ expedition’s leader. He’d conceived the plan, raised much of the money, overcome the subcontinent’s infamously tangled bureaucracy and climbed Mukut Parbat. Plus, he had cash.

Hillary declared himself the most fit. He also had money.

Cotter was super fit but broke. He was also retiring and modest. He put his case and then climbed into bed – and out of international climbing celebrity.

Lowe was fit but had few funds. Hillary sided with Riddiford.

​By morning, the Kiwis joining the British reconnaissance included one who had climbed Mukut Parbat – Riddiford – and one who hadn’t – Hillary. In a way, it wasn’t a bad compromise. But it didn’t last. Riddiford wasn’t invited onto the 1953 British expedition.

McKinnon gets this 1951 yarn “exactly right”, says Hugh Logan, a long-time NZ climber who is a past president of the NZ Alpine Club, current president of the Canterbury Mountaineering Club, an author on NZ climbing and had a long public career heading up the NZ Antarctic Programme, the Department of Conservation and the Ministry of the Environment.

In the early 1970s, when Logan was a young man attending Canterbury Mountaineering Club events, the old timers who knew the four guys on Mukut Parbat “gave me exactly the same story, chapter and verse”, he says.

“It’s a well-known story [in] mountaineering circles,” he says. “Lyn has brought it to a wider circle.”

McKinnon discovered that while Hillary and Lowe’s version of events has been well told – Hillary’s perhaps endlessly – Riddiford and Cotter had never told their story.

As it happens, the February 2011 earthquake ruined the Sumner, Christchurch, home of Ed Cotter. Out of the rubble came his 1951 diaries and photos. McKinnon then approached Riddiford’s family and she soon had his letters and photos.

The result was a 352-page dual biography of Riddiford and Cotter, a rebalanced version of the 1951 expedition, by the University of Otago Press. McKinnon, an educator and journalist, donates her royalties to the alpine club.

​There’s more to tell about Kiwis on Everest, of course, but these events are better known. Hillary impressed the British, Riddiford less so.

It didn’t help that the two Kiwis didn’t get along. “I can’t say that I actually liked him,” Hillary wrote of Riddiford in his memoir, View from the Summit.

Hillary lobbied for his mate George Lowe to join a 1952 British Himalaya expedition and three Kiwis contributed to the failed effort to climb Cho Oyu (26,906ft).

By 1953, Shipton had been replaced by John Hunt as leader of the British Everest expedition. Hunt selected Lowe and Hillary, but not Riddiford.

Even then, Hillary’s shot at the summit and life-long fame needed luck.

Two Brits were the first choice climbers to attempt the summit, on May 26. They turned back about 100m short, plagued by oxygen problems, exhaustion and lack of time.

Logan says Hillary peaked – physically, emotionally, constitutionally – at the right moment. Lowe too had peaked but was told to stay at Camp VII, the highest.

History is written by the victors. For 65 years, Hillary and Lowe essentially sanitised 1951’s events, especially who climbed Mukut Parbat and the night of bitter dispute, McKinnon says.

“People loved the Hillary myth,” she says, “but times pass”.

Riddiford became a Wellington solicitor and gentleman farmer and died in 1989. Hillary became Sir Ed and died in 2008. Lowe moved to England, became a schools inspector and died there in 2013, the last of the 1953 British expedition to pass.

Ed Cotter still lives in Christchurch and in his 90s is said to be frail. His son Guy is chief executive of guiding outfit Adventure Consultants, which offers trips across the globe including to the summit of Everest.

What might have been if Cotter had been more forceful or Riddiford had charmed the British?

It doesn’t matter. Hillary got a chance and knocked the bugger off.

Actually the line was rehearsed. Hillary used it in 1951, after climbing a lesser peak while on the NZ expedition.