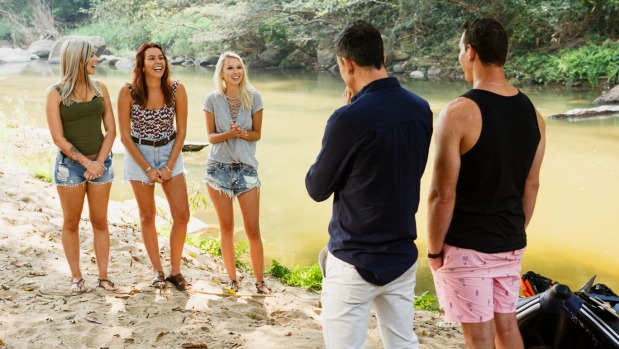 With a stirfry in my tummy and a riesling by my side, I thought I was set to watch the Bachelor for another week.

But I was not ready for what came next, the revelation that intruder Karina had dated Dominic Bowden.

This could definitely ruin the beautiful relationship Zac has with his best bud Dom.

What will Zac think? Will this cause a riot? Lets talk about the rest of the episode first.

This week they have changed things up and the group date comes first this week.

Viarni, Ally and Karina are off on the group date with Zac and of course Dom because the show wouldn’t work if he only went on single dates with Dom.

Karina aka Ivanka Trump is worried because it turns out the chosen activity is white water rafting and that is too dangerous.

She gets in the boat despite her dramatics and insistence she might drown.

I would be worried though because although Zac is a ‘kayaker’ he doesn’t look like he really knows what he’s doing.

Viarni splashes Zac and sets off a big water fight that is probably riddled with e coli and water-borne diseases.

Karina changed her mind and decided she does love white water rafting maybe just in time to get one-on-one time with Zac.

Sorry girl, too little too late. Viarni won not only single time but a kiss and a rose.

‘The Mol’ FINALLY gets her single date and it is the incredibly romantic date of rice planting.

“I appreciate rice but I don’t eat it,” says Molly.

Flatmate Jono and I don’t understand but we both agree this is the most bro date ever.

Who takes a girl rice planting where she has to change out of her beautiful dress and ruin her good $10 shoes.

They than play a romantic game of jenga asking each other random questions written on the bottom of each block.

Yet again, the show hits a very serious note and Molly brings up that she used to have a serious drinking problem.

I was not expecting this but it was nice to hear Molly open up to Zac.

Although the pair are cute, I feel Zac may have a deeper connection with Dominic Bowden at this point.

This is the point in which the bombshell returns.

The rest of the girls find out that Karina dated Dom and they are absolutely livid.

How dare she come on this show and try and take Dominic’s true love away from him. It must be an act of revenge.

Rosie and Ally corner Karina and a cat fight ensues.

“Personally I don’t think this has anything to do with him [Zac],” says Karina.

Babe it has everything to do with Zac because bros don’t date other bro’s exes.

But in her defense she hasn’t been around long enough to witness the greatest bromance to ever grace the earth.

The cocktail party is now underway and it is just the same old situation.

The girls are starting to get nervous and are fighting over Zac like vultures.

Jess recites a poem to Zac and receives a rose and the Mol looks absolutely incensed.

What on earth did she do wrong, she isn’t ready to go home.

Karina grabs a moment with Zac and confesses to her previous indiscretion.

However, Zac doesn’t actually care and gives her a rose for her honesty.

“That black-haired girl is going to lose her mind,” says flatmate Jono.

In fact Rosie almost did lose her mind, holding it together only just, at the news Karina received a rose.

Before another cat fight could break out, Zac was called away and another rose ceremony got underway.

After Ally, Viarni and Karina receive roses the Group Date Curse finally breaks because that storyline had well and truly run its course.

It turns out Molly’s single date wasn’t enough to keep her around and Zac sent her packing.