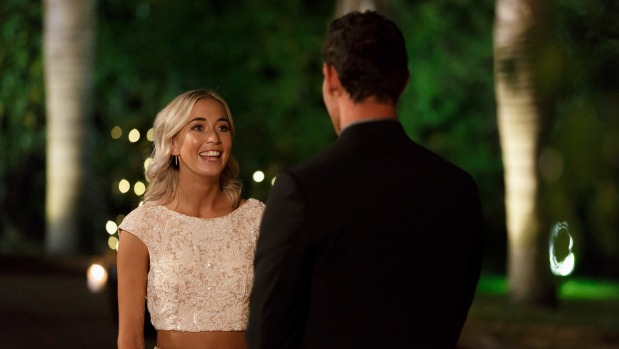 This week on The Bachelor we were told “everything has changed”, but really it is just the same old show.

A group of ladies competing for Zac’s heart, except they actually get to escape the confines of the secluded mansion.

They will travel across the world to Chiang Mai, Thailand to spend their time stuck in a hotel instead.

Possibly the only thing that would convince me to join this show would be the international travel.

READ MORE: * $30k fine if Bachelorettes speak out * Bachelor recap: Curses, crystals and chickens * The Bachelor NZ: Katey just not ready to settle down with anyone * Bachelor recap: Girls sway to Zac’s beat and finally the claws are out

Zac flies business class on Air Asia while everyone else sits down the back of the plane next to the bathrooms.

However, Zac chooses to make his flight a little more interesting and invites Lily to join him up front.

“I feel like one of those… arm candy,” says Lily giving the camera a cheeky wink.

They arrive in the beautiful lush city of Chiang Mai, but instead of admiring the view, everyone else is more concerned about who will get the first date.

Turns out after a very prompt ad break it is Hannah, the dark horse of the competition.

The pair go off-roading on a quad bike, getting to admire the beautiful view, which even features some elephants.

Hannah gets presented with a Hibiscus flower as the date went so well.

“Some assistant is getting fired because they couldn’t find a bloody rose in Thailand,” says flatmate Jono, who has joined me for another week of Bach banter.

Dominic Bowden has interrupted yet another yoga party and either they are staged or he is doing it on purpose.

The Group Date Curse is alive and well as everyone is going on the group date, meaning one of them will definitely go home.

Bowden isn’t done yet though, throwing another spanner in the works.

He tells Zac he is going to meet three new girls.

Intruders Karina, Sarah and Vanessa have been thrown into the competition like cats among the pigeons.

Zac gives new girl Sarah a rose. This is very confusing and i’m not sure I will allow this.

Turns out the original girls are just still sitting around waiting for Zac like some group of 19th Century women.

“Maybe if we say his name three times, he might appear,” Molly says.

Just as she says that, everyone loses the plot as they see three strange women approach them.

Bel is not coping and Molly has flipped her lid.

Zac arrives at the group date/cocktail party and no-one was particularly happy to see him.

Except Nina that seizes the opportunity to steal Zac away.

The group date did indeed turn out to be a cocktail party, which has now turned into a rose ceremony.

“I’ve heard that one of out new ladies has a rose,” Dominic says, sending the party into an absolute spin. Again.

Nina gets called forth and this is something that shocks Lucia to her core.

But even more shocking was that Lucia got sent home.

However everything will be fine, Lucia can go home to Katey and live happily ever after.

The Bachelor NZ: Season 3 airs on Sundays at 7pm and Mondays at 7.30pm, on Three.