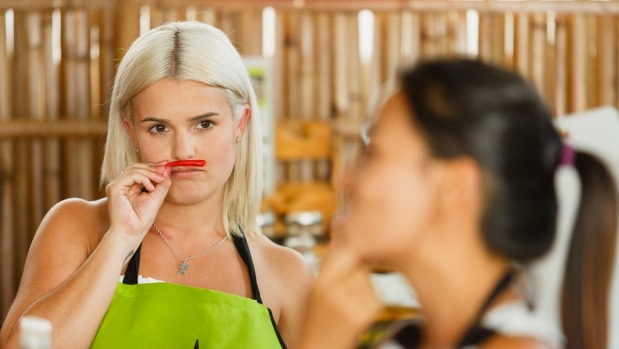 OPINION: It’s episode eight of The Bachelor and the circus has come to Chiang Mai.

We’ll never know what the people of Thailand did to have this inflicted upon them. Did the show’s producers score a big backhander from Thailand’s tourism agency? Probably. But that’s not important. The real mystery here is Rosie.

Bachelor Zac Franich thinks the Christchurch native has a “unique, mysterious charm”, and has picked her for Monday night’s single date.

Speaking of mysteries, here’s another: why did Zac choose a woman who, by his own admission, is one of the least sporty bachelorettes for a date of hiking in the hills and swimming at a secluded waterfall? Could it be that his choices are totally dictated to him by the show’s producers?

Enough questions. Rosie meets Zac in a remote-looking Thai village which appears to be inhabited by a single man and his impressive flock of ducks.

They’re met by a Thai guide, who despite by all appearances being an absolute legend, doesn’t even get one of those titles with his name on the bottom of the screen. With his help they navigate a wide, mostly flat and well-bridged track through the hills.

“Are there any snakes around here?” Zac asks him. Check your shorts, mate. But seriously, there are, like, vipers and stuff.

“Do snakes run out at you, or are they more scared of us?” Rosie wants to know. Rosie, snakes can’t run. They don’t have legs.

Eventually they come across a shaded waterfall, where it’s time for a swim. Cue shots of shirtless Zac and Rosie in a bikini.

Things go awry when Zac gets his Bear Grylls on and climbs the waterfall for no reason. Rosie tries to follow and slips, gashing her knee. Just when it looks as thought we’ll finally get to check out Zac’s lifesaving skills, it turns out she’s fine.

Zac is not particularly sympathetic: “How’d you go and do that?” he says.

“It is so embarrassing to be so ungraceful in front of Zac,” Rosie tells the camera. “But that’s just me, you’ve got to laugh it off.”

Back at the hotel (the show insists, for continuity purposes, on calling it a mansion) the other women are at the poolside. Where else, right?

There’s tension because of the new blood; the “intruders” (yes, that is actually what the show calls them. They get a little tag with it whenever their head pops up on screen) thrust upon the competition on Sunday night.

Ally says the group dynamics have changed – a rift has emerged between the OG bachelorettes and the three new additions to Zac’s harem.

But Molly is cross for another reason. “He’s missing a prominent member on these dates,” she says. Lord, has Zac had some kind of horrific accident? No. The prominent member is her. Molly’s cross because she still hasn’t got her single date.

Another grump is newcomer Karina. As one of the “intruders”, she’s having a hard time settling in.

“The girls are all quite young and they seem to be quite – not like me,” she says, apparently oblivious to the fact she is 23. Maybe she’s just wise beyond her years. There is something kind of cold about her.

I tell you who is not cold is Rosie, who gets to warm up by a fire their Thai guide been busy working on while she was falling down the rocks. He’s cooked a mean feed on the coals, and he leaves them to eat it without even a nibble for himself, poor guy.

The banter between these two is stilted and weak, so it’s no surprise when Rosie doesn’t come home with a rose.

The next day it’s time for the group date, and once again it’s going to involve cooking for Zac. Seriously, is this the 1950s? Or does Zac really just wish he was a MasterChef judge? Yet more mystery in the mystical Orient.

The women picked for the date (I can never keep track of them all) get to browse a Thai market for ingredients that they’re going to use to make green curry (authentic, right? Definitely needed to go all the way to Chiang Mai for that).

Never far from the action, host Dom Bowden is on hand to set the scene. “We all know Zac loves his food,” he says. “But would you believe that Thai is actually his food of choice?”

“I guess I just love the flavours,” Zac says. Yep, we’ve got a real foodie here.

Another anonymous Thai character – this time a chef – is on hand to guide the women through the rigours of making green curry paste.

“Listen to your heart,” she says, before telling the women (and, to be fair, Zac, who looks surprisingly at home in an apron) to bash the ingredients in a mortar and pestle like it’s the face of someone they hate.

Miss “ginormous t….” Claudia attacks hers with a surprising fury, which the show tries to connect with “intruder” Vanessa. Her curry is judged best – clearly rage is the key ingredient in any half-decent curry.

She and Zack get to eat their curries together. “My hands get sweaty when I talk to you and I don’t know why. You make me nervous,” she tells him. Hot. Hot like curry.

Finally (finally!) there is the cocktail party. They must be getting sick of these by now. There’s a weird ritual to them – the women quaff champagne while Zac picks one at a time for some solo banter.

It’s at this party that Zac reveals his inner dorky dad-magician, coming up with a host of (well, two) ingenious ways to sneak roses to favoured women. Rosie and Lily are both on the receiving end of some Franich magic when he pulls them aside.

Zac has cleverly reversed Lily’s questions-written-on-the-thigh trick, writing some questions on his arm – a little less sexy, but points for effort.

“What is your favourite part of me?” he asks her.

Lily scrambles for some kind of answer.

Dom appears to break up the party, taking Zac away for his manly confession before the rest of the roses are handed out. (Returning to our ritual comparison earlier, there is something kind of priest-like about Dom’s role in this show. He is totally celibate, and plays the role of confessor as well as making sure all the particulars of the ritual are adhered to. Man this show is weird.)

Finally, the roses. Look, I’ll spare you the drama and tell you: Nina goes home.

For a moment, I was actually kind of outraged. She is, hands down, the most likeable person on this show. She is the only one who seems to have some understanding of how weird the whole situation is. She echoes what the viewer is thinking. We relate to her. On top of it all, she actually seems genuinely keen on a relationship with Zac.

I think it’s clumsy how the show has set her up as our kind of guide to the show – the protagonist, if you like – only for her to be booted off in the early stages. She made The Bachelor kind of relatable. I feel like we’re lost without her.

At least she has the guts to stick it to Zac on her way out. Through the tears, she says: “I feel like you didn’t really give me a chance.”

“I go off my gut feel,” he explains, and suddenly it all makes sense; Nina must have stuffed up her curry.

Next week we’re promised some real drama, including beeped-out expletives. The circus rolls on.